For This Year’s Blog Celebration: “Mario’s” 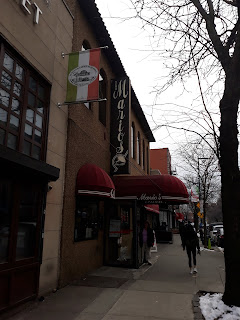 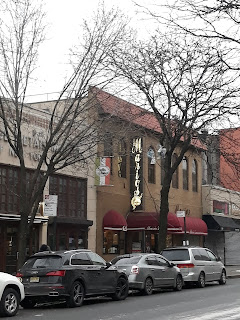 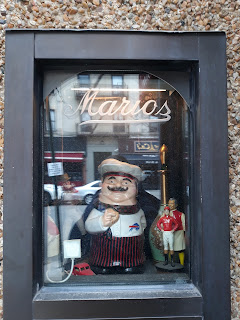 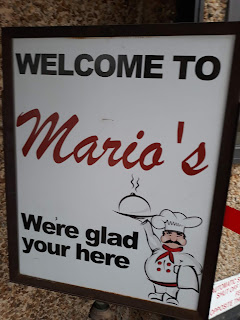 My blog turned eight years old on March 2nd of this year.

That day I did all of the things I really love. I spend a good portion of the day in the kitchen cooking recipes from Chrissy Teigen’s lastest cookbook. I did a bit of writing, and ended my day having a glass of wine with friends. It was picture perfect.

But as much fun as it was, that was no reason I couldn’t take my celebration on the road. So I did. My mother and I met up with a couple of our cousins in a place I have done a lot of writing about; Arthur Avenue.

Arthur Avenue is a large thoroughfare in the Bronx where there seems to be nothing but classic Italian restaurants, shops, and bakeries.

I discovered the interesting history behind this legendary street when I wrote about it one Find Out Friday;  “Who Puts the Arthur in Arthur Avenue? That made me all the more eager for my visit over the summer. During that visit I had lunch at Zero Otto Nove and then dessert at De Lillo Pasticceria.

Since then it has been the goal of both me and my mother to hit up every other restaurant on that avenue as a means of comparison.

Did I mention I love my job? 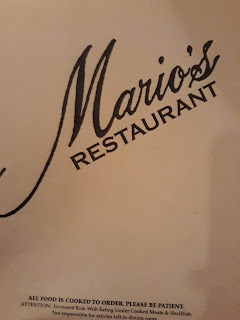 We entered Marios’s and were immediately seated. There were a few other tables occupied but overall it wasn’t too crowded. I was starving and had been craving chicken parmesan all week, so I knew that was what I was ordering. 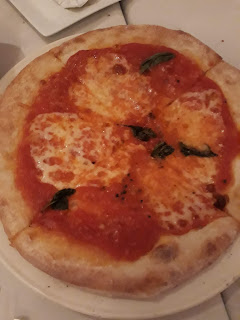 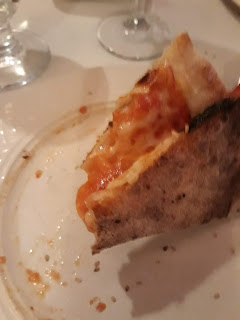 For an appetizer we decided to share the Margherita pizza. The cousins I was dining with have spent a #pizzaFriday or two with me, so this order was a no brainer. The pizza was incredibly delicious. Some would even say the best on Arthur Avenue. However, it is only the second slice I have had here. The first being at Zero Otto Nove.

In an ironic twist, I have now discovered that Mario’s started out as a pizzeria!! What are the odds?! It certainly explains how such a small slice of pizza had so much flavor. The recipe is the result of many years of one family’s talent and hard work.

Mario’s is currently run by Joe and Barbara Migliucci, the fifth generation of the family that first opened the doors nearly one hundred years ago.

After the Arthur Avenue Market opened next door, the Migliucci’s decided to close up their pizza shop and instead create a full service restaurant cooking the classic Southern Italian dishes they grew up with. 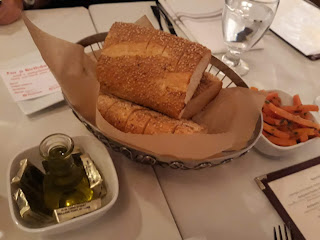 I suppose it was this long legacy that inspired author, and fellow Mario, Mario Puzo, to write a scene in his best selling novel; “The Godfather”. Here, at Mario’s is where Mr. Puzo envisioned Michael Corleone killing Solazzo and Captain McCluskey. When Frances Ford Coppola was directing the movie version he approached the restaurant for permission to film that scene here. They passed. Mario Migliucci didn’t want his restaurant associated with murder, even if was fiction. It appears that decision didn’t impede his restaurant’s success at all. 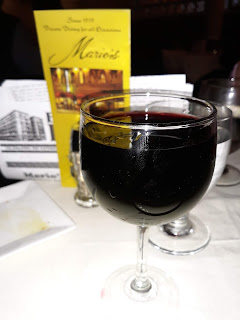 When it came time to order our entrees, I made a last minute decision. Instead of the ordinary chicken parmesan, I ordered the chicken a la Mario, which was essentially chicken parmesan but with a layer of ricotta cheese under the mozzarella. I was sold! 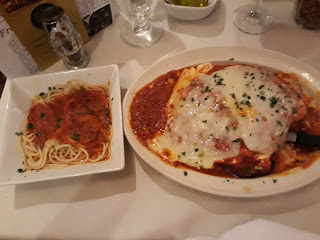 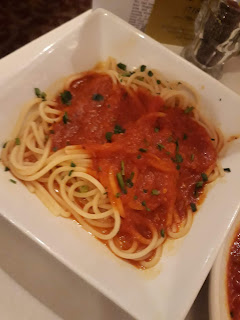 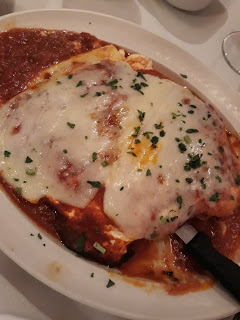 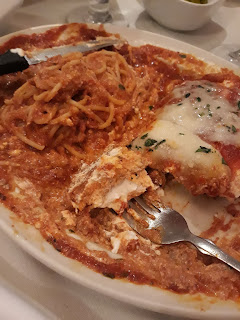 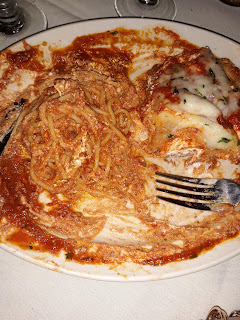 Not long after we ordered, my meal was placed in front of me (including a side of spaghetti). At first glance it looked as though there was more than one chicken breast was swimming in the flood of marinara sauce. Well, it was just one. The texture and thickness I had mistaken for chicken was actually the cheese!!

As soon as I saw this dish, in all its glory, I knew I was going to love it. The chicken cutlet was thicker than I normally prefer, and I was surprised how delicious it was. Somehow, despite the piles of cheese and sauce, the chicken cutlet still have a significant crunch to it!

If you read my previous blog about “Doughology" you know how important a good crunch is to me, no matter what I am eating. This meal certainly had that.

It also had a great, flavorful sauce, that I mixed all over my pasta and continued to dip my bread in.

As I cut into my chicken, I managed to get my first ever cheese-pull. It wasn’t an epic pull, but a pull nonetheless.

Take a look to see what I mean.

I ate more than half of my chicken and pasta, way past the point of being full. And though I was, I still managed to have a glass of wine with dinner, and then an amazing cappuccino after. Alongside the cappuccino, my table shared a piece of creme brûlée cheesecake. This is where my meal took a turn for the worst. 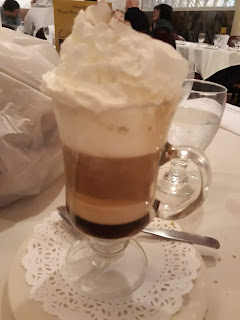 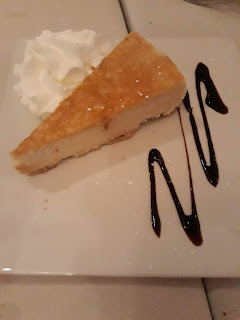 I thought the cake was dry and didn’t have the flavor I expected. As a HUGE fan of traditional creme brûlée, I was hoping this was the perfect combination of my two favorite desserts. Alas it was not. I should have gotten a piece of Italian cheesecake instead. That was what I was originally thinking of. By now I should know to always trust my gut. 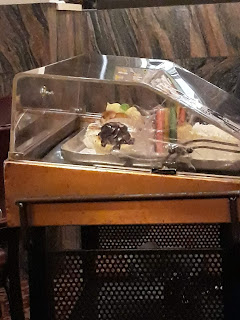 My meal at Mario’s was so good I spent the following weekend trying to replicate it at home. As you can see from the photos below, it came out pretty good. 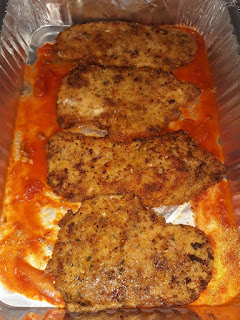 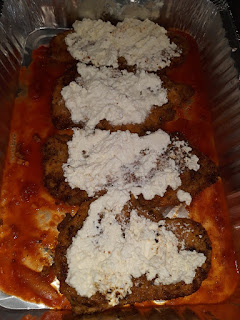 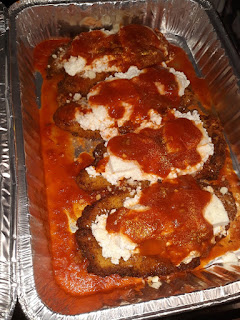 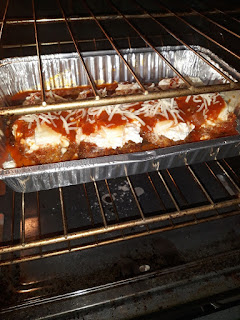 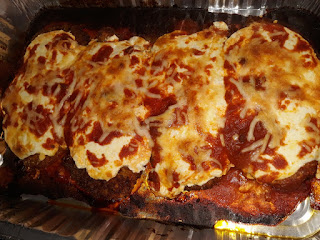 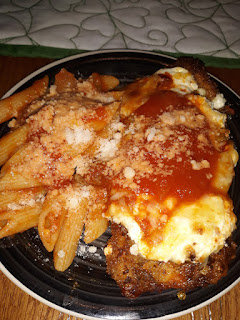 In fact, not long after this meal I had a classic chicken parmesan at another famous Italian restaurant; Gargiulo’s (https://bit.ly/2HO3jIT). Sadly I couldn’t have been more disappointed, yet again (https://bit.ly/2YDrdfj).

The left overs I brought home from Mario’s and ate cold (because I was too lazy to heat them up) as I leaned over my kitchen table, were still a thousand times better than this restaurant’s version. Even my version was better.

I guess Mario’s has ruined me for every other Italian restaurant.

But I suppose the only way to prove that theory is to continue eating my way down Arthur Avenue.