For Find Out Friday - Are You Team Quiche or Team Soufflé? 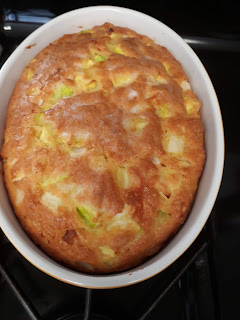 At the beginning of this week, Monday to be exact, I made my Aunt Linda’s zucchini soufflé for #dinneralaDonna. I referred to it as a soufflé because that’s what I grew up calling it but as I mixed the batter for my dinner, I realized it seemed an awful lot like a quiche I made not that long ago. I had to know, what is the actual difference between the two?

According to the Merriam-Webster dictionary site, a quiche is: “an unsweetened custard or pie usually having a savory filling (such as spinach, mushrooms, or ham)”.

The same site defines a soufflé as: “a dish that is made from a sauce, egg yolks, beaten egg whites, and a flavoring or purée (as of seafood, fruit, or vegetables) and baked until puffed up”.

That didn’t help me one bit.

To further complicate matters I remembered about the less common yet similar food group that is the frittata.

Then I found fellow writer Erin Nudi’s post (see last link below) that made things clearer.

According to Erin these are the things that separate the three.

A classic quiche is made with eggs, cheese, and cream. It also usually has a crust, or some sort of pastry base. It is pie shaped and baked in the oven.

A soufflé contains eggs, cheese, and milk. There is a special mold it is baked in and mostly commonly sweet but can also be savory. The most important aspect of this dish is the puff top which is so light and airy you have to be extremely careful when removing it from the oven so as not to deflate it.

Whereas a frittata is made with eggs and cheese, it usually does not contain cream or milk. Once again it can be pie shaped, but begins its cooking journey on the stovetop before taking a trip inside the oven. That last step is also what makes it different than a plain old omelette. Well, that and I always blend some cream or milk in my eggs because I like it that way, although I know many folks who would disagree. A spoonful of cream cheese doesn’t hurt either.

Considering all of this information my main question is: What the hell did I make?

First of all, almost everything I make has a fair amount of dairy in it including milk/cream and cheese, even if it’s vegan. My “quiche” did not have a pie crust because I do not care for store bought pie crusts and making one seemed like too much work for a so-called simple dinner.

Secondly, I do not have a soufflé mold and I have several dishes that are circular in shape that I use often no matter what I am baking. 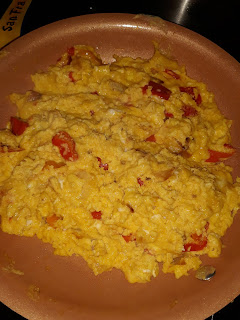 Lastly, I know for sure is that the eggs I made for dinner this past Thursday were part of an omelet not a frittata.

I now suppose that both my quiche and soufflé were the same unnamed thing; a hybrid of the two traditional forms of these meals.

More importantly, they were all delicious.