For My Birthday Dinner in Williamsburg: “Emmy Squared” 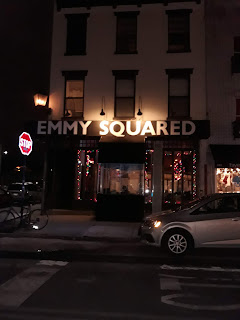 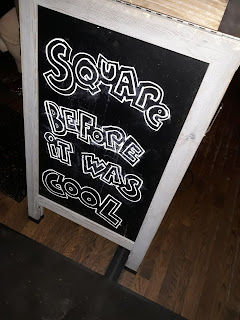 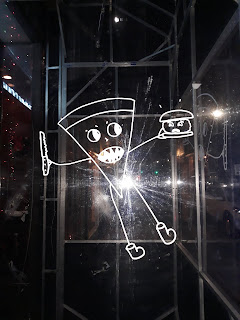 Because I feel every birthday should be celebrated whether it is a “special” number or not, I dragged my extremely jet lagged butt out on my birthday.

I had flown home from Phoenix on a red eye flight and landed at 7 a.m. on a Monday, the morning of my actual birthday.

Though I was desperately exhausted I was unable to sleep. Instead I decided to power through just like on the many nights I suffer from insomnia, although I was more grouchy than normal.

F.Y.I. - I am never pleasant when suffering from post vacation blues and this time it was worse because I had just gotten used to seeing my best friend every day and now I was having some separation anxiety.

But it was my birthday and I had plans.

First up I went to my local pizzeria for a slice for lunch. 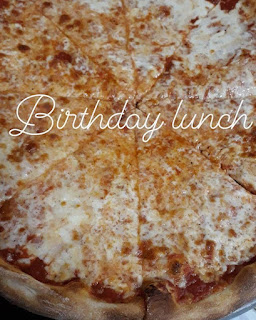 Frank’s (https://bit.ly/2WpXJ3L) is nothing fancy but I am wild about their regular slice, especially when it comes right out of the oven, well done, served up on a sliver circular tray.

Afterward I hit up Starbucks and came home to relax. Before I knew it I had dosed off on the couch. Once again I rallied because I had my heard set on trying a newly minted Williamsburg institution for my birthday dinner; “Emmy Squared”.

“Emmy Squared” is a love story. Not only a love story of pizza but of the couple who owns it: Emily and Matt Hyland. The pair met in college and their first of many meals together was a pizza. That is the kind of love story I long to call my own.

“Emmy Squared” has three locations: Williamsburg, Brooklyn; West Village, NYC; and Nashville, Tennessee. The Williamsburg location opened in 2016 and was the first of this chain to open. However it was not the first (pizza) restaurant the Hyland’s begun.

Back in 2014 “Emily” opened in the West Village (there is also now a Brooklyn location) and was a culmination of Matt’s culinary training and recent stint learning the art of pizza at locations such as “Pizza Moto”. Ironically I have just recently visited the old stomping grounds of Matt Hyland and that review will be posted shortly.

This first foray into the pizza business is an important part of the “Emmy Squared” story. After having succeeding here it was Matt’s desire to expand his brand and open a pizza joint where being “square” was all the rage.

To my knowledge he is the only business owner to simultaneously have a round and square pizza place. I admire his thinking outside of the box.

The thing about Detroit style pizza is that while square shaped like a traditional Sicilian pie, it is about half the thickness. It has more crunch because there is less dough between the topping and the crust on the bottom. That allows you to eat much more of it! 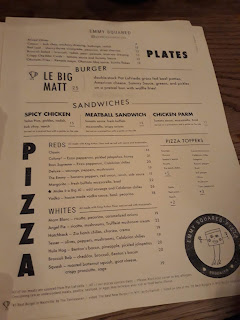 Legend has it that Detroit style pizza, while obviously originated in Detroit, came about because of the type of pans used to bake the pizza in. They are blue steel pans that were formerly used to hold tools near the assembly lines that were so instrumental in the building cars. Thus, the result is a thin square shape that makes this style of pizza so recognizable. 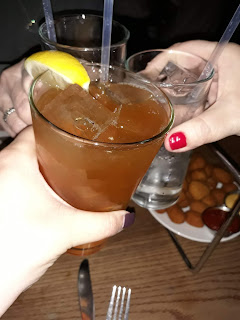 Now that we know the history of the style and place I had my birthday meal at, we can get to the best part; the food!

I knew my order WAAAAAAAY before I sat down in this small yet cozy restaurant. 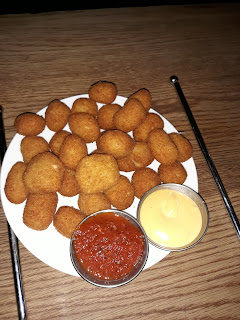 My party began with the crispy cheddar curds as an appetizer. They are essentially like the midwestern version of the mozzarella stick. They are square (coincidence I think not) small sized bites of fried white cheddar cheese. Here they came with a side of both marinara sauce and spicy mayo.

I love just about anything that has cheese especially if it is fried and since I have not yet visited the state of Wisconsin (known for their cheese curds) I was eager to dig in. Needles to say I greatly enjoyed these. They were heavy in texture but I could not stop popping them in one after another. Restraint in these situations is not my strong suit, especially not on my birthday. 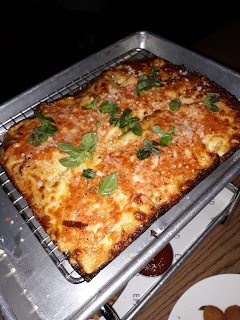 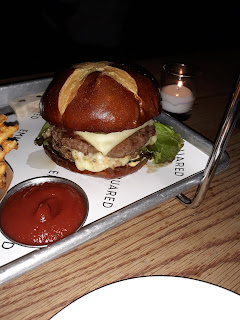 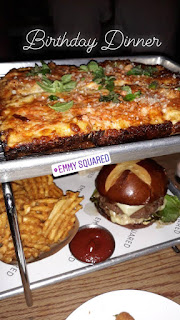 There were three of us so we decided next to share the vodka pizza (topped with mozzarella and pecorino cheeses, house made vodka sauce, and basil) along with a Le Big Matt burger.

The thing you need to know about both “Emily” and “Emmy Squared” is that while they are primarily pizza joints they do offer some other delicious options.

Secondary only to the pizza, are in fact the burgers.

In both locations the burgers are: a double cheeseburger composed of two, three ounce grass-fed New York-raised beef patties on a pretzel bun, topped with American cheese, bread and butter pickles, and spicy Sammy sauce.

If that doesn’t entice you they check out the photos of this bad boy on Instagram. That is all it took to convince me I had to try a least of piece of one.

The pizza was so good but different than other versions of this pie I have tried. It has a richness and wasn’t overtly salty. Dare I say it was even a tad creamy. I took the few slices we couldn’t finish home and not even two hours past before I needed to dig in once again.

The burger, however, nearly stole the show!

I am not a burger person but this one was just something special. Apparently it is akin to an In-N-Out burger, but I have never had one. If it really is then I am bummed I never had one when I had chance in L.A. or Phoenix.

The flavors and quality of the meat are unlike anything I have ever had. I actually left wishing I had a whole one to myself. Next time definitely. Aside from the great taste, the fact that is has a French name didn’t hurt its chances with me either (I am a Parisian on in the inside).

While I enjoyed my birthday meal here immensely, “Emmy Squared” is not the only Detroit style pizza I have tried in New York City. “Adrienne’s Pizza Bar” (https://bit.ly/2DByWCn) is located in downtown Manhattan and is a place I have frequented many times over the years. It remains a place I can go for a constantly delicious pizza, naturally on a Friday.

But the search for good pizza is an ongoing plight. When it comes to Detroit style pizza there is a new kid in town. “Lions & Tigers & Squares” opened last year and I have heard such rave reviews. The news has been so positive I feel like it will likely appear on my upcoming annual to do list which I will unveil in March.

Undoubtedly, I will be adding “Emily” to this year’s to do list as well, as I am a now a full blown fan of the Hyland brand.