For a Heavenly Slice of Pizza During Lent: “Victoria Pizzeria” 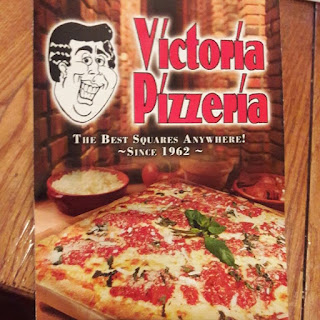 I am a whore for pizza. That is the brutally honest truth. Pizza does for me what is does for most people who enjoy it; it makes me happy. Happy no matter my mood or even if it is the best I have ever had. Pizza is the perfect combination of salt, carbs, and cheese - the greatest substance on planet Earth.

I crave pizza on a pretty regular basis and in a pinch I will settle for the version made on English Muffins. With a little minced garlic it can provide me with a decent fix.

As a salt fiend there are two foods I cannot avoid when in my presence. The first is of course pizza. The second are any type of flavored potato chips.

Thus there are always going to be numerous pizzerias on my annual to do list (http://bit.ly/2s4Ydji) and I am going to continue to see new ones out. Then there are times when they seek me out. That is the part I enjoy the most.

Just a few days ago a place in my neighborhood was pointed out to me by a local newspaper, the Brooklyn Graphic. They did a piece on a restaurant that dates back to 1962; Victoria Pizzeria.

I asked myself “how could there be a fifty-six year old restaurant not ten minutes from my house that I have never heard of?” Let alone a pizzeria? It made me take a long pause.

I read the article and its focus wasn’t on the history of Victoria Pizzeria but rather why it is so popular this time of year. The answer was Lent. Lent takes place during the forty days and nights that precede Easter. It is a time of year when strict Catholics do not eat meat on Fridays. Some even avoid meat for the entire duration of this holiday season. Therefore pizza becomes a very large part of their diet.

While I am a Catholic I am not one that necessary follows the rules so stringently. I am not a huge meat eater in general so eating it on a Friday during Lent doesn’t bother me. Make of that what you will.

The connection between Lent and Victoria Pizzeria came be summed up in two words: shrimp pizza.

Victoria Pizzeria is in a part of Brooklyn, Gerritsen Beach, that is a predominantly Catholic area. Last year they decided to incorporate some Lent friendly items to their menu. Putting seafood on their pizzas became a best selling idea.

Since I read about it I wanted to try it, naturally.

Finding the location was the hardest part. The block isn’t well lit and the sign out front also remains in the dark. The best way to find it, is to note the bar it is next door, The Gather Inn. That is bad boy looks like it could be on Broadway with its spotlight.
The interior is very tiny with only a handful of seats. I recommend getting a pie to go. 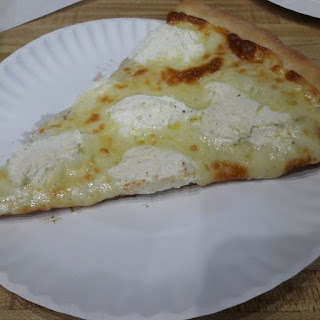 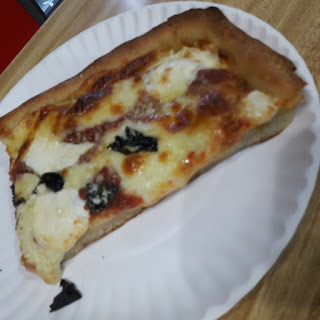 As I was starving beyond belief that day I sat down for a slice while waiting for my shrimp pizza to be ready. It only took about ten minutes.

The white slice I tried was tasty, but about average for those I have had in the past. My mother really liked the Sicilian slice she had and she is always hesitate about trying new marinara sauces.

When our shrimp pizza was ready we hit the bricks.

Shrimp is one of those foods that I am hesitate about trying. The consistency and way its cooked can make or break fish for me all together. 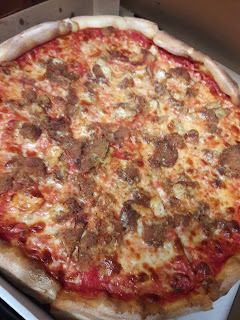 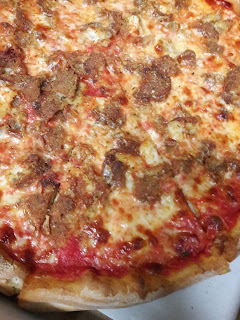 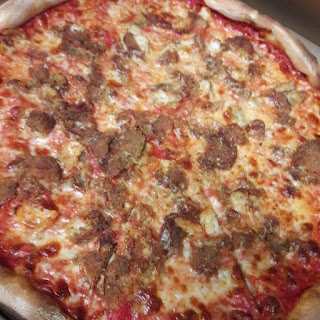 However the shrimp on the pizza is fried and chopped up into small pieces. That very much appealed to me. So did the taste. It was like a light version of shrimp parmesan, or at least it had all of the same ingredients. I liked the crunch of the fried shrimp on the top of the delicious, classic slice. I could have one of those every day.

For those interested in trying all of the specials Victoria Pizzeria is currently selling you have until April 1st, Easter, to try them out. They come out but once a year.

For all other non-Lent observers you can still order your pizza and entrees like its any other day of the year.