For Find Out Friday - Egg Creams Contain Neither Eggs Nor Cream….Discuss 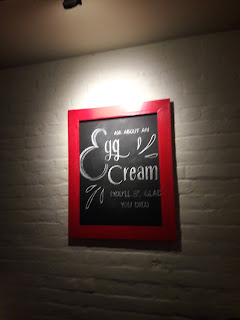 This week’s Find Out Friday was inspired by TNT’s limited series “The Alienist”.

In this week’s episode there was a scene where a young boy was drinking an egg cream and the man sitting next to him pointed out that the fact that his drink had neither eggs nor cream in it. The young boy thinks he has been cheated until the man explains that it is simply what it is called, but he didn’t know why. Well, neither did I.

As a Brooklynite, egg creams are part of my heritage. They are symbols of a bygone generation that still elicits excitement and bursts of joy when they are spotted on a menu. 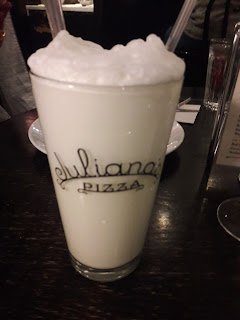 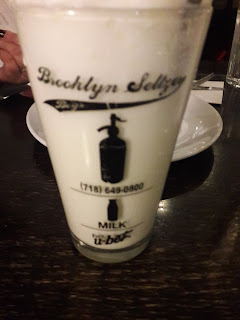 Such was the occasion when I stopped by Patsy Grimaldi’s latest restaurant, Julianna’s (http://bit.ly/2hWeC61). My mother was almost as excited to order a vanilla egg cream there as she was when we met Mr. Grimaldi himself.

For all of the nostalgia egg creams seem to bring up for generations before mine, I don’t really get the craze. It is a drink that consists of seltzer, flavored Fox’s U-Bet syrup (if you know what’s what), and milk. Apparently I had to be there.

As for the taste, they are okay. The combination of ingredients are sort of random and I know that the chocolate is the most popular, as with most treats. I have only sipped the vanilla but I have a palate aversion to anything chocolate that isn’t in the form of a white Kit Kat bar.

The most popular place to get an original Brooklyn egg cream these days is the relatively new (they opened in 2010) but old style Brooklyn Farmacy and Soda Fountain. Aside from serving these classics drinks and other goodies from the past, I go because they are a great source of Peter Pan Donuts (http://bit.ly/2rfucts). Aside from Doughnut Plant these are my ultimate favorite.

In the video below you can see a “soda jerk” making an authentic egg cream:

With all this talk about egg creams we need to get back to our original question. Where does the name come from? For that information we need to start at the very beginning of the story.

Louis Auster owned a candy store in NYC during the 1900’s and was the creator of this drink. The egg cream dates back to around 1890 - 1900. Auster and his family were the only ones who knew the secret recipe especially since those original ones had homemade syrup not Fox’s U-Bet in them. They were made in batches in the basement of the candy store and brought up as customers ordered them.

According to Stanley Auster, the inventor’s grandson, who was the last living member of the family to hold the secret recipe, that no one, not even he knows the real story behind the name. Stanley was given the family recipe when he was thirteen.

The two most likely reasons are that grade “A” milk was used in the recipe and it sounded like “egg” to immigrants with heavy accents.

Another is that the Yiddish word echt (real) was misspoken and pronounced as egg. Plus the drink tasted like cream.

The egg cream is a part of NYC and Jewish culture, something the immigrants who came to this country brought along with them.

But I don’t know if I like either explanation.

I have also read that perhaps eggs were apart of the original syrup recipe or that the head of the drink resembles egg whites. But I think everyone is just grabbing at straws.

No matter what the real reason is behind the egg cream’s name, it has had a lasting effect on anyone who has every come in contact with it.

Interviewed in 1989 by The New York Times, Stanley Auster said this about his ancestor’s recipe:

“I knew there was no egg in it and no cream in it, yet it was called an egg cream and everybody loved it. Well, the egg. The egg is the seed. From this life emanates. And the cream is that which gives life to the egg. I had this whole theory—this was the secret of life. People didn’t realize what they were asking for when they asked for an egg cream.”

For any of you who are now craving a traditional egg cream please be aware Fox’s U-Bet syrup is still readily available online in places like Amazon, Target, and ShopRite.

Bottled versions of egg creams are sold in many places but no self respecting Brookynite would ever be caught dead drinking one.