For the Star of a Bar That is “McGee’s Pub” 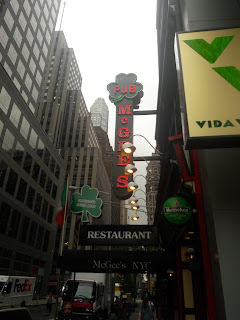 There is a certain serendipity in the air as I begin to write this. The television show I am about to reference has just come on. Finally! There is a perk to being an insomniac and a writer. I was being to think that wasn't possible.

The show is one that has been off the air for some time now but just like “The Big Bang Theory” and “The New Adventures of Old Christine” I have become entranced by it during the numerous reruns I have caught. I guess being an insomniac has two perks.

The show I am referring to is: “How I Met Your Mother” (HIMYM). There I said it. Now that the cat is out of the bag (a saying I am going to have to research one of these Find Out Fridays) I can focus on what I really want to talk about; McGee’s Pub.

McGee’s Pub is a place I wish I had known about along time ago and since I’ve gone I wish it was my corner bar.

I had an event at Feinstein’s 54 Below and I was looking for a place to grab a bite before hand. A quick search on Google maps showed me that McGee’s was around the corner. When I looked it up I found out about the connection with “How I Met Your Mother” and I was intrigued. I had to known more. Thus a visit ensued.

Walking in the pub vibe is evident. But it is not the “old man” or dive bar many pubs become. Rather this pub is spotless and does not reek of booze. The menu is enormous and the staff were delightfully friendly. My waitress also had an Irish accent which added to her charm. P.S. So did the GM who was kind enough to tell me the story of which I am about to share. Thanks Frank! 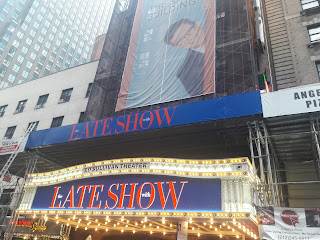 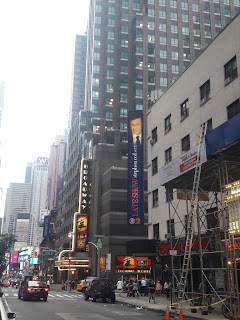 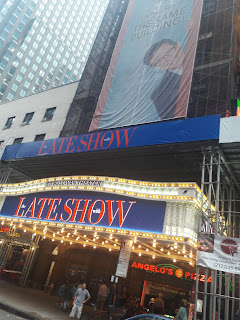 McGee’s Pub has been in existence since the 1960s but has only been in its current location since 1995. Prior to that it was located in the Ed Sullivan Theater where Angelo’s Pizza now resides. The Ed Sullivan Theater is the home of “Late Show”, both with past host David Letterman and current host Stephen Colbert. Side note: I saw the 2010 Broadway production of “Promises, Promises” in the theater there when Sean Hayes and Kristin Chenoweth were in it.

Because of the proximity and its awesomeness many writers and producers who worked for CBS used to drink at McGees’s. But in 1995 the original bar space became designated for a high end restaurant that has not yet panned out (see Angelo’s Pizza reference) and McGee’s moved over to West Fifty-Fifth Street where they were able to purchase a building and expand their bar to a three story facility. The top level is available for private parties and events.

No matter the short walk, those loyal fans of McGee’s followed and those producers eventually used their favorite bar to inspire the fictional bar, McLaren’s Pub, which was a centric destination in HIMYM. The show premiered in 2005 and went off the air in 2014. The premise of the show too was inspired by their lives and friendships. If you are wondering like I did why the bar is called McLaren’s, it is a result of combining of the producer’s last names. 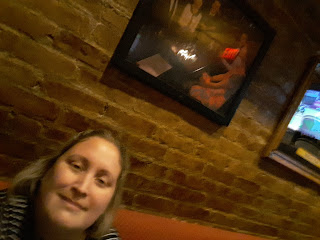 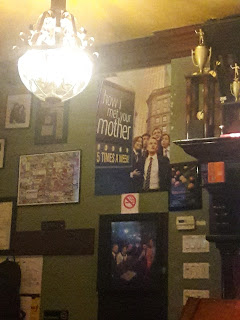 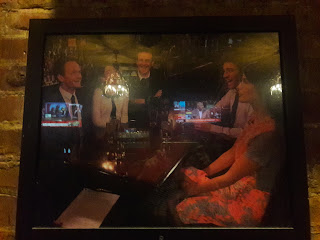 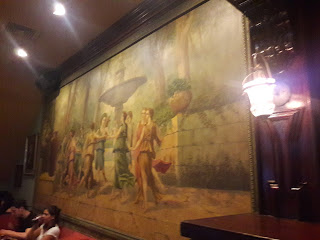 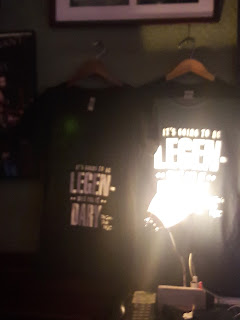 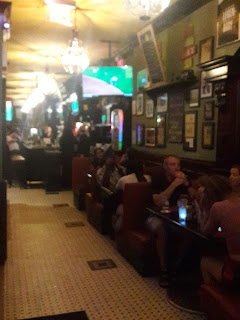 Ever since the show debuted fans have come by McGee’s to see the show memorabilia and feel just that much closer to the characters. It reminds me a great deal of when I visited “Cheers” in Boston which had originally been called “Bull and Finch Pub”. Just like on the show of the same name, it too had inspired television success. That bar is another great place to sit, eat, drink, and take a picture with a cardboard Norm. Perhaps McGee’s needs to set-up some cardboard cutouts of HIMYM stars for Instagram worthy photos. 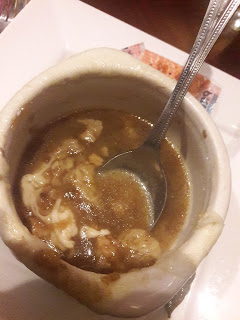 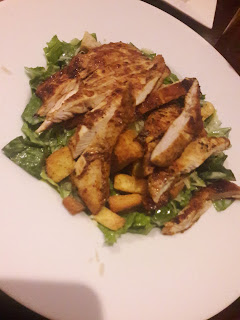 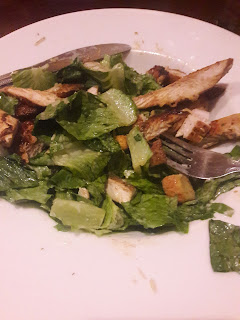 Unfortunately I couldn't partake in any alcoholic festivities but I did manage to have a late lunch while here. I ordered the onion soup and chicken Caesar salad. Both were good but not my favorite versions of either that I have ever had. Next time I am taking the train (so I can have a pint) and ordering the burger and fries. I feel this will be a much more satisfying and traditional pub experience.

Aside from a slight difference in the layout, you can see the similar details of both bars. The dark wood, the way the bar is long and has many stools with high backs, the booths in the front (which are in front of the actual bar in McGee’s version), as well as the mural in the back are all aspects fans will recognize instantly from the show. I am told that the producers still come in time to time to have a drink. No word on whether or not they choose from the menu sparked from their creation. 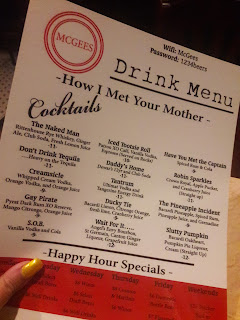 Besides the cool beverage and food items on the menu that use references from the show, which change every six months, McGee’s partners with On Location Tours to provide an all around experience. The tour meets up right in front of the bar and customers can stop in for lunch before or after and receive a fifteen percent discount on their meal. For fans it is the total package.

So for you HIMYM viewers out there, or for anyone looking for a chill place to hang out in NYC, McGee’s Pub will be right there waiting for you.

I guarantee it will be:

“legen— wait for it-- and I hope you're not lactose intolerant, because the second half of the word is-- dary! Legendary!”