For Find Out Friday Week 43 - Who Was the Man Behind the Maryland’s Most Infamous Hospital?

August 04, 2017
"In the death of Johns Hopkins a career has been closed which affords a rare example of successful energy in individual accumulations, and of practical beneficence in devoting the gains thus acquired to the public."

There are only a handful of medical institutions in this country that have the prestige of Johns Hopkins Hospital and University in Maryland.

Luckily for me I have never had to have an intimate knowledge of this medical institution other than the handful of facts I have heard about it. In fact the most I have read about it came from a book I love; “The Immortal Life of Henrietta Lacks” which has shaped my life in more ways than one (http://bit.ly/2v25HEq). If you have not read it I urge you to place you order on Amazon immediately, especially all of you Prime members out there.

Upon my rereading of this book last week I learned a handful of facts (as seen in the photos below) about the man whose name can be seen on a hospital, university, school of medicine (among others), and press publications. I was so intrigued the only way I could refocus on my reading was to promise myself that I would look further into the matter as soon as possible. 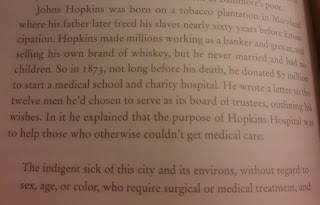 Johns Hopkins was born to a Quaker family on a farm known as White Hall in Crofton, Maryland on May 19, 1795. The fact that the name John has an “s” at the end is unusual and is derived from one of his ancestor’s last name.

Johns Hopkins wore many hats during his life but began as a farmer and eventually opened a very successful grocery business with his brothers called Hopkins Brothers and Wholesalers in 1819. While the business did well this is not how this Hopkins made his wealth. During his life he had invested money in many places but the one that made him the most money came from his financing of the Baltimore and Ohio Railroad. He was so successful in life that he was able to retire at the age of fifty-two in 1847.

Since his will was drafted in 1870 it is largely believed that the Civil War and the yellow fever epidemic that followed, which devastated Maryland greatly, influenced Johns Hopkins to share his wealth with a foundation for medical improvements. He was known to have said many times throughout his life that he had no intentions of taking his money with him, so to speak. He never married or had children but in using his money this way his life has lived on.

The instructional letters he left alongside his will dictated his mission for the hospital. It was his desire that care was provided to those who needed it regardless of race, age, gender, or religion. He also explicitly stated that those who could not afford treatment would not have to pay. I double checked to see if in fact that was true and gladly it is. It is called charity eligible which reflects language not of this century but that aside I am proud to know it remains in place. It is like another hospital I support greatly, St. Jude Children’s Hospital (http://bit.ly/2v4Hr2S), which does not take money from any family.

Johns Hopkins also detailed how many aspects of the university were to be laid out including that its School of Nursing was to be established with the aid of someone you might have heard of: Florence Nightingale. I think that is just a cool fact.

To say his dream was well thought out is an understatement.

In the one hundred and twenty-eight years since Johns Hopkins Medicine has been open for business, it has been named the number one hospital by U.S. News and World Report numerous times.

With an institution of this size there are countless facts and figures such as the following:

Just as important as the treatments and care they provide everyday are the discoveries that occurred at Johns Hopkins Hospital that have influenced the medical world as a whole.

Here are my favorites:

Politics, racial equality, and societal progression aside, Johns Hopkins Hospital and University (specifically the School of Medicine and Nursing) has done more for the world than can be quantified in this blog. This is merely a blimp on the radar. I wonder what Johns Hopkins himself would think of the wonders he put into motion.

I have always had a desire to visit Johns Hopkins Hospital - as a visitor ONLY. I long to see the marvelous Jesus statute that remains in their lobby and say a prayer as I rub his feet as so many others have who have entered those doors.

I would love to see the magnificent building and stand in the halls that been apart of so many medical miracles and research that has saved thousands of lives. I am currently looking into finding out if they have any museum of historic materials about their history preserved that are available for the average visitor.

The White Hall Estate, the birthplace of Johns Hopkins himself, was to be demolished but in hopes of turning the home into a museum, restaurant, and inn, there is now a campaign on Kickstarter. Should that persevere I plan on being on a tour someday. However, had Johns Hopkins had his way, his former home would have been the sight of his hospital and university. I hope that these eighteen hundred acres of land that helped produce this man are able to be preserved as another place where we can go to learn his legacy of education and generosity.

A final stop on this hypothetical trip to Maryland will be the Green Mountain Cemetery. It is where Johns Hopkins is buried as well as other notables like John Wilkes Booth and Napoleon Bonaparte’s sister-in-law. It was also to be the burial site of the Duke (who had abdicate the throne to marry her) and Duchess of Windsor until an agreement was made with the Queen to allow them to be buried alongside the royal family.

Hopefully this trip will become a reality someday soon and you will no longer have to wonder when you see the blog that will surely follow.

The seven million dollar endowment Johns Hopkins left behind is the largest philanthropic donation for education in history. His generous legacy and the life saving work the institutions he created have done for the world should make him a household name. I know after you read this it will be.