For Find Out Friday - Week 45 Why Does a Paper Cut Hurt As Much As Getting Your Arm Amputated? 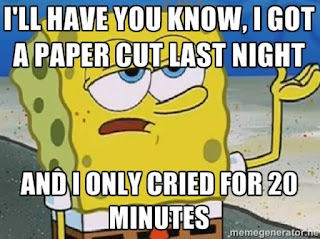 One of the worst things that can happen to you on any given day is getting a paper cut. Usually it happens quickly, seemingly out of no where and once you have it you instantly regret it. You criticize yourself for not being more careful. You fold your finger in place, do a lot of swearing (if you are me), and do your best not to get soap on that spot when you wash your hands. I have no idea how many I have had in my lifetime. The tally is probably at most in the double digits but I remember the agony of each and every one. I am still pissed about them.

Paper cuts are one of the few experiences that are truly universal. When you see someone else get one you can feel their pain while simultaneously thanking God that it didn’t happen to you………until it does again.

I am convinced getting your arm amputated is less painful. For one thing there are pain killers and secondly you most likely know its coming ahead of time.

Of course I am being dramatic.

So what is it about these fuckers that make getting one suck so bad?

You are about to find out.

Our fingers and hands are the body parts we use the most. Think of all of the things you do from the moment you wake up until you get to work. Now imagine if each one of those actions gave you a shred of pain. Well, it would certainly suck, although you would live.

Paper cuts affect the most sensitive and most utilized parts of our body. Once you have one, clean it, and bandage it, there really isn't anything you can do until it heals. Healing however, is delayed by how often during the day you are using and thus aggravating the affected area. The laws of human nature also seem to make us re-injure the area we are trying our best to avoid.

Despite the small cut we see on the outside, a paper cut is actually not a smooth line. It has depth and many small ridges. They also have a tendency not to bleed very much. That is actually part of the problem. Without bleeding and the subsequent clotting, the nerve endings that compromise our fingers and hands are exposed to the open air. That causes the terrible, stinging pain that we recognize and results in the afore-mentioned swearing. 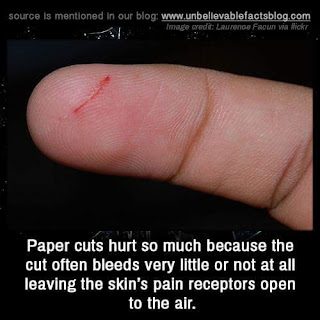 While reading about our nervous system and those pesky little buggers causing us terrible pain over such a small wound I remembered an illness I long ago heard about where people wish they could feel pain; of any kind. I am dead serious. Very literally.

Pain seems like a form of punishment when we enduring it but it is actually the opposite. Pain is our body's way of telling us something is wrong. Pain is also the way we find out what behaviors we do not wish to repeat. When a mother cautions her young child not to touch the stove because its hot, the only reason the child obeys is because they know what hot means and it is a sensation that will hurt.

But what if you couldn't feel heat? Or pain?

How do you explain to someone what is in their best interest who has no idea the horrific consequences that lie ahead if they do not heed your warning? For parents of children born with CIPA that is exactly what they deal with on a daily basis.

CIPA stands for Congenital Insensitivity to Pain with Anhidrosis and is more often than not a death sentence. A child who lives past the age of four is seen as a miracle. The diagnosis is typically made at birth or shortly there after when the family realizes something is wrong with the baby and he or she is not seemingly affected. CIPA is caused by a gene mutation that derailed the appropriate function of one’s nerves.

The twenty-four hour problem becomes making sure the child does not accidentally self insure themselves resulting in their own death. Hands are often bandaged, eyes are protected with goggles, etc. All precautions are taken, because broken bones can be walked on, burns can led to septic infections, and not feeling temperature leads to seizures because their were no symptoms signaling a reason to treat.

Around one hundred people a year are born with this unusual but deadly condition.

So the next time you inevitably get a cut from paper and think why me, stop and realize the pain you are feeling is what is keeping you alive.

I bet that changes your perspective a bit.