For Find Out Friday - Week 44 Who Was Tom and Why Does That S.O.B Have His Own River? 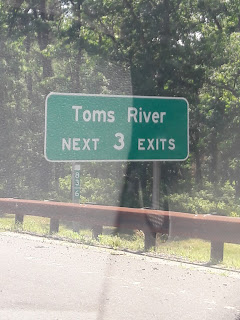 What does one have to do to get a river named after oneself? That’s what I wonder every single time the town of Toms River in New Jersey is mentioned. My family has life long friends who live there and that is really all I know about it. Oh that and that it takes about a day and a half to drive there from my home in Brooklyn. Okay maybe it doesn't take quite that long but that is how long it feels especially once you hit the inevitable traffic jam in Staten Island.

So if you are making the trek out there it is important to know why.

Why Tom? Why is it his river?

What is remarkable is that everyone I asked, even those who live in his town, seemed to have no idea.  The most descriptive answer I got was “something historical”. I hope to provide you with a bit more detail.

Toms River is all the way out there in NJ. It is at about an hour past Atlantic City near Seaside Heights and the Jersey Shore. Toms River is the name of both the township as well as the river. Toms River is listed on both the state and national registers of historic places.

The river was originally called Goose Greek, while the township was previously known as Dover which was one of the founding townships created by the New Jersey Legislature in an Act of 1798. It wasn't until 2006 that it was officially changed to Tom’s River Township.

There appears to be three men for whom the town was renamed during the 1800s. The first is Thomas Luker who was a farmer and ferry operator who worked back and forth on the Goose Greek River during the 1600s. The second is an English Captain and assumed pirate William Toms. There is even a possibility it was a Native American named Tom.

However in 1992 it seems everyone came to a consensus and decided it was Thomas Luker who was the real Slim Shady, if you will. Since Tom Luker brought the whaling, fishing, and boating industry here it is only logical that the river he worked on was named for him.

Toms River was an essential location during the Revolutionary War as it was home to salt works for the colonial militias. In 1782 the British attacked the colonial militia and destroyed the salt works. Captain Joshua Huddy was captured by loyalists and hung. Much of the village had been destroyed. These events delayed the progress of the peace treaty that was being negotiated for another year.

While all of this information was enlightening, I got more than I bargained for. It turns out that when you go poking around for information you need to be prepared for what you find. Though I was innocently searching for the answer behind a name, I ended up finding a whole lot more and it wasn’t exactly positive.

Despite the fact that Tom’s River has continually been named one of the safest places in the United States to live, that is not to say they are without their problems.

During my research I stumbled upon a pretty appalling tidbit: Toms River is home to a Superfund site that was designated in 1983. For those who do not know what a Superfund site is, it is a location where the Federal government has designated the region as harmful due to extensive levels of pollution and contamination that desires a long term clean up plan. The Environmental Protection Agency (EPA) has a list of such locations that make up the National Priorities List (NPL).

In a more shocking turn of events New Jersey ranked number one out of all states on the NPL, meaning they have the most Superfund sites! A total of one hundred and sixteen!!!! Wow.

To be listed as a Superfund site that means the contamination is in the air, water, ground water table, soil, and so forth. It is pretty serious.

Apparently the cause of the contamination was the Toms River Chemical Plant that was operational from 1952 until 1996. When health officials began noticing the stark increase of childhood cancer rates during 1975 and 1995 many began to take notice.

The investigation discovered that the chemical plant had been dumping toxic chemicals into an underground plume. Toms River was labeled as a Superfund site in 1983 and in 1984 the discharge pipe was shut down after a sinkhole leak was found.

As of 1996, after much stringent water testing, the water was said to be safe once again for consumption. The rates of cancer are said to be back down in line with “national averages”.

As I read and pieced each piece of the puzzle together, the more questions I seemed to have. None of which had to do with my original question. It was a lot to process as this was all news to me.

Writing this blog makes me feel like Erin Brockovich. Stories like that are now bouncing around my head. I feel like I should be warning everyone to move out of New Jersey. But of course I am the one who has always insisted that the only good thing to come out of New Jersey was Bon Jovi, yet he and his family remain living there.

I am beginning to think that whoever the Tom was behind Toms River might have died from this. Of course that is purely speculation. Or as Bill Maher would say; “ I don’t know it for a fact, I just know its true”.

In the May 2013 New Yorker article, “ A Town Plagued by Water”, Alexander Nazaryan wrote:

“And eventually people will forget Sandy, as some in Toms River have already forgotten cancer.”

But I am unlikely to be one of them.