For Loving Life with Levi Kreis: “Broadway at the Keys Tour” 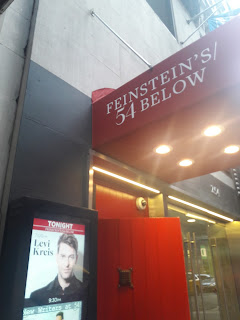 Hallelujah! I love him so.

Even though it has been more than two years since I have last seen Levi Kreis perform live, I still knew it would be an experience I could not pass up when the opportunity presented itself once again. Such was my luck as he was promoting his latest album, “Broadway at the Keys”, and would be playing at Feinstein’s 54 Below in NYC.

Feinstein’s 54 Below (formerly 54 Below) is a cabaret nightclub created by Broadway producers, that lives below the legendary Studio 54, which now operates as a theater. In 2015 Michael Feinstein became involved and the club now also bears his name. 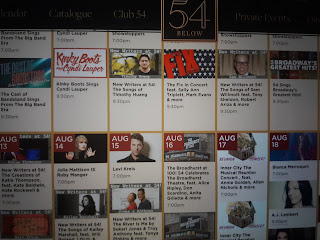 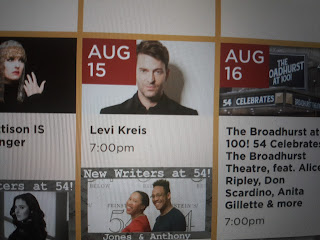 Feinstein’s has been open over five years now and is where the locals go to hear the local Broadway talent sing their hearts out. The nightclub also boasts a full menu including desserts and cocktails. Those who purchase tickets should know there is also a twenty-five dollar drink and/or food minimum per person upon showtime. 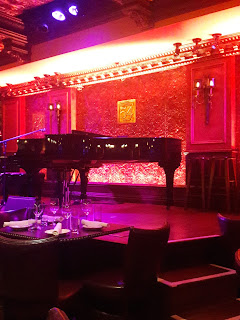 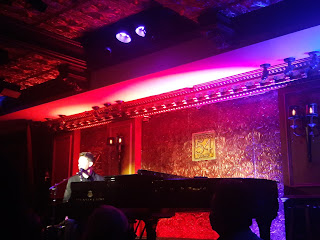 The venue has only one hundred thirty-four seats and at most is twenty-four feet away from the stage. It is that kind of proximity to the stars that keeps us all coming back again and again. The club is reminiscent of old school Hollywood. It is red and gold all over. The waiters are in formal long aprons with pinstripes on them. Once you step inside it is like stepping into an old film but with all of your favorite modern performers playing.

There really isn't anything quite like the feeling I get being in a room where live music is being played. It is part of the reason I love going to the theater so much. When the music begins to swell in a completely silent room, you can feel the passion and emotions of the lyrics and of those singing in your bones. It gives me the chills. I choke up even if it’s a song I know by heart. Hearing it live just brings a whole new force behind it. No one artist I know expresses this more than the man I was here to hear, Mr. Levi Kreis. 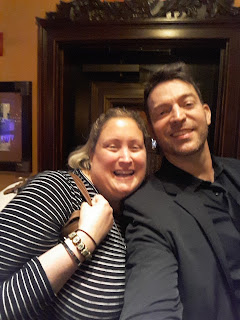 Levi Kreis and I go waaaaay back.

All the way back, in fact to the Nederlander Theater in 2011 when a hit Broadway show called “Million Dollar Quartet” (MDQ) changed both our lives and bonded us together forever.

Levi originated the role of Jerry Lee Lewis in MDQ and seeing the talented actors and singers in that show and getting to meet them that made me realize I too needed to live the life I imagined. I needed to pursue my dream and work towards leaving the day job I had then and hated. The year 2011 signifies for me the sight of successful people living their dream and moved me to take my first step towards doing the same via creating my blog. I will never be able to thank them enough for inspiring me, whether they know it or not.

Ever since I met Levi and began listening to his music I have been captivated by it all (http://bit.ly/2vIqAou). In fact he was the reason behind my first visit to 54 Below (http://bit.ly/2uVtsvj) in 2012. So it is no surprise that he has brought me back here once again.

While Levi and I could not be any different, he is a good ole boy from Tennessee and I am an abrasive New Yorker, I love listening to the stories of his life and the music that has come from it. I feel like he has lived many more lives than me, even though we are the same age. He has a wisdom in his soulful voice that I find addictive and comforting. His performance at the show this week was just as powerful as ever.

In a moment of surprise I ran into another MDQ alum, Eddie Clendening, who originated the role of Elvis Presley on Broadway. He performs his own music with his band, The Blue Ribbon Boys, and I hope to catch their show sometime in the future. I just had to say hello because I could not believe both of this talented men where once again in the same room with me.

The biggest compliment I can pay my friend, Levi Kreis, is that as soon as our meeting was over the only thing I want to do is write. It appears he is my muse, especially when I need him the most.

Please check out his website listed below to let a little bit of his magic enter your world. You will thank me, I am sure of it.