For the Love of a Perfect Chip: “Lay’s Do Us a Flavor” 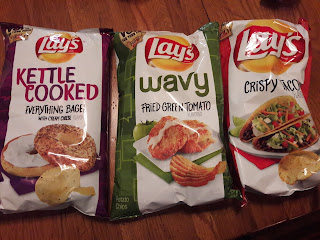 I do not care for plain potato chips. Sure a few will slip past my lips if they are in front of me but I will not be overly enjoying it. However hit me up with a sour cream and onion or something smothered in ranch and you will have my full attention.

Lay’s Do Us a Flavor is another way of getting my full attention. This is my third time participating in their request and I think perhaps the most delicious. For instance I have actually had all of these foods in my everyday life so I know exactly how they should taste.

The first time I did a flavor for Lay’s it was choosing between two kinds of barbecue and two variations of cheese and sour cream (http://bit.ly/2vPTgfL). The second contest I participated in, which took place last year, was to solve the debate of which ethnic food related chip took the cake, so to speak (http://bit.ly/2vGNmOp). 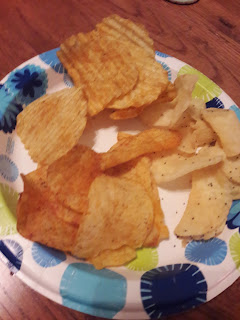 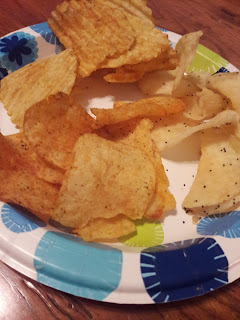 This year’s challenge is between these three finalists: Kettle Cooked Everything Bagel with Cream Cheese, Wavy Fried Green Tomato, and Crispy Taco.

Before I begin my review I have to say that I don't understand why when comparing chips they aren't all the same kind? I mean why is one Wavy, one Kettle Cooked, and one a standard chip? If we are really to do a fair comparison they should all be the same, otherwise the way a flavor clings to a shape, or feels after being Kettle Cooked, isn't something that can be accurately debated. But that is for another time. 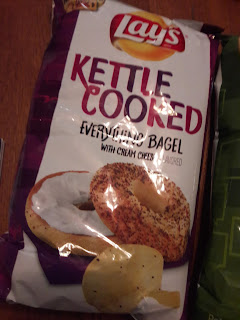 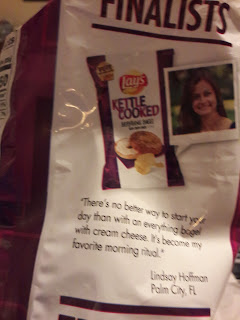 I tried the Everything Bagel with Cream Cheese first. I do not love Kettle Cooked chips and would not ordinarily choose them but I love an everything bagel especially with cream cheese so I thought these would be my favorite.

After tasting several to make sure my decision was final, I decided that while good they mostly tasted like a poppy seed chip with a hint of cream cheesiness. The only decision I have left is to decide whether or not these are suitable as a breakfast food when on the go. 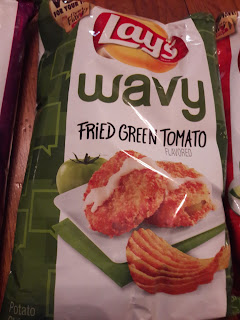 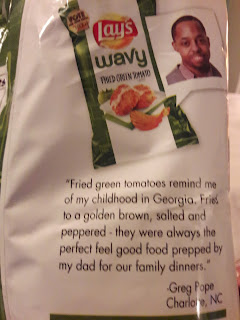 The chips, however were strange. They had me wavering (no pun intended) about whether or not I liked them. The first few I ate had literally no flavor. The next few were a toss between too much black pepper, a hint of green tomato, and mostly the tangy dressing that is served on the side when you place an order in the restaurant. Overall these were my least favorite. 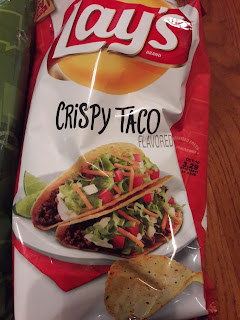 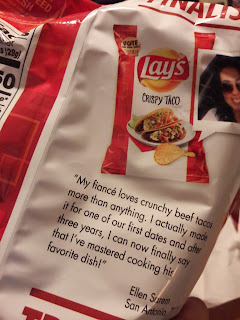 I saved the best and my most favorite for last: Crispy Taco. It tastes exactly like a taco and a damn good one at that. The natural crisp of the chip resembles the crunch you would get from biting into a taco. Next there is the full flavor of lettuce and tomato (even more so than the Fried Green Tomato). The beef flavor is very minimal, which I liked. It tastes like someone took a package of taco seasoning (garlic, onion, chili, salt, pepper, cumin), blended it with lettuce, tomato, and a piece or two of beef, and produced this chip.

I was shocked this was my favorite but each and every bite surprised me. If you had your eyes closed and were eating this chip the only glue that you weren't eating an actual taco was that there was less of a mess. The flavors are so sharp but not one of them was overwhelming the other. They all perfectly complimented each other. And this chip perfectly complimented me.

When it comes to elections our society protects our right to secrecy but a blog should afford no such protection. I don't see the point.

I used my vote wisely (even though these are Lay’s potato chips - get it - hahaha) and selected Crispy Taco as the winner. Whether or not that will be victorious in the end remains to be seen. The polls will be open until October 8th and the creator behind the winning flavor will win one million dollars.

Last year I was able to find these chips at any store I went to, even drug stores but this year it was a mission to get them. I finally had to order them online from Amazon. So if you want to try them and vote for a winner be sure to do your homework and see where they are available nearest to you.

Remember that you can cast your vote once a day, everyday, until October 8th, which also allows you the chance to win some cool prizes in the meantime. Simply register to vote (via Facebook) on the Lay’s Do Us a Flavor website.

While I was never any good in science class, I have grown to appreciate the wonders the subject has created in our lives.

First it found a way to transplant organs, now they have used it to make Crispy Taco chips that taste more like the real thing, than even the real thing does sometimes.

What will they do for us next?

Turns out Science has done Lay’s a Flavor too.