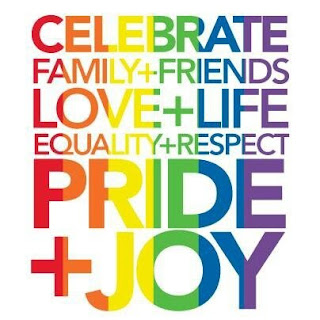 I firmly believe that if you don't whole heartedly love yourself there is no way you can really love anyone else. Without any self-love all there is, is hate. Hate for yourself, hate for others, and as we all know by now love trumps hate every single time.

Last year about this time I posted all about the pride we must have in ourselves (http://bit.ly/2ugsqJv) no matter who we are.

This year I decided I had to attend the NYC Pride March. I actually had wanted to attend before this but the dates never seem to work out. This year I made sure they did.

I began my morning by getting on the train and eating a vegan protein bar. This is the difference between being under or over thirty years old. Those under were probably already pregaming. 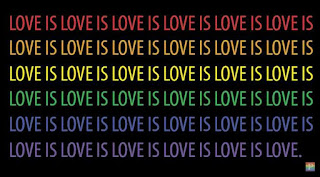 I got out at Union Station where I was surprised to see so many people out there getting their sales pitch hustle on; trying to sell as many rainbow flags, pins, practically anything with a rainbow on it that they could.

I walked down Fifth Avenue towards the Village which is pretty much the entire parade route. When I arrived at the corner of Gay and Christopher Streets I found a spot to stand in the shade. I was all set to go.

I wanted to be as close to the end of the route as possible because I wanted to be sure to pass by the gay rights monument that is the Stonewall Inn. Seeing that spot has been on my to do list (http://bit.ly/2s4Ydji) for some time. 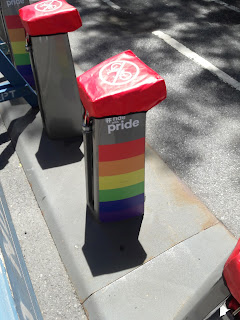 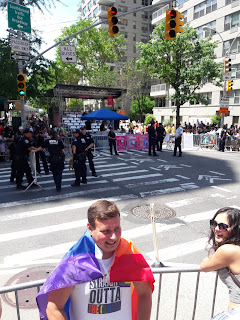 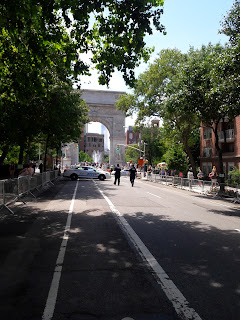 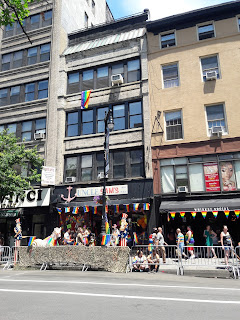 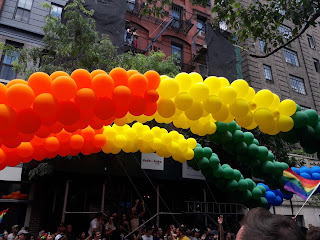 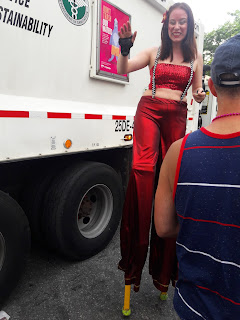 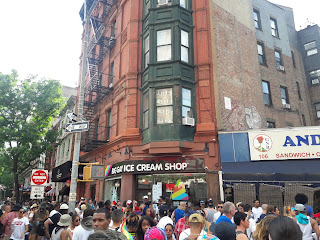 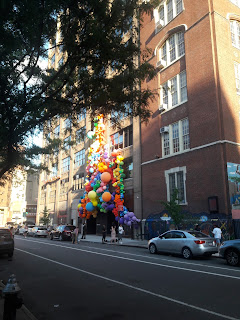 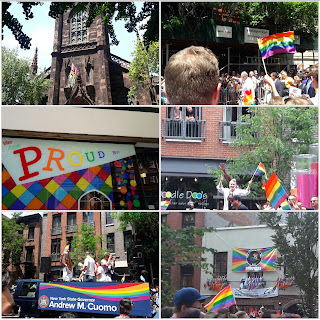 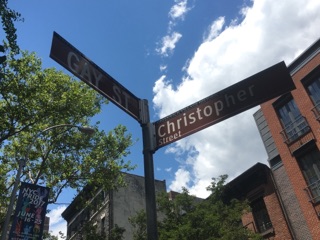 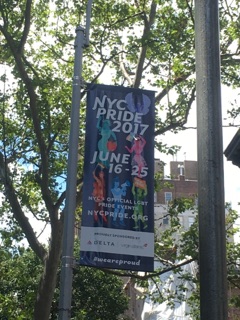 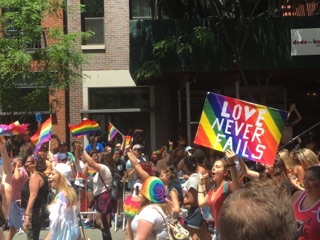 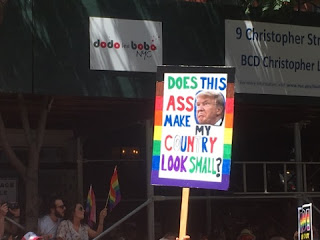 I actually got to pass by the bar later on in the day but not the way I wanted. Of course it was too packed on this particularly day to get close let alone inside so I have to still go back to have at least have one drink, otherwise I won’t be available to properly check it off my list. But that was not what Pride Day was all about, necessarily.

Since it is not in my nature to skip out on the history behind any particular event, here are the basics. The first ever Pride parade was held in NYC in 1970 to commemorate the Stonewall Inn riots that occurred the prior year. It has continued every year since then promoting the issues and names of those struggling and surviving the injustices the LGBTQ community has been forced to endure. 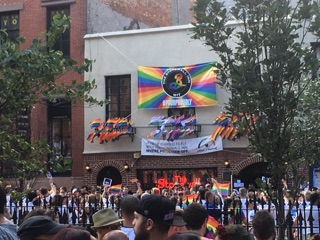 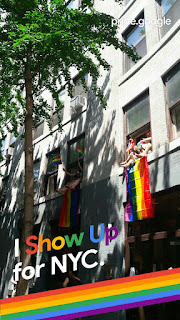 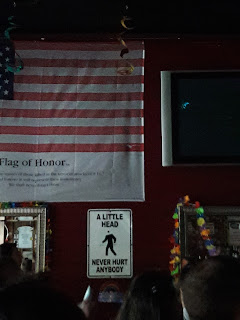 Apparently 2017 marks the first time in history that the NYC Pride March was being broadcast live on ABC7 from twelve to three p.m. I was none the wiser but it wouldn't have mattered since I was there. But it is still good to know that this parade is being treated with the same magnitude as the Thanksgiving Day Parade but clearly one is more important than the other.

The Rainbow Flag, which is such a big part of the LGBTQ community’s image originates from San Francisco. A former drag queen with a talent for sewing named Gilbert Baker, who was friends with the late Harvey Milk, worked on creating the iconic flag from 1976-1978. Harvey knew they needed a symbol where words were not needed and anyone in the world can identify with a flag.

“They are among the most immediate, primal, and communicative forms of design.”

The first rainbow flag made its debut on June 25th, 1978 at the United Nations Plaza in San Francisco. This flag now resides at the Museum of Modern Art in NYC, a source of great pride for me. I have a planned trip to MOMA this summer to see their current Frank Lloyd Wright exhibit. I will be sure to see this flag before I do anything else that day.

As for the parade (technically called a march) it was fun. It started pretty soon after I found my sweet spot and the energy was amazing. Everyone was in a great mood, sharing the love in the air, even brining out the politeness New Yorkers aren't necessarily known for. There wasn't any shoving or pushing like I have experienced at stage doors. Here everyone was just out to show, well their pride, and respect. It was a great feeling to be in the crowd.

There were of course those with the outlandish outfits including some people were purposeful missing portions of their outfits. I saw more naked breasts than I needed too. I feel like nudity or as close as that as you can see, doesn't really have anything to do with having pride in yourself. That seems more like an act to attract attention which rather misses the focal point of the days events. You can have fun and be creatively dressed without crossing a line, though I have see much worse on any given average day taking the subway.

The parade had long periods of pausing which I hear is not the norm but there were some big highlights. 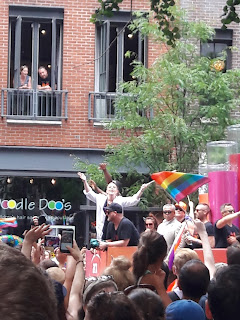 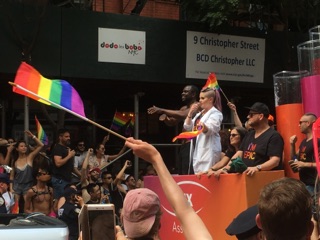 For starters towards the end there was Kelly Osbourne!! I have seen online that Kelly has since blamed Starbucks for wetting her pants after they refused to let her use the restroom. Starbucks has said that that location did not have one. Either way I totally sympathize and that crowd couldn't have been more excited to see her.

There were an assortment of groups that proceeded Ms. Osbourne individual in their own ways. I found the group that held up signs of trans victims of violence especially moving. There was the collection of signs depicting our current President and his cabinet members with some choice phrases over their mouths. There were those, like the myself and the gentleman behind me who saw that and replied with a chanting of Secretary Clinton’s name. Then there was the best sign of all!! It read: “Make America Great Britain Again”. Now that was pure genius. 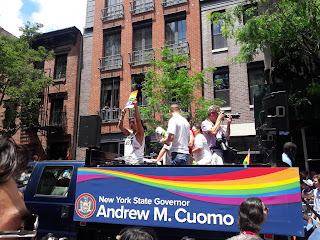 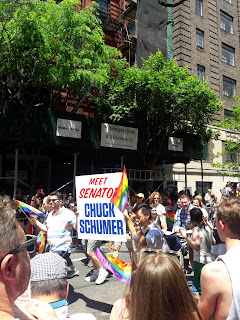 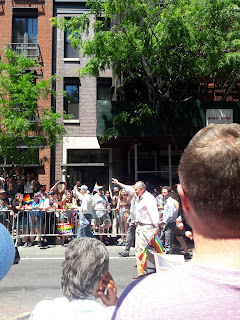 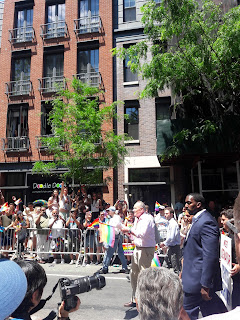 At around three I broke for a bite and a rest at the Waverly Restaurant around the corner which is a great local spot. Many others had the same thought.

From there I then had the strength to return to the festivities passing near the Stonewall Inn and then going for a drink at Barrow’s Pub. That was great fun. It was dark inside but relatively cool. It was packed but playing great music that reminded me of a college bar I used to go to.

But what took the cake was this man that worked there, who I could have sworn I saw on an episode of Dateline or surely will soon, holding up a flashlight on those brave enough to sing and dance on a table for their fifteen minutes of fame. Those folks were great fun to watch but I was so sure one of them was going to fall and break their neck. Luckily no-one did while I was there.

Across the street was a deli were I managed to satisfy my craving for fries. All and all for me is was a great day filled with pride, love, and happiness.

In other Governor Cuomo news, he also announced on Sunday that the plans for an LGBTQ monument are finally under way. It will be placed in the Hudson River in the Greenwich Village section of NYC. The artist is Anthony Goicolea and the monument will have nine boulders with pieces of borosilicate glass so that when the light hits it will create a series of rainbows. There is currently no estimated completion date but naturally that will be added to next my to do list.

Another thing on my schedule next year is to celebrate pride in another city. I am thinking maybe LA! See you all there.