For Brooklyn’s Own “Brennan and Carr” 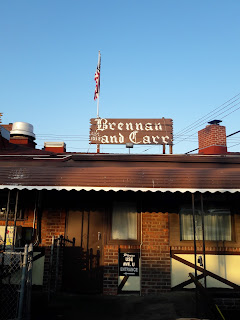 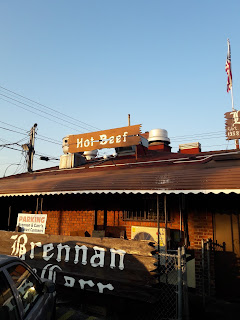 As a Brooklynite there are just some restaurants that I grew up near aware of how special they were to the outside world. One such place was Brennan and Carr.

Brennan and Carr has been around since 1938 opened by George Brennan and Edward Carr. Eddy Sullivan is the current proprietor and has been since the 1970s.

The restaurant’s a small wooden structure is its original location and continues to press on as though time has stood still. If not for the surrounding chaos of the busy Brooklyn streets you would think you stumbled upon a cabin in the woods in some type of fairytale.

The menu, though now offers a wider range of items like hot dogs and burgers but the signature meal remains roast beef. Whether you order yours on a dish or on a bun, the roast beef is Brennan and Carr’s delicacy.

In fact the only other order I had heard anything about was what’s known as the “Gargiulo’s burger”. But I had no idea the origin was so obvious.

As told to me via an article in The New York Times:

“But the last major addition food-wise came in the ’70s. Back then, the Russo brothers, who own Gargiulo’s Restaurant in Coney Island, would come over after closing, bringing their own Italian bread. They put the hot roast beef on top of a cheeseburger and dipped the whole thing in the broth. For years, the Gargiulo’s burger was sold only to those who knew about it. Mr. Sullivan finally put it up on the takeout board about five years ago, and added it to the placemat menus a year later when he ordered a new batch.”

I am a fan and long time patron of Gargiulo’s (http://bit.ly/2sfsA49) yet I had no idea about this connection. Apparently there really is six degrees from me and Kevin Bacon.

I have seen Brennan Carr mentioned countless times on the Food Network and Travel Channel but still was not really contemplating a visit until I saw an episode of “Man v. Food” a few years ago.

Here is what you missed:

After watching this video you can understand how Adam Richman, a fellow Brooklynite, convinced me I would have to try this renowned roast beef sandwich for myself at some point.

Well, that time had finally come.

A couple of weeks ago I was driving around, running errands in my neighborhood and got hungry. Starving actually. Dinner time had come and gone and I needed something to eat fast. I was bored to tears by my usual haunts and decided that it would be a good idea to finally hit up Brennan and Carr, if I could get a spot. Those of us in Brooklyn know parking can be an issue. We aren't spoiled enough to have a lot ready and waiting for us at all times. We have to earn it. I took it as a sign that the small parking lot behind Brennan and Carr had one spot just for me. Apparently this was fate. 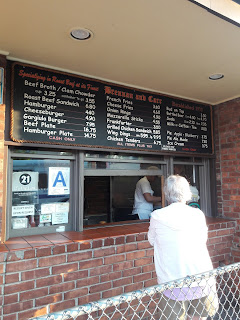 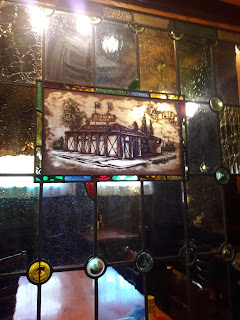 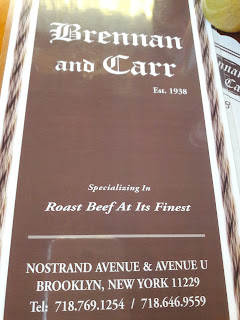 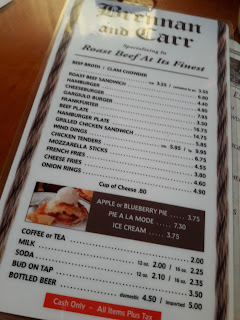 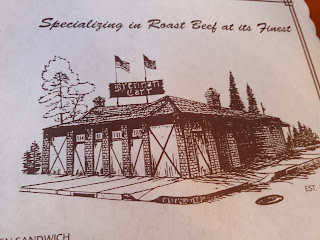 I walked to the back room where it was cooler and less crowded where I was greeted by one of the several young man wearing what looked to me like lab coats. You know the kind; the long, white, button down type you would see a pharmacist wearing? Perhaps I spend too much time at Walgreens. Anyway these high school age, polite young men (all wearing ties and business casual clothes under their lab coats) were quite friendly. One took the drink orders, one took our actual order, and one cleared away the (paper) dishes. It took a minute to notice these clearly defined roles. 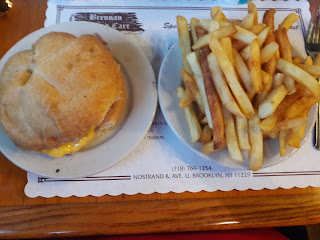 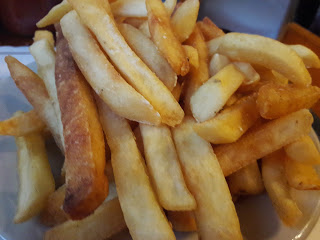 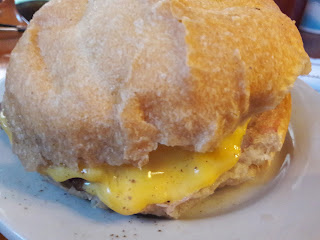 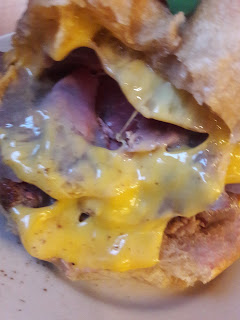 I went with the classic: a hot roast beef sandwich double dipped in their house made au jus. I also requested that my beef come medium well as I do not care to see any red on my meat, not because of the taste but simply because the appearance makes it less appetizing to me. I am a very picky meat eater and definitely do not usually have beef as my go to protein. But when in Brooklyn……

I also got an order of fries.

The food came right away and was pipping hot. This sandwich was a two hand job but looking back I should have just used a knife and fork. The meat did seem a little too rare in some spots but I was smart enough to cover those spots with fries which also added a nice crunch.

The beef was shocking delicious and I do not say that lightly. It cut like a stick of butter left out on a warm day. The au jus was swimming all over the meat and bun making it almost impossible to hold but I didn't mind. I was so surprised how much I enjoyed it and how fast it went down. I easily could have one of these a week. This is a meal that resembles fast food but actually has a restaurant quality about it. Now I know I have to try the Gargiulo’s burger next.

As if this weren't enough to temp you to visit, Zagat Guide names Brennan and Carr as one of the best sandwich shops in all of NYC. For the names of the others see the third link down below.

Brennan and Carr is commonly linked to another beloved Brooklyn gold mine,  Roll-N-Roaster. I too am a big fan and have been there numerous times over my lifetime and written about it twice before, once in 2015 (http://bit.ly/2tl40hA) and posted an update in 2016 (http://bit.ly/2ruIB4j).

Having now had my own religious experience at Brennan and Carr I have to agree with others, Roll-N-Roaster has been beat. Normally I do not order the roast beef there, although its quite popular. The one time I did I was soooo no impressed. It was chewy and despite it being well-done, covered in gravy and cheese, I couldn't manage more than a few bites. While many love their version I really think we all go to Roll-N-Roaster for their cheese. In my humble opinion that is their speciality.

Since Brennan and Carr is an old school establishment, they still only accept cash, and do not have any social media accounts nor do they even have a website. So checking their info out becomes a little bit of a problem. I had to rely on other reviews and articles to gather whatever background I could.

While doing this research I uncovered another Brennan and Carr, however, this one was located in Rockville Centre, Long Island. There was only one website that listed it so I called to inquire further but the number was no longer in service thus proving their can only truly be one Brennan and Carr.

Turns out you really don't know unless you go.