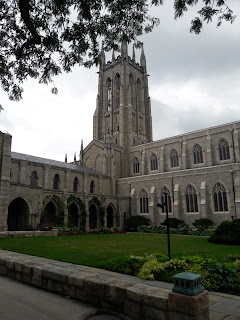 After touring Cairnwood I was feeling even more eager to step inside the Cathedral which was just a short walk down the hill from the estate. But taking the weather into consideration and my affinity of being lazy it was much easier to just pull the car around. Once the skies opened up it was clear I made the right decision.

Now that we have explored John Pitcairn’s life it is time to turn to his firstborn child, Raymond. Here I feel compelled to type “Everybody Loves Raymond” whether or not that was true. 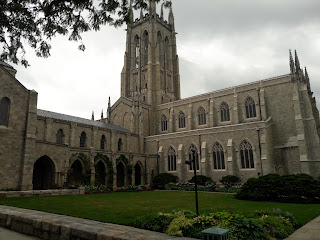 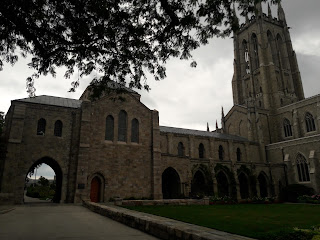 From an early age Raymond had a love of all things Gothic. He was fasciated with architecture and from the age of fourteen his parents began taking him on numerous trips to Europe in order for the young teen to study what he loved.

As an adult the first building that Raymond felt needed to be constructed was a cathedral on his family's property. The Bryn Athyn Cathedral as it was to be called, for was the community to come together and follow along in the practice of the New Church.

His father John provided the funding and Raymond was the visionary behind it. 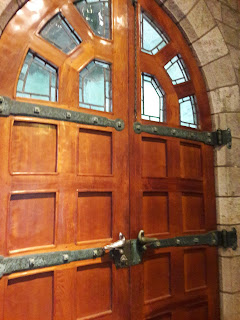 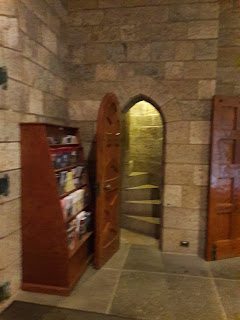 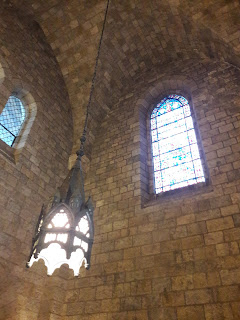 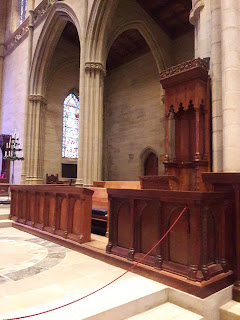 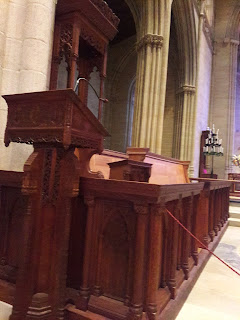 Like with the construction of Cairnwood, workshops were set up around the development site for each craft (i.e. stained glass). This process allowed men from multiple crafts to work together and directly on the pieces being assembled for both the building and its design. While the work was done there the materials came from all over. Raymond also had pictures sent from his favorite churches in Europe to incorporate the aspects he admired. Workers were pained ensuring that the colors created for the stained glass windows were exactly right. The windows themselves represent teachings from the New Church, which is the other major influence in the design of the cathedral. For example, the “bends in elevation” are demonstrated through the vertical and horizontal lines in the design.

The oldest part of the Cathedral was completed in 1913. Construction has continued   on and off during the 1920s and 1940s. Restoration has taken place in recent years to maintain the fountain and other structural supports. When the earthquake hit the East Coast in 2011, Bryn Athyn Cathedral was luckily not effected because measures had been continually taken to ensure its safety. This is unlike the situation at the Washington Monument which only reopened last year after several years of work to restore it to a place where it could be open to the public once again. 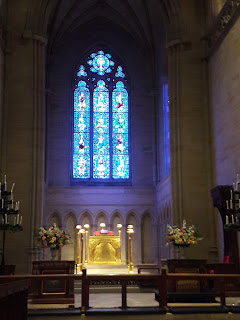 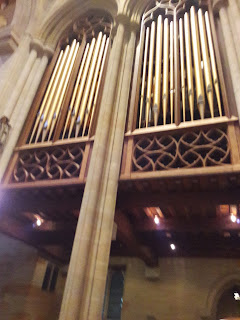 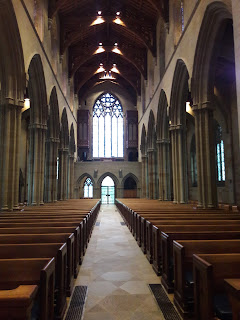 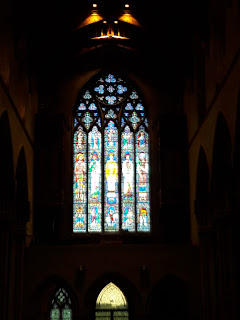 The front altar area of the cathedral has three planes. The first is the earthly plane, the second plane (a literally step above the first) is the celestial plane, and the third and final plane is the spiritual. The spiritual plane is the highest and closest to a Godly blessing thus is it positioned in the highest part of the altar. Whenever possible the Bishop performs that blessing. Couples married in this cathedral have their marriage blessed three times over. Who doesn't need that?

This part of the cathedral reminded me a great deal of a smaller version of Westminster Abbey in London, where the Duke and Duchess of Cambridge were married. When I visited back in 2009 I thought it was one of the most beautiful churches I have ever seen. The Bryn Athyn Cathedral is easily on that list as well.

My guide provided me with more than just information about the bricks and mortar. She told me about the faith and the people who congregate here. It was one of the rare occasions you can have a discussion about religion without conflict, indignation, or righteousness.

This branch of the Christian faith I have learned is Episcopalian. I find that they along with Lutherans are the less strict versions of the Catholicism I was raised with and because of many issues we disagree on I can no longer get behind.

The main tenement of the faith of the New Church is to hone your talents, whatever they may be. As you use them to help society in this life those talents will ultimately serve your “God” once you pass on. They believe that no matter if you pass on when you are young or old that your purpose has been fulfilled on earth. Best of all there is no judgement whatsoever on you who are or who you want to become.

This cathedral performs both weddings and funeral masses and I am told both are equally beautiful in their own way.

The weddings that take place at both Cairnwood as well as at the Bryn Athyn Cathedral generate all of the funding necessary to maintain these structures!

That is an incredible feat. Government funding for historic landmarks is lagging and usually the admission fees are not nearly enough to make up the difference for the expense of preserving older buildings. I am glad to see that these facilities will continue to be enjoyed as one happy event begets another.

For those who cannot get to Bryn Athyn Cathedral but wish to see the services or ceremonies they are available for viewing online.

Ever since my visit I have not stopped thinking about what I learned during this part of my visit. For a non-practicing Catholic like myself, I found this to be a place with great spiritually were love was clearly present.

I was delighted to see how they accommodating for all of the practitioners in their community. There is a special mass just for pre-school age kids. There is a mass attended by youngsters who play sports who come in their gear to a mass that lets out promptly at 10:15 a.m. so that they can be on the field by 11 a.m.

There are the more spirited events that take place at Bryn Athyn College where the typical hymns and church music has been spiced up rock n’ roll style to appeal to  young adults craving a bit more fun mixed in with their religion. There seems to be something for literally everyone.

Suddenly I felt like I too found a place where I belonged.