For a Piece of Heaven Right Outside of Philadelphia: “Bryn Athyn Historic District” Part I: Cairnwood Estate 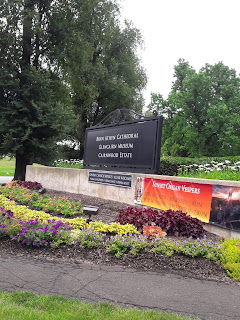 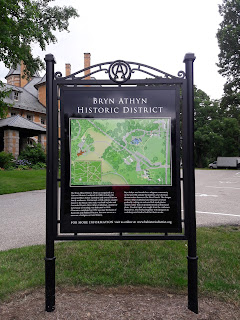 We begin by entering the home through the door adjacent to the Garden House. It is the way I wish I entered my own home.

I am at the first building of three I will visit today. It looks like it might pour at any moment and the humidity in the air feels so thick you may need a knife to clear a path for yourself, much like a machete would clear jungle brush. But somehow this weather seems appropriate for this visit. 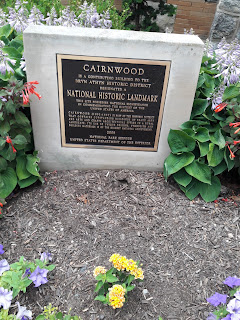 The building upon which I enter is Cairnwood, the beloved home of owner John Pitcairn  Jr. and his family. John Pitcairn Jr. immigrated  from Scotland to Pittsburgh at the spry young age of five. His working class family became members of the New Church and young John makes another connection in Pittsburgh that will also last him a lifetime, friend Andrew Carnegie.

John goes on to establish the Pittsburgh Plate Glass Company and gain his fortune in the oil industry. John and his wife Gertrude had six children (one of whom, Raymond, we will discuss further in the next blog) and take the New Church in a whole new direction. 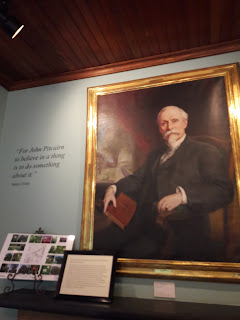 John Pitcairn Jr. purchased eighty-four acres of land in Huntington Valley, about a half hour or so north of Philadelphia in the town known as Bryn Athyn. He built two separate schools, one for the boys and one for the girls. They are still in existence and now over a hundred years old. Currently Bryn Athyn College is located across the road from his personal property. 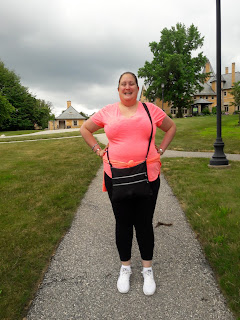 In a unique move, that would become a signature of this family, John Pitcairn Jr. makes a unique decision. Instead of purchasing the stained glass, stone, wood, carvings, statutes, and other materials from Europe to furnish and design his home, he had the craftsmen set up shop on site. In the future when working on the cathedral and Glencairn (see next posts) the workers would be working on the projects directly, each with their own special skill set. The amount of detail in each of these buildings is remarkable and to think they came to work each day without a sheet of instructions to follow just goes to show you how talented they were. 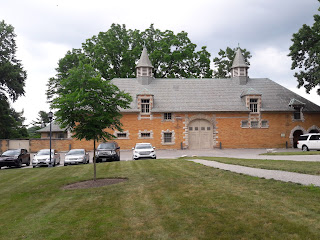 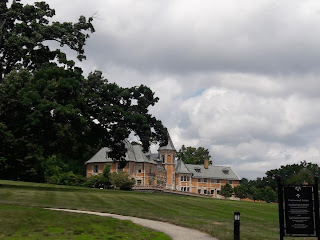 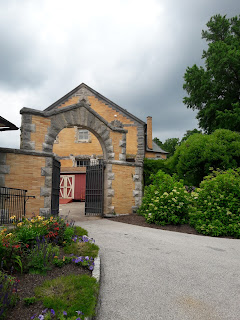 Cairnwood Estate was completed 1895 after three years of construction. The famous landscape architecture firm of Olmsted, Olmsted and Eliot, drew up the plans for the neighboring farm community as well as the estate. Founding partner Frederick Law Olmsted you will note is the man behind Central Park back near my neck of the woods.

This estate was done in the Beaux Arts style of architecture and has three floors. One side of the home was for the family and one side was for the staff. Surrounding the estate are stables, garage, and aforementioned Garden House. 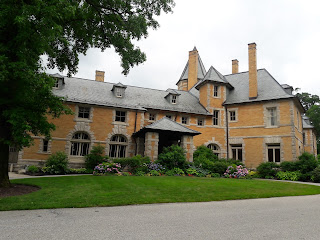 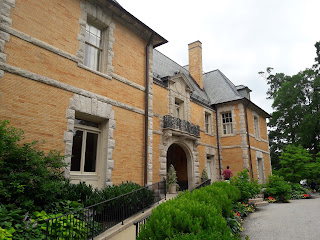 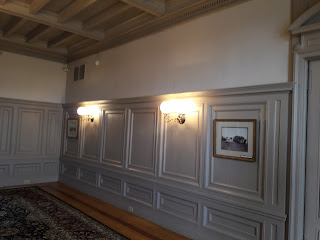 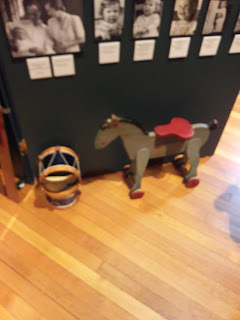 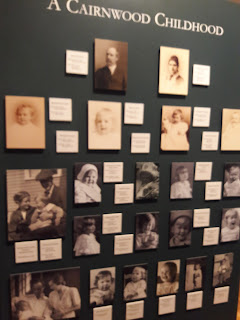 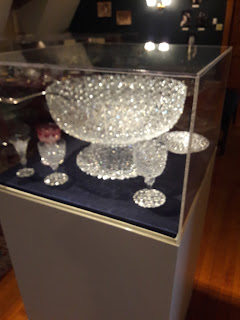 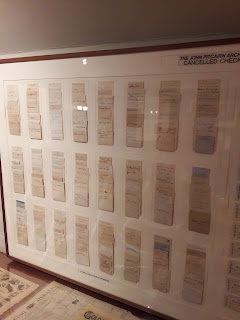 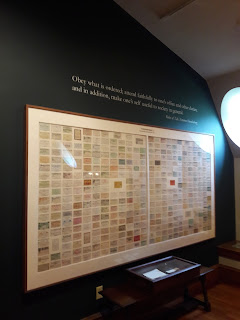 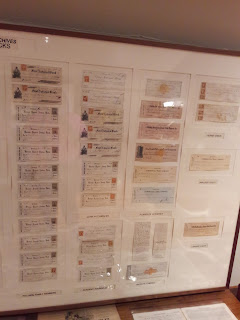 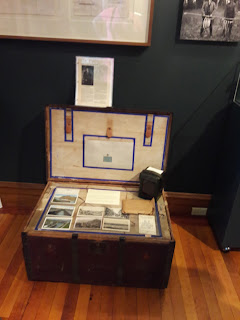 One of the first rooms I went into was that of a woman who lived and worked at Cairnwood. Contrary to other grand estates I have visited (http://bit.ly/2sWhRv3), the Pitcairns truly embraced their employees as part of their family. They even paid for weddings held on their grounds. Despite the enormous wealth the family had it was their strong religious beliefs the kept them grounded no matter what. 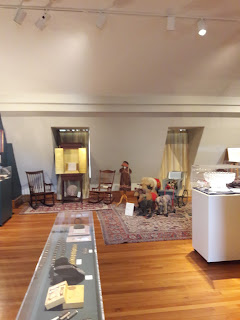 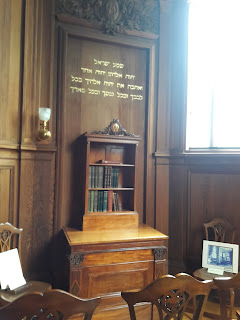 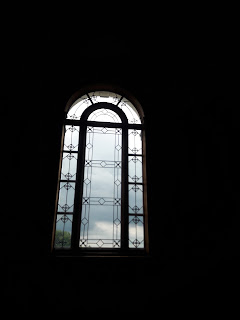 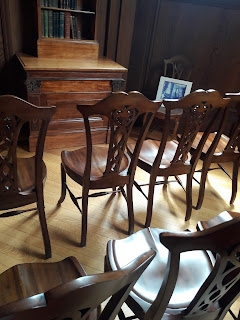 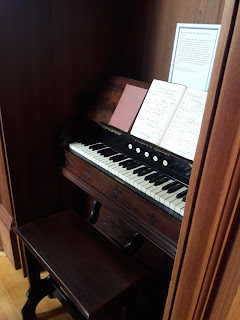 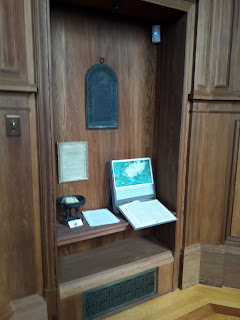 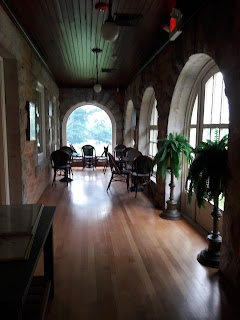 I later learned of a story that took place during the beginning of World War I. The workers in John’s glass factory over in Brussels were unable to cash their pay checks due to the uprising. Upon hearing of this, John Pitcairn filled a suitcase with as much money as he could carry and took it overseas to those workers before returning home. He valued the lives of everyone equally placing only God above all.

These morals are visible with just once glance at Cairnwood. You will see the highest point of his home is the steeple which holds within it the family chapel. Each day the family said their prayers in that tiny but beautiful room never forgetting what was really important. I find that so admirable.

During my exploration I was able to get to visit the room that was formerly the children’s playroom. It in were many of the family’s mementos such as their dining room furniture, place settings, crystal punch bowl, and some of the children’s toys. But my most favorite had to do with John himself, a man who by this time I was quite fond of.

Hanging on the wall were all of the train rail passes he had collected throughout his life, spread out clearly in a glass frame. I loved seeing the history of his life and travel laid out this way. I too keep that kind of paperwork for sentimental reasons so I felt a strong connection standing beside it.

Similarly, on display, were the many checks and receipts he gathered from his many years in business. Rather than a hoarder, I feel like John knew the value of his life story and cherished each step he took.

The final piece to get me excited in this room was the travel trunk he used. Upon one of his final trips he went through the newly opened (at that time) Panama Canal. Due to his knowledge of pipelines he immediately noticed many problems that would ultimately prove to cause its collapse in 1890.

Gertrude passed away in 1898. John never remarried and if ever he was asked why not his reply was always: “I would no sooner remarry than if Gertrude were standing in the other room.” This is the quality I am looking for in my future husband.

John remained living at Cairnwood until his death in 1916.

Fast forward a bit and his grand-daughter (son Raymond’s daughter) Gabriele Pitcairn would live here with her husband Reverend Willard Pendleton from 1945-1980. Ironically she grew up in the Gothic Style mansion her family lived in next door.

Seeing theses two homes on the same, albeit enormous plot of land, made me think of the family on the television series Dark Shadows (http://bit.ly/2upqB13). There was and “old house” and a “new house”. But I am in the middle of watching all twenty-six seasons of that show so there isn't much that doesn't remind me of it.

After Gabriele and her husband were no longer living at Cairnwood it remained empty for some time, even though it had been gifted to the New Church. From 1994-1995 it was opened up as a designer showroom in order to raise money for restoration. From there it transitioned as a place opened to the public and finally became a National Historic Landmark site in 2008.

Although some of the family rooms on the other side of the house were being used for a private event and thus unseeable, I still felt like I had seen what was most important.