For Find Out Friday - Week 42 Who is the Paisan Honored on The Bridge That Connects Brooklyn and Staten Island? 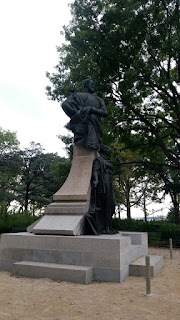 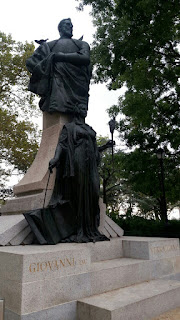 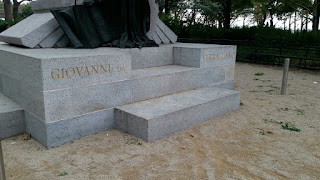 Oh the boroughs. While it takes all five to make up NYC as a whole there is much debate about which is the best. Manhattan has to come in first place as it is the center of the financial, fashion, and entertainment world second to only LA. But as a proud Brooklynite I say that my borough comes in second place. 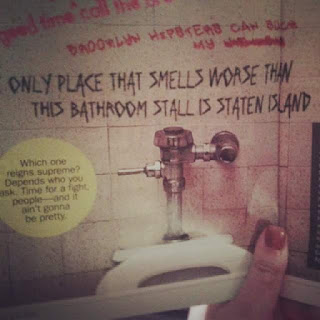 In last place, I think most of us bridge and tunnel crowd would agree, is Staten Island. Sorry, not sorry. I don’t know if it is because of the traffic, the fact that it links NYC to NJ, or the simple fact that it is a dump because it has one (true story). They also had the saddest zoo I have ever seen. I don't know if it is still open but I went there back when I was in grammar school and they literally had a peacock, a few snakes in a tank, and like a squirrel. It was pathetic.

But the reason I am harping on Staten Island isn't because I am in the mood to be a bully but rather I have been thinking about the structure that links Brooklyn to Staten Island: The Verrazano - Narrows Bridge.

Yesterday while strolling through Battery Park I stumbled upon a statue memorializing Giovanni de Verrazzano. Of all of the people I thought it could be, Verrazzano took me quite by surprise. Why on Earth does he have a monument dedicated to him? And why on God’s green Earth is it in lower Manhattan? I never found out the answer to the latter question but here are the goods that answer the first.

The Verrazano Bridge was completed in 1964 after five years of construction. It was last major project designed by Chief Engineer Othmar Ammann whose other notable works are the George Washington Bridge and the Lincoln Tunnel. Clearly he had a thing for NJ.

The Verrazano Bridge is the thirteenth longest main span bridge in the world and longest in America. It serves as the entry way for ships coming through New York Harbor and since 1976 as the starting point of the New York Marathon. NYC Mayor Robert F. Wagner cut the ribbon at the opening ceremony and was the first person to be driven over the bridge.

While I could drone on and on about the statistics of the Verrazano bridge I chose to focus on the man behind its name. What, if anything did he do to get chosen for such an honor?

Giovanni de Verrazzano was born in Italy in 1485 (died in 1528) and was an explorer of North America in service to King Francis I of France. Verrazzano’s major achievement was being the first European to explore the East Coast of North America while searching for a route to the Pacific, particularly the regions between Florida and New Jersey. He is the first documented explorer to enter New York Harbor and the Hudson River doing so in 1524. He was later killed on a subsequent voyage.

You might have notices one minor problem. No, I did not make a spelling error. The bridge that is supposed to serve as tribute spelled the man’s name WRONG?!! Only in NYC I swear.

Don’t worry though those in charge are all over it. Well, sort of.

Even though the bridge has been opened and named since the 1960s it only came up to debate in early 2016 when a college student named Robert Nash started a petition to correct the error in the spelling. He now has the support of Senator Golden and Lanza as well as numerous New York based celebrities like Robert DeNiro. As of December 2016 the MTA had received letters about the petition and the debate is allegedly under review. I wonder how long that will take.

That is not to say there was never controversy prior to this. When the bridge was first opened there were many who were enflamed by the name chosen so much so that some refereed to it purposefully as the Narrows Bridge. I suppose its the way I felt about the Hugh L. Carey Tunnel (http://bit.ly/2vOGb3V).

The name was recommended by the Italian American Historical Society in 1951 during the planning stages. Though many in politics had never heard of the explorer the society didn't give up and continued to lobby the government and state officials.

The name was finally passed into law by Governor Rockefeller in 1960 but when JFK was assassinated in 1963 lobbyists took the matter up with then NY Senator RFK who said that the original name should remain. Eventually the former Idlewood Airport was renamed to honor our fallen president.

Prior to this the only famous Giovanni I knew of was Versace. At least this story has a happier ending especially when you consider the only other Italian explorer ever mentioned is Christopher Columbus and we know the hoopla that surrounds his legacy (http://bit.ly/2uIfddS).

Since I would like to end things on a more peaceful note than I began, I will share a clip of one of my favorite movies of all time - Saturday Night Fever. In it John Travolta’s Tony Manero is showing his lady love his favorite spot in all of Brooklyn.

You can guess what its of. But I still think its worth a view.

FYI if you plan on going over the Verrazano Bridge any time soon be sure you have at least seventeen dollars on hand.