For a Twist on the Classic Bacon, Egg, and Cheese: “Olmsted” 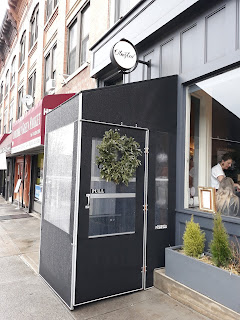 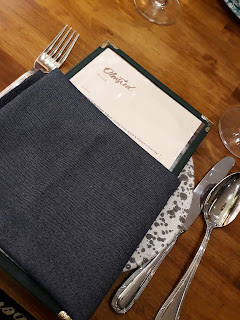 If you are a New Yorker there are two things you need in order to have a successful morning: a proper cup of coffee and a bacon, egg, and cheese sandwich (BEC). The pair go together better than peanut butter and jelly. Especially since I am not a fan of the latter.

But last year, right in time for my annual to do list (https://bit.ly/2JSFq4u), I read an article in Conde Nast Traveler that peaked my interest. It was featured in their March 2018 issue and the article I read was entitled “32 Best Restaurants in New York City”.

On the list was a classic Brooklyn spot where I have spend a meal or two; “Roberta’s” (https://bit.ly/2RUOGYZ). There was also a spot that will likely appear on the my next annual to do list when it posts next month; “Barbuto”. As per the Cooking Channel’s “The Best Thing I Ever Ate” this spot got my attention for their spaghetti carbonara when it was featured recently on this television show.

But we are not here to talk about the past or the future. This is about an item I gladly crossed off this year’s to do list; “Olmsted”.

“Olmsted” opened for dinner in May 2016 and began serving brunch in March 2018. And that is why I was there. More specifically I had heard about their bacon, egg, and cheese egg rolls, and I hadn’t been able to think about much else since. 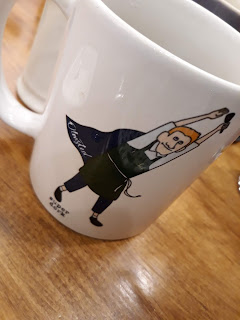 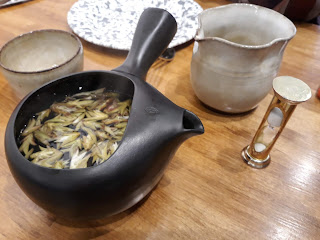 Named for Frederick Law Olmsted, famed for his creation of New York City’s Central Park and Prospect Park coincidentally located nearby, his firm is also behind some of the great manors I have visited such as: “Cairnwood Estate” in Bryn Athyn, Pennsylvania (https://bit.ly/2SxZBZT) and Doris Duke’s “Rough Point” in Newport, Rhode Island (https://bit.ly/2WWLETI).

“Olmsted” is a farm to table restaurant that seeks to procure fresh and seasonal produce for those seeking not to spend a fortune for a quality meal.

The restaurant decor plays with the balance between indoor and outdoor using something they call a “living wall” which is basically a large live plant form of wallpaper.

When we sat down, my party of three, was instructed by our waitress that the plates were made to be shared so that we should pick two or three dishes to start with. 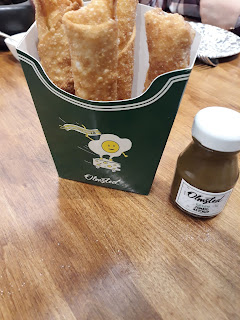 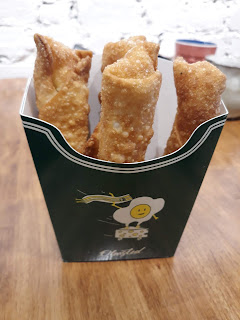 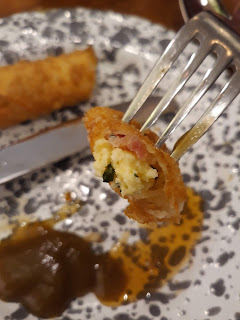 Obviously the first one was a no brainer: egg rolls filled with smokey bacon, farm fresh eggs, and Vermont cheddar served with green ketchup, along with Austrian donuts filled with jelly, a potato latke served with lemon creme fraiche, as well as spinach borëk potatoes made with eggs and Feta cheese.

Can you tell we were hungry?

Those egg rolls were better than you can even imagine. They were delicate and the bacon was diced so fine you only noticed it was present because of the hint of smokey flavor you tasted. My God I would go back just to have two orders of these all to myself. 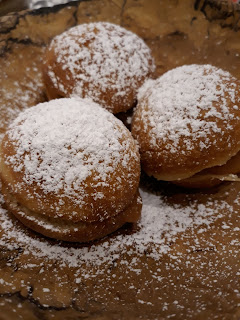 The donuts got attacked next and they were my second favorite part of this meal. They were light, fluffy, and the jelly was a sweet raspberry. 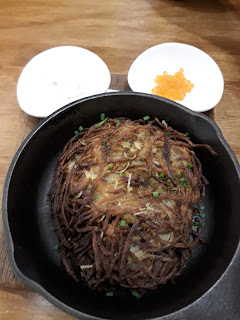 The potato latke was a one giant serving and was delicious. I mean how do you mess up a potato latke? It is one of the greatest foods on this planet. 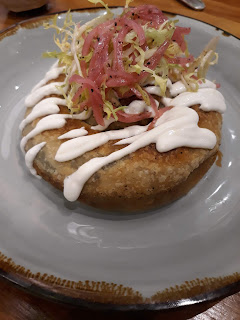 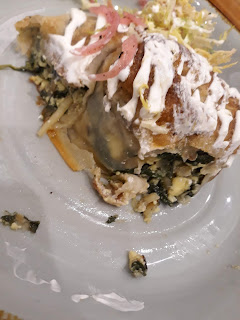 Lastly I reached for a forkful of the spinach borek potato which a kind of spinach pie. It was tasty but I was full by this point as were my companions so this got the least amount of attention. We all were, however, still talking about the now long gone egg rolls. I am telling you they are something.

Please note: Brunch is only served on Friday - Sunday and I highly recommend making a reservation as this restaurant’s fifty seat capacity fills up fast, for good reasons.