For Find Out Friday - Who Put the Ranch in Hidden Valley? 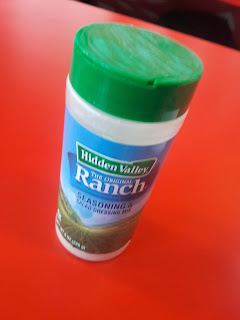 With Super Bowl Sunday approaching this weekend, is there a better time to talk about dip and chips?

When I am not watching a true crime show (which is most of the time) the odds are  high that I am catching up on “Food: Fact or Fiction?”. Host Michael McKean tells us the true stories behind the foods we love (episode is first link below).

Last week he shared a tidbit about one of the most beloved products in American history: ranch dressing.

I was stunned by what I learned and knew I had to explore this story further on my own.

Turns out ranch dressing was created on a ranch. Mind blowing, I know.

And the brand that is the most popular and captivated the market is of course Hidden Valley Ranch.

So if ranch dressing was created on a ranch, can you guess the name of the ranch?

Yes, it is Hidden Valley.

Hidden Valley Ranch was purchased in the 1950s by Steve and Gayle Henson and is located in Santa Barbara, California. Formerly known as Sweetwater Ranch, the couple renamed after making it their home.

The ranch was a working dude ranch and Steve had long been working on a homemade dressing that he would put on the salads he served his employees. This tradition started in the late 1940s when he was working as plumber in Alaska. When the couple purchased their own ranch, his dressing soon became the stuff of legends.

A combination of mayonnaise or buttermilk, dill, garlic, onion, salt, pepper, and other herbs, proved to make the vegetable eating process MUCH more enjoyable.

Soon friends were asking Steve for packets of his herb mix so that they could bring it home, add in their own dairy, and eat as much salad as they could get their hands on.

Before he knew it, Steve was selling his packets and even purchased a mail order business so that he could ship the good stuff to his customers anywhere in the country. His son Nolan remembers his childhood filled with days of creating those very packets.

The success of the mix increased greatly in 1983 when a bottled version, which has a shelf life of one hundred and fifty days, was created. By the late 1980s ranch was a dip and in 1986 Cool Ranch Doritos were launched. In my humble opinion they are the single greatest invention in the culinary world, or rather the scientific world. As of 2017 the products associated with this brand raked in over four hundred and fifty million dollars.

Today, ranch in its many forms it well ingrained in pop culture and our lives. People are getting kegs and fountains of the stuff for their wedding receptions as well as buying giant inflatable ranch bottles as pool floats.

Hidden Valley Ranch has over fifty products including several varieties of the dressing available with bacon, avocado, and jalapeño added in. We love it on our popcorn, chicken wings, crudités, and especially on our pizza. I realized just how much when I visited the Museum of Pizza (https://bit.ly/2rsOJMK) late last year and there was a shaker of Hidden Valley Ranch on every table for our complimentary slice.

In yet another moment of pure serendipity, Matt Hyland of “Emmy Squared” (see previous post) loves ranch dressing so much his restaurant features a pizza where that is the main ingredient.

Taking that theme a step further there is a restaurant in St. Louis, Missouri completely devoted to dishes with ranch in them. It is called “Twisted Ranch” and serves over thirty kinds of ranch dressing. I hope they open a location in New York City soon.

Sadly, the actual Hidden Valley Ranch was sold in the 1970s. Otherwise you would have bet your bottom dollar I would have been half way through planning my visit there.

Instead I am going to head into the kitchen and pour a bit on ranch dressing on a dish and find something yummy to dip in it.