For My Family’s Initial Pilgrimage to Boston, Massachusetts- Presidential Footsteps 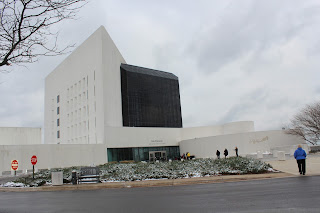 Well, this was a first for me. An item not on my itinerary ended up being one of the greatest things I did on my trip. Talk about serendipity.

The John F. Kennedy Presidential Library and Museum was not on my to do list on this first visit. Sure I longed to go there but I didn’t think I would have the time.

But God works in mysterious ways.

On the second day of my trip I woke up to snow. Not a lot of snow but a steady amount of flurries non-the-less. It was also wicked cold, as they would say in Boston. 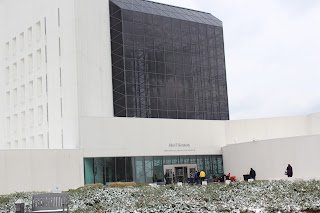 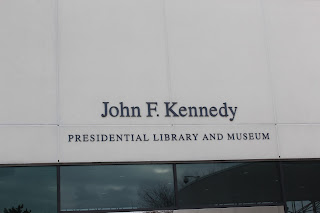 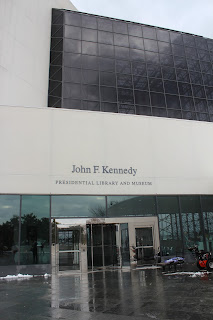 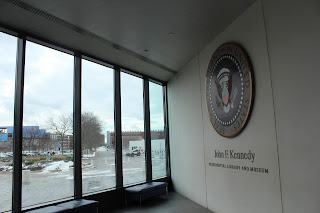 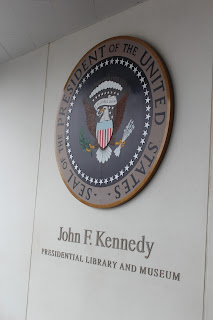 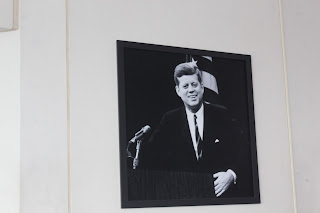 So my original plan of walking the Freedom Trail and seeing those sights no longer seemed like a good idea. Instead I suggested the presidential library to my group and everyone was way in.

Now visiting a presidential library is a must do whenever possible for me. It is crucial that I visit all fifteen as soon as possible. 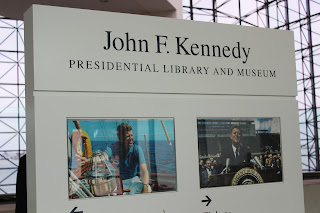 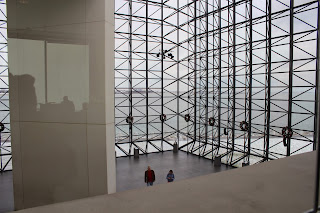 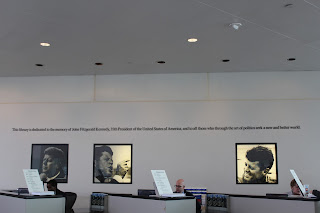 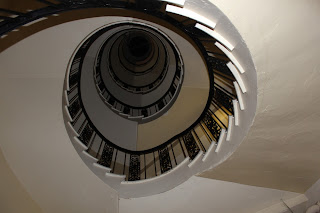 All totaled I have visited four presidential libraries, including J.F.K.’s:
But the John F. Kennedy Presidential Library and Museum was my very first experience. I believe it remains my favorite to date.

Walking in I had no idea what to expect. I was just very curious and eager to get inside.

Photography wasn’t allowed inside which is rare. Usually, non-flash photography is ok. That was the case for the other presidential libraries I have been to. I really wish that had been an option here. But some images remain ingrained in our brains no matter how much time has passed.

I will begin with what I remember most because of how unexpectedly moved I was by it. Somewhere in the middle of the library you come upon a replica of the office used by Robert Kennedy when he was Attorney General.

Whoa those feelings are bubbling up once again.

Objects in this room are those that would be found in any office like a desk, pens, pencils, even the phone he used. Then they are the precious items like the helmet worn by one of the U.S. Marshals who walked James Meredith, the first African American student, in to the University of Mississippi when he registered there. There was also a sign that read “White Women” restroom sign.

But it wasn’t really the things in the room that made it so powerful. It was more that it existed as a reminder of how much tragedy our country endured during those years. All of the good people who suffered injustices and others who died trying to change the status quo. It was all too much.

As for the main man himself, the library tells the story of his life from childhood all the way through his assassination.

The John F. Kennedy Presidential Library and Museum broke ground on June 12, 1977, and was completed by October 1979. It stands in the long tradition first established by sitting President Franklin D. Roosevelt who had left his home in Hyde Park, New York, and a library on the property with all of his personal papers and treasures, open and available for all to appreciate.

The designer behind the Kennedy Presidential Library is I. M. Pei known for creating the Rock n’ Roll Hall of Fame in Cleveland, Ohio and more notably The Louvre in Paris, France. I have yet to visit the former but it is on my long term travel list. As for The Louvre I found it an amazing place to visit despite the original outcry from locals.

The Library is funded privately by The John F. Kennedy Library Foundation that began with twenty-million dollars raised by Robert F. Kennedy after his brother was murdered. The Foundation continues to raise the funds necessary to run and maintain all aspects of the Library and Museum.

The Foundation mandated that the Library have three parts: a museum, and archive, and provide educational resources that would support the issues J.F.K. rallied behind in both the academic and political arenas.

Some of the notable items on display are:
There are also many pieces from Mrs. Kennedy including some of the outfits she wore during important state dinners, tours with her husband, or media events.

But my favorite room of the President’s was the one I have come to expect in every presidential library I have visited since; the Oval Office.

Replicas of Presidential Oval Offices include their personal effects as well as those that were chosen from White House Archives to create a space that was uniquely their own. When you step into these rooms you get a feel for the man behind the desk.

In President Kennedy’s Oval Office there is a Carolina rocking chair, pictures of his children, fisherman’s pray plaque, inaugural medal, among other things.

While standing in these rooms I begin to think about the particular challenges that president faced making me wonder how the objects he stared at during those difficult times influenced him (and her once our country smartens up).

I recall that when I am writing or even struggling during the night with a migraine, I am always looking at the many photos and mementos around me for positive or inspirational thoughts. 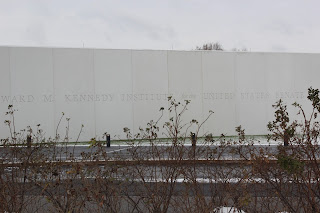 Back in 2014 when I visited, there was construction on the site next to the Library. Upon closer inspection I saw a familiar name on the building; Edward M. Kennedy. The institute bearing the late senator’s name is now open to the public and is a place dedicated to those who will represent us in the future. It is where you can learn about the Senate, the process of democracy, and how to advocate for oneself. The institute will connect the civil and political realms of our world. There is also a full size replica of the Senate Chamber inside.

The E.M.K. institute sounds like a worth wild visit so plan to spend some time exploring the past, present, and future whenever you go.