For Find Out Friday - What State Was the First To Make the Donuts? 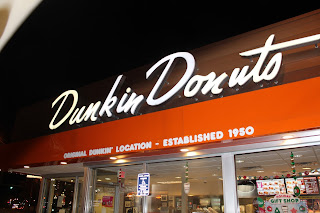 Since my Boston series only just ended yesterday I am still in that frame of mind. I found a picture that I had forgot about and it inspired today’s Find Out Friday.

Don’t get it twisted I am a Starbucks girl through and through but for this post I am going in a different direction.

I am talking about the history behind the opening of Dunkin’ Donuts.

As I made my way all around Boston I literally stumbled onto the answer to this question.

I was in the car, with my uncle driving his huge SUV, and we were trying to turn around. While doing that we practically ended up behind the counter of a Dunkin’ Donuts restaurant.

The man who had the bad luck to be working there that night might have needed a change of clothes but I found it amusing.

I also saw a sign that intrigued me: “Original Dunkin’ Location”.

Dunkin’ Donuts is sixty-nine years old. When I think of its age rather than the year it was first opened, it is mind boggling. To have such a successful business, filling a need in the service industry is something to be admired. As someone who is always interested in how people got their start and took their idea all the way to the bank, I always want to know the specifics. So here they are.

A man named William Rosenberg opened a small shop called “Open Kettle” in 1948 in the Quincy neighborhood of Massachusetts. This cafe served only coffee and donuts to go. It wasn’t until 1950 that it was renamed “Dunkin’Donuts”.

As a child growing up in the 1980s this was a signature commercial of the times.

It is something every person my age will remember and a saying I still use to this day…obviously.

As per Dunkin’ Donuts themselves here are some interesting facts:

In an article in the Boston Globe in 2011, this historic location had reason to celebrate. Instead of demolishing it, the brand decided to embrace the significance of this location by giving it a more retro look, similar to what it was like in 1950. It continues to have limited parking as it did back then as well as no drive-thru.

I remained curious about the name change, while it makes sense to us now, I wanted to know who came up with it.

William Rosenberg’s son, Bill had this to say:

“The family thought the Open Kettle name did not say much about its products, and asked the store’s architect for advice.

What do you do with a doughnut? You pluck a chicken. You dunk a doughnut.”

Despite being able to have your Dunkin’ anywhere in the world, there’s really no place like Quincy.