For Find Out Friday - What is the significance of Shirley Temple and Breast Cancer? 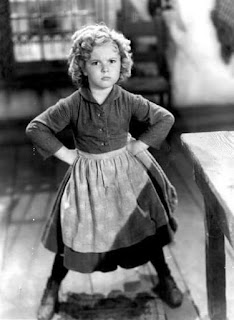 Once upon a time there was a world in which there were no iPads, no computers, and no smart phones. We didn't even have the Internet.

For entertainment people visited one another and weren't looking down at their devices. They would communicate face to face. Hard to imagine, I know.

To elevate the thrill level sometimes we would watch tv or pop in a video. Oh how many VHS tapes I had.

While a certain famous tiny curly haired actress was before my time, I have a great many memories of watching her movies with my grandmother. I still have flashes of watching Shirley Temple in Little Colonel, Bright Eyes, and Curly Top.

Mostly I remember Shirley Temple dancing with Bill “Bojangles” Robinson as you can see in the clip below.

Shirley Temple made a total of fourteen movies retiring from show business by the age of twenty-two.

Until I read an annual piece in the New Times called “The Lives They Lived” for the first time in 2014, that was pretty much the extent of what I knew about Shirley Temple. Besides that, she had added Black to her last name after her second marriage.

But this article about all of the people we lost that year who contributed to our worlds in ways we may not have known about, changed all of that for me forever.

Shirley Temple Black passed away at the age of eighty-five on February 10, 2014. She had three children whom I assume she believes were her greatest accomplishments. But I think there is another significant act that needs to be added to the list.

For me, I feel that there are three main things to know about Shirley Temple.

First, she had a very successful movie career and is still the youngest person to ever win an Academy Award at age six. She won numerous additional honors including a star on the Walk of Fame.

Second, the drink named after her was not up to her standards. The story goes that the drink was created by a bartender at The Royal Hawaiian Resort in Waikiki, a place the little lady had visited many times. The drink was a way to honor her. However the Brown Derby claims to have invented it for the same reasons. Either way Shirley Temple did not seem to be a fan claiming her namesake was too sweet.

I loved, loved these drinks when I was young. My cousin Denise and I always thought we were so cool going up to the bar at a family function and ordering a “cocktail”.

It makes me smile to see the next generation doing the same thing nowadays. I love teasing them that I hope they are not drinking and driving. I always get the same crazy looks.

The third and last fact about Shirley Temple Black, is the most important and fascinating. In 1972 at the age of forty-four her life hit a stalemate. She found a lump in her left breast. Common protocol at the time was to have the entire breast removed all the way down including the chest muscle. The lymph nodes were taken as well.

Shirley Temple Black changed all of that.

She fought with her doctors over the rationale of this treatment and demanded that the lump be taken out only and tested. Perhaps because she was famous or like myself just a tough broad, that is what happened.

Sadly though the results were not good. She ended up having a mastectomy which she had said was really just an amputation. That description is profound.

But once again Black did things her way. She had a so-called “simple mastectomy” in which just the breast tissue was removed. The chest wall and muscles were left intact.

Lucky she recovered and spent the rest of her life as a fierce breast cancer awareness activate. She was the very first celebrity to do so. She was also the first to speak publicly about an ailment especially such a personal one. She correctly believed that early intervention would save lives.

Many including the American Cancer Society, disagreed and were worried women would be afraid of an open discussion. Figures, women never get enough credit for our strength.

Black has been quoted as saying: “don't sit home and be afraid” in McCalls magazine the year after her diagnosis.

Even as I sit here and write this I am still in such awe of her. It may be hard to conceive of this in our times but this happened in a world were there were no pink ribbons for breast cancer support and there were no walks to raise funding. For that matter breast cancer was on the back burner of the public’s mind.

For Black to speak out so openly and bravely has truly changed the way all of the women who were diagnosed with this disease since have been treated.

Shirley Temple Black was a pioneer of many fields and always seem to be way a head of her time.

In the years following her battle with breast cancer she became a U.S. ambassador to Ghana as well as servant for the government’s Office of Diplomatic Protocol.

Despite these great achievements I believe her journey as an activist was by far the most important role she ever played.