For Find Out Friday - What Celebrity Has a Hidden Connection to the Hutchinson River Parkway? 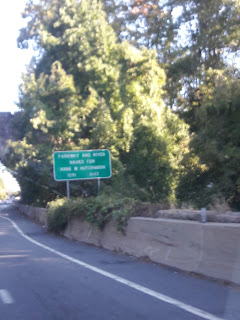 It really is a small, small world. Connections can be found in the most unlikely of places. Such is the story I am about to tell.

When you spend time on the same roads over and over again you start to notice something different all of the time. On my most recent passing I noticed a sign referencing who “The Hutch” was named for; Anne Hutchinson.

It was so random. I had never thought about who this parkway was named for. For that matter I traveled through the Hugh L. Carey Tunnel twice a day for years before it occurred to be to look up that man (http://bit.ly/2AdyYN2).

I took a fuzzy photo of the sign and saved my research for today.

Anne Hutchinson nee Marbury was a Puritan woman originally from England who resided in the Massachusetts Bay Colony most of her life. Along with her husband William and their eleven children, Anne had emigrated to the New World in 1634 following John Cotton, a preacher from their homeland.

Anne was a nurse and a midwife along with being a wife and mother. She was also a woman who believed in hosting meetings at her home so that the women in her community could pray, learn to read, and interrupt the scriptures for themselves. Sounds pretty harmless right? Wrong. In the seventeenth century a woman acting so boldly was the kind of actions that led to the Salem Witch Trials, in Massachusetts no less.

Anne was put on trial in 1637 and her punishment was banishment from the Colony. Her and some of her followers lived for a time in Rhode Island in 1638 but after the death of her husband in 1642, she was “encouraged” to move again. It was at that time she relocated to Pelham Bay, New York. A place you would now have to drive on Hutchinson River Parkway to get to.

Anne Hutchinson is famous for her fearlessness and her activism. I don't remember learning about her in school but I appear to be in the minority.

The parkway was completed in 1941 and named for this famous woman who defied the limited expectations of her time. Ironically there is now a statute and plaque honoring her in Massachusetts as well. In 1987, then Massachusetts Governor Michael DuKakis pardoned Anne Hutchinson thus voiding the banishment order from history.

I had planned all along to use Anne Hutchinson as the focus of this week’s Find Out Friday and it seems this was a decision my television habits seemed to support.

I was catching up on PBS’s “Finding Your Roots” when it happened. The episode of I was watching included Ted Danson, his wife Mary Steenburgen, along with William H. Macy.

This show similar to TLC’s “Who Do You Think You Are” except they deal with three like familial stories going back and forth.

Seemingly out of no where while reviewing Ted Danson’s family in the seventeenth century I heard a familiar name: Anne Hutchinson.

I had to rewind. Could this be the same Anne Hutchinson I was planning on writing about? It turns out she was one and the same.

I was floored. Of all the shows in all of the land Ted’s ancestor had ended up right in front of my face; twice!

I have always wondered what secrets and stories my detailed family tree would reveal. I wish it would say that members of my lineage were close friends of George Washington, even though my ancestors were not in America at that time. I also wouldn't mind it I were related to any of the Kings of France but again there is no likely hood of that happening.

Either way I long to create my own “Book of Life” whether or not I can get Henry Gates Jr’s help. Perhaps I will find out that one of the signs I have passed on the roads out of town belong to someone I have a connection to.

Ted Danson can't be the only lucky one out there; can he?