For the Sanctuary That is “The Stonewall Inn” 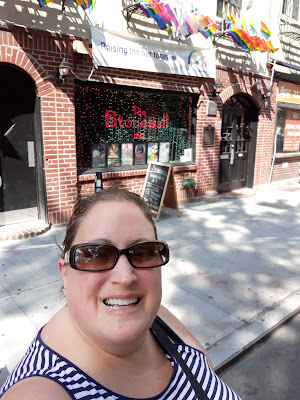 Do you have a favorite place?

If so, I am sure part of the reason it’s your favorite is because you feel safe and accepted there.

Imagine how much more precious that place would become if the majority of the rest of the world constantly berated you simply because of you who you were attracted to.

If you lived in NYC in the late 1960s and were labeled as “different” The Stonewall Inn could be considered a place of refuge AND fun. Soon it would be the scene for a riot so brutal it created a movement that we still celebrate today.

But before we get to that, we need to recap the history of this building and tavern up until that point.

The Stonewall Inn was originally known as “Bonnie’s Stonewall Inn” owned by Vincent Bonavia. Originally it was located at 91 Seventh Avenue South. At that time the bar was a tearoom that served light meals and non-alcoholic drinks. However, like most “tearooms” during Prohibition there was booze hidden in that tea. If you are looking to relive some Prohibition fun you can have Tipsy Tea at Tanner Smith’s as I did two years ago.

By 1934 (a year after Prohibition ended) The Stonewall Inn relocated to the place we now know it to be: 51-53 Christopher Street. Here the Inn remained as a bar and restaurant until 1964 when the interior was destroyed by fire.

In 1966, Fat Tony of the Genovese crime family, invested in The Stonewall Inn turning it into a gay bar/dance club. It is said to have been the largest bar of its kind in the country at that time.

Police raids were common for gay bars, especially ones operated by the mafia. It was an excuse for those officers involved to get a quick payout and allow the bars to stay operational.

But what differentiates the now infamous raid that occurred during the early morning hours of June 28, 1969, is that those targeted fought back. There are many versions about the details of that particular raid but most of them conclude that it was the violence of those arrested, especially of Stormé DeLarverie, that seemed to be the final straw.

The Stonewall Inn riots took place over the following few days as activists decided to start a movement we now call Pride.

The very first Pride March took place exactly one year later. Several hundred people marched from Christopher Street all the way toward Central Park. It became a symbol that other major cities like San Francisco began to emulate.

This year marked the fiftieth anniversary of the Stonewall riots that sparked the gay rights movement. This year is has been estimated that over one hundred and fifty-thousand people participated in the parade, while five million people attended, making it the largest celebration of its kind in history.

“By the time of Stonewall, we had fifty to sixty gay groups in the country. A year later there was at least fifteen hundred. By two years later, to the extent that a count could be made, it was twenty-five hundred. And that was the impact of Stonewall.”
-Frank Kameny, LGBT rights pioneer, 1994

I, myself, attended my first Pride March back in 2017. That is where my urgency to get to visit The Stonewall Inn really became strong. I really wanted to go the day of that parade but I couldn’t get anywhere near there, despite only being a few blocks away.

The bar is not original (technically now one building: 53 Christopher Street) and closed not long after the uprising. It served as several different restaurants before becoming vacant in 1987. A bar with the same name did reopen in that location from 1987 to 1989, but then closed again. At that time the historic vertical sign was removed. In 1990 new owners purchased the property briefly reopening the bar and called it “New Jimmy’s” until eventually changing the name back to Stonewall in 1991. The current management has been in charge since 2006.

In June 24, 2016 President Obama made headlines when he designated The Stonewall Inn and the area surrounding it, as our country’s first National Historic Landmark dedicated to LGBTQ history. This was also the day when the Stonewall National Monument dedicated to the historic events of 1969 opened. 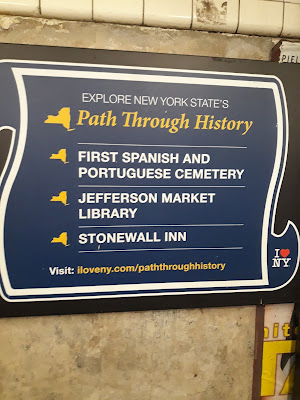 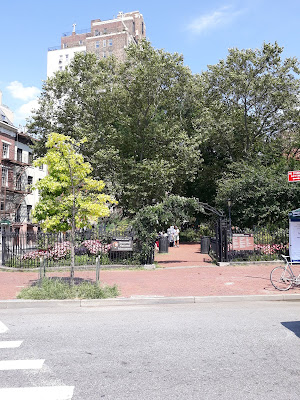 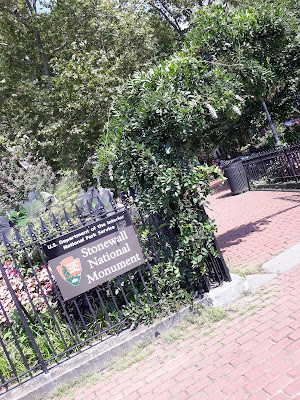 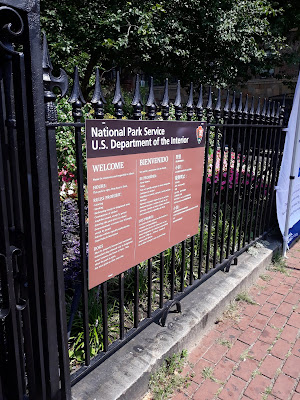 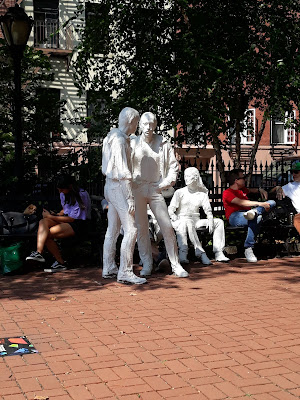 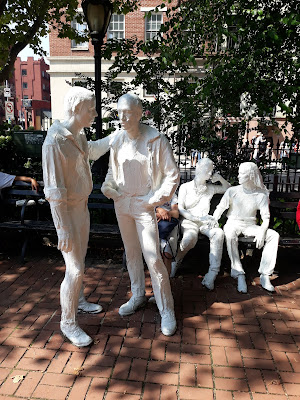 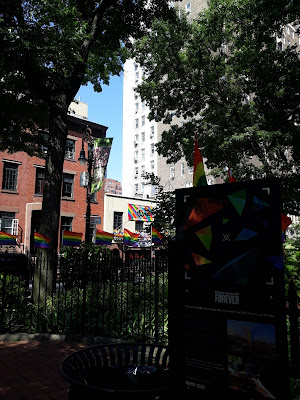 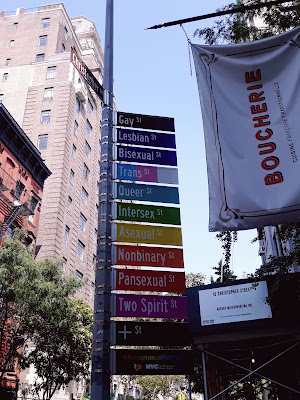 It wasn’t lost on anyone that this designation came nearly twelve days after the mass shooting at Pulse Nightclub in Orlando, where those killed and injured were predominantly part of the LGBTQ community.

Prior to that time, the buildings, park, and surrounding area had been protected by both City and State Landmarks Commissions. But to have Federal protection guarantees that this place which holds a special, now positive, place in history will be around for future generations. 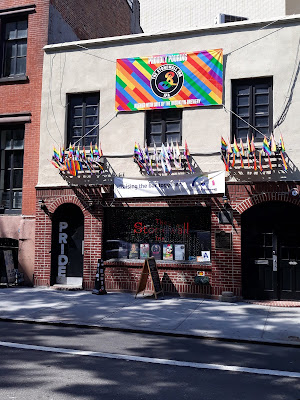 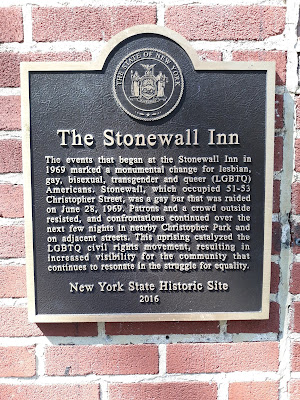 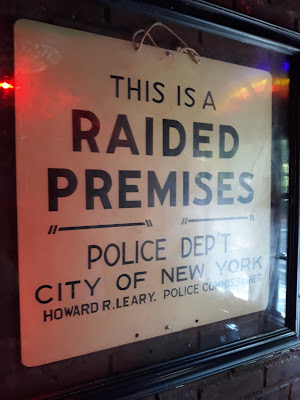 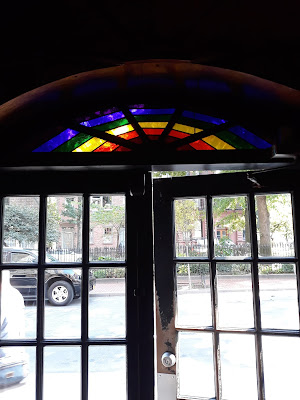 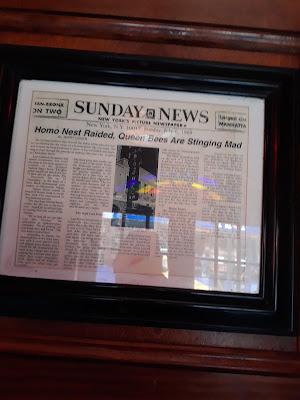 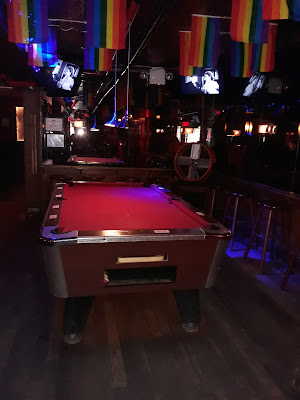 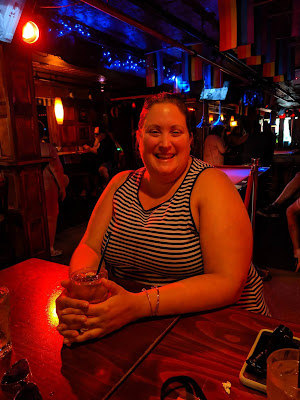 On the day of my visit, I went to the park first and sat there for a bit. I wanted to soak in all the energy that was around me. Next I walked around and took pictures of all the historic streets. The West Village is a phenomenal place to hang out. There is so much to do and so many great places to eat.

When I finally approached the bar, there was no one more excited on that street than me! I love visiting historic places, and with Stonewall there is so much emotion attached to it. As I say: “I may be straight but I do not hate”.

I had a drink and sat down for a while, and I was surprised to see anyone else inside considering it was daytime. Sitting at a table, sipping a vodka soda, looking all around, I was happy as a clam.

A few months ago, I visited the Auschwitz exhibit at the Museum of Jewish Heritage here in NYC. The things the human race does to one another never ceases to amaze and horrify me. There are no bounds when it comes to hate. Race, ethnicity, sexual orientation seem to be all up for grabs. I will never understand it. And I will never stop visiting the places that honor those who were brave enough to take a stand.

If you have even loved anyone who is apart of the gay community, or you just have basic human decency, will agree that hating and harming someone you do not know because of who they are (and who they were born to be), is despicable. It will forever boggle my mind and hurt my heart.