For Find Out Friday - Why Do We Carve Pumpkins For Halloween? 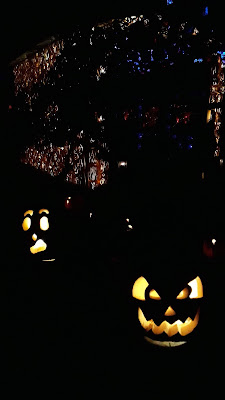 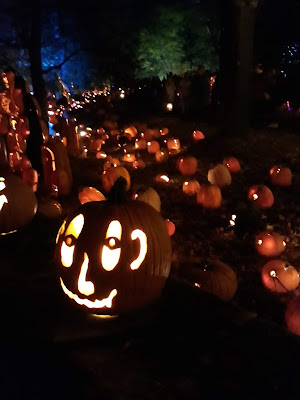 After my recent visit to the Pumpkin Blaze at Van Cortlandt Manor (see previous post), I have been feeling an ever-growing affection for pumpkins.

While I loved seeing how many amazing shapes pumpkins can be carved into, it suddenly occurred to me that I didn’t exactly know why or when we first started carving pumpkins. Especially if we were not creating blazes.

Though I had never really pondered this question, I am satisfied I could have guessed this answer.

The answer begins with a legend, not The Legend of Sleepy Hollow, but of Stingy Jack.

Stingy Jack was an Irishman back in the early 1800s. He was a man with a bit of a naughty side and was a bit of a trickster. I have read a couple of variations, which I will share with you now, about how dear old Jack become the muse behind Jack O’Lanterns.

Jack manages to persuade the devil not to talk his spirit upon his death. However, he was not worthy of getting into heaven. When he died his soul was stranded wondering around for all eternity. Jack used an ember the devil had given him to light his way and carried it in a hollowed out turnip (Ireland did not have pumpkins) and created a lantern; hence Jack O’Lanterns.

In this version Stingy Jack decided to trick the devil not just to avoid getting into heaven but for monetary gain.

Here, Jack met the devil in a bar and managed to convince him to turn into a coin that he could use to pay his tab. But as soon as the devil transformed himself, Jack instead put the coin in his pocket which happened to be next to a silver cross. Once that happened the devil was unable to transform back. Jack kept him that way until the devil promised not to take his soul upon his death.

Jack died soon after and with God declining to let him into heaven, he was sent down to hell. But the devil kept his promise and instead forced his should to wonder the dark night forever. Jack thus took coal and a hollowed out turnip to light his way while simultaneously scaring those still living.

I happen to believe that the real story is based on a combination of these tales.

What seems to be consistent is that once the Irish started to immigrate to this country the story seems to have spread by word of mouth.

As it also happens, the festival of Samhain takes place at the end of harvest season aka Halloween. It was a time to usher in the darker half of the year when the so-called lines between this world and the next were blurred. This Celtic tradition is similar to All Saints Day and La Dia De Los Muertos aka The Day of the Dead.

Since pumpkins were native to America, they were carved instead of turnips which folks had been carving scary faces into for countless years in order to frighten away the evil spirits including Stingy Jack.

It is also believed that after the creation of The Legend of Sleepy Hollow in 1820 by Washington Irving, the idea of a Headless Horseman with a Jack O’Lantern became mainstream. The earliest written version of this phenomenon can be found as far back as 1834.

Nowadays pumpkin carving is done just for fun but I suppose if they happen to also keep Stingy Jack away than even better.

I feel the same way about the gargoyles atop many of the beautiful buildings in Europe. Though they were built to ward off evil spirits, their placement in some of the most famous architectural gems help to sodality their importance in our culture.

Today in the U.S. alone, over two billion pounds of pumpkins are produced every year.

How many of those did you carve?