For a Gathering of Like Minded People: “Pizzadelphia Pizza Festival” 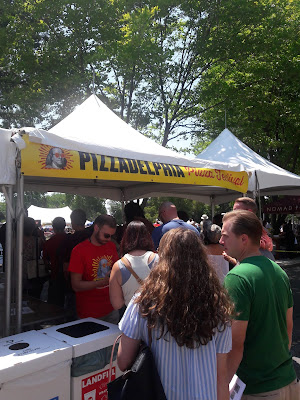 Last night I saw a commercial for Oprah’s new line of pizza and was instantly outraged. If anyone should have their own line of prepared pizzas it should be me.

I doubt Oprah has even been to a pizza festival.

The Pizzadelphia Pizza Festival caught my eye a couple of months ago and I decided I needed to attend despite my reservations about how hot it would be.

The Festival was held at the Navy Yard in Philadelphia and it was a bright and sunshiny day.

But it was also hot. Very hot, and despite my strong infinity for pizza I was semi dreading an outdoors event.

Never-the-less I forged ahead. 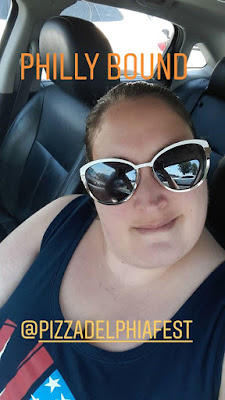 I made good time to Philly and met my first obstacle when I pulled into the parking lot at the Navy Yard. It was completely packed!!

For such a large event the parking lot did not seem at all capable of holding the amount of vehicles it would solicit. 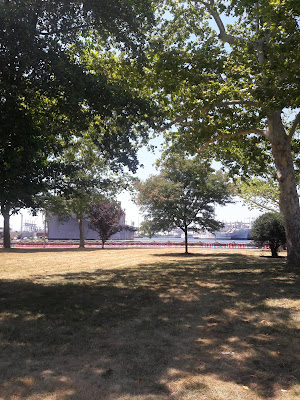 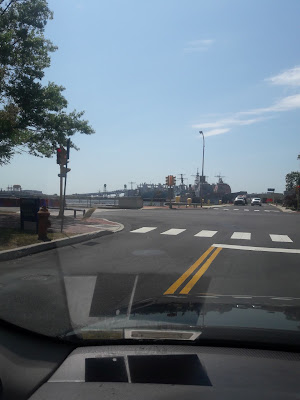 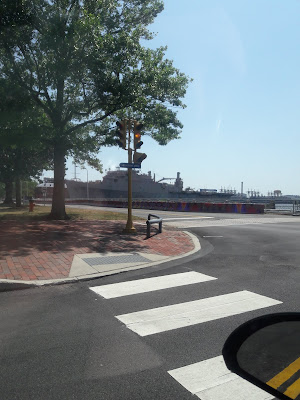 After a bit of stalking some folks who were leaving I managed to secure a spot. 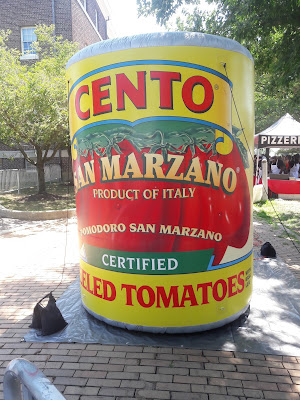 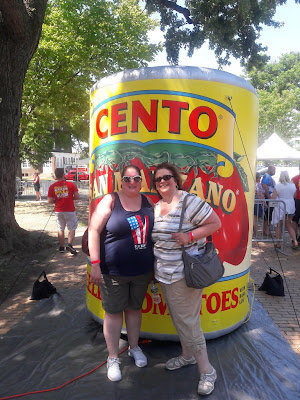 Next we walked to the head of the long line that led into the event because I couldn’t understand why there was such a line in the first place. I already had tickets so I walked right through. That was until I had to open my bag for security and was then forced to throw out my frozen Gatorade. I was pissed. I have a variety of medical issues that do not let me drink just anything and I had prepared for this visit with this in mind. I was also never informed that outside drinks would not be allowed in.

This fury would only grow once I was inside and found there was only one vendor selling water and that the water was piss warm!! On such a hot day, they had some nerve, especially since it wasn’t a particularly cheap ticket to purchase in the first place.

Speaking of which, why couldn’t this event be held in the fall?? All of those poor people working near scorching hot pizza ovens in what is essentially a large empty field in July makes no sense.

However, once I was there I was trying desperately to make the best of it.

Each pizzeria that had a stand was giving out one or two varieties. Most had incredibly long lines.

The first I got on was Tacconelli’s. 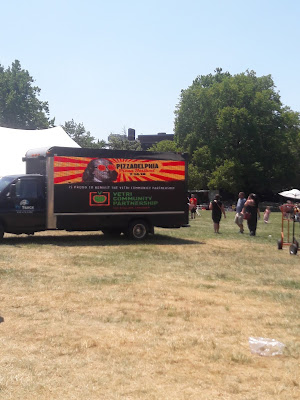 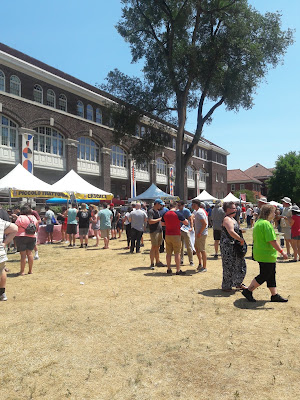 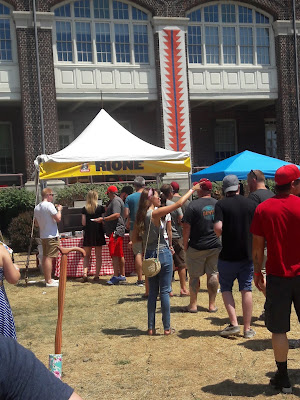 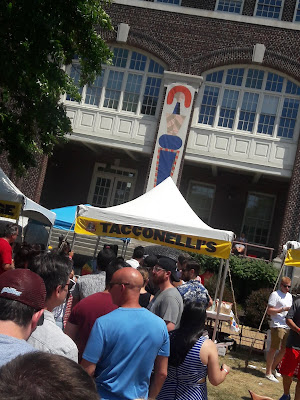 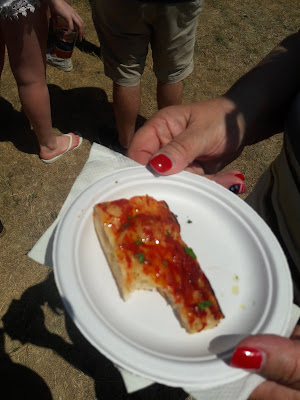 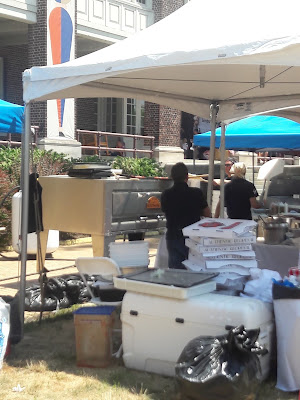 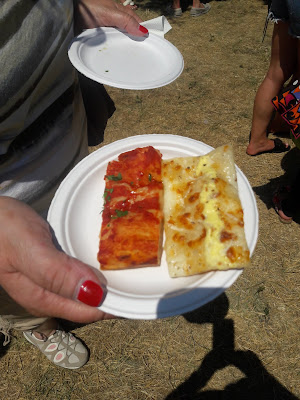 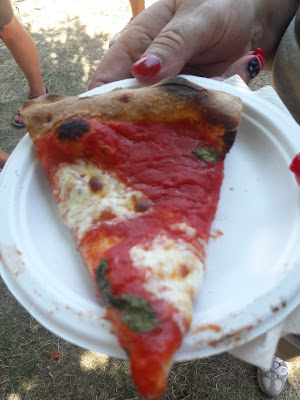 They, after all, were the driving force for me to attend in the first place. I have been trying to visit their restaurant since 2015, a place where you have to pre-reserve your pizza dough. Even during my follow up visits to Philadelphia I never seemed to be able to cross this pizza place off my to do list. It seemed easier to try their famous dish here. 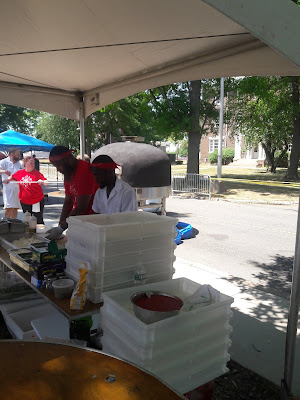 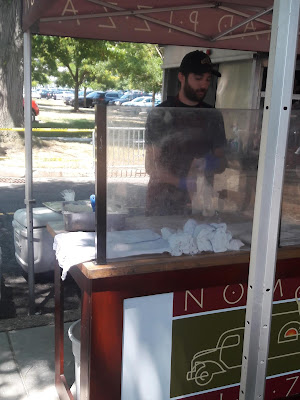 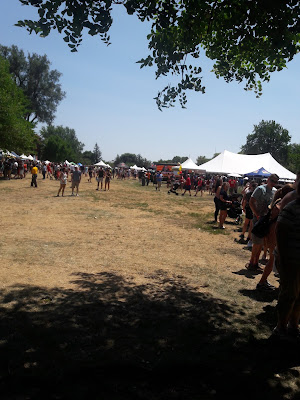 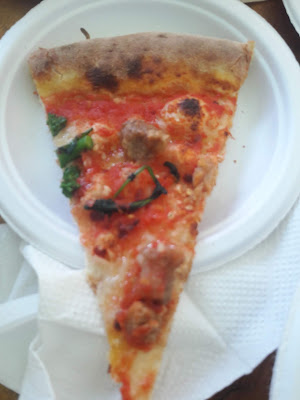 I got on the long line in the broiling hot sun and tried to patiently wait my turn. This line seemed to be taking the longest out of those around me. I couldn’t figure out why until it was my turn at the counter. The pizzas made here were small. Smaller than the purse I was carrying. They could not seem to keep up with demand. Thus, the sliver of the slice you were given was akin to the size of a communion wafer served during mass.

From what I could tell from the three bites it took to finish these pieces (they offered a Margherita and Carbonara slice), there was nothing that warranted calling ahead to put dough on hold. It was unremarkable and could have been pizza from just about anywhere in the world.

This first experience would be repeated several times over during my short stay at the festival.

Over and over again you’d wait on a long line just to get a scrap of pizza.

Then there was the more annoying problem: they all seemed to be serving only Margherita pizzas! 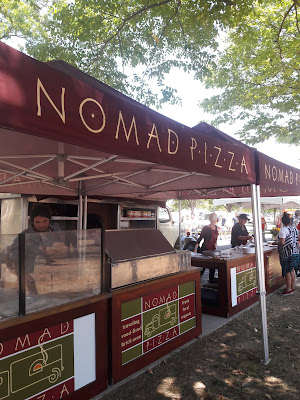 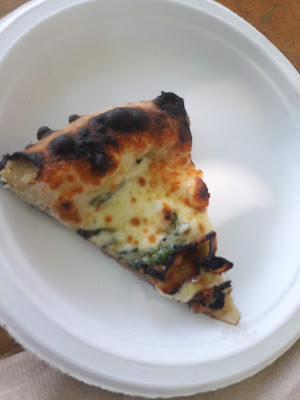 There were two exceptions that I have to note. One was a place serving vegan slices and the other was Nomad Pizza. Sure they had a Margherita slice but also one with spinach on it which at the time seemed very exciting. Plus their line was short and moved super fast.

The bonus to having spent some serious time in Philadelphia before is that my experience in 2016 Reading Market did teach me one thing; when you see a sign for Bassetts Ice Cream you run towards it!!

And that is exactly what I did and how I ended my visit to Pizzadelphia Pizza Festival. Conveniently it was right near the entrance/exit. Though a cone was not included with the ticket price, the strawberry waffle cone I had was worth every penny! There was a chunk of fresh strawberry down to the last bite of cone. I am positive now this is my very favorite ice cream of all time and worth the one and a half hour drive to Philadelphia. 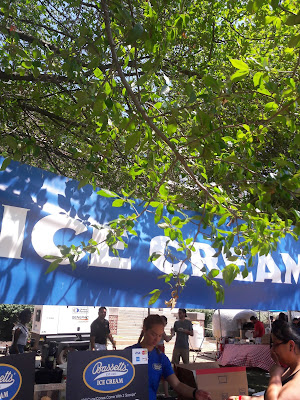 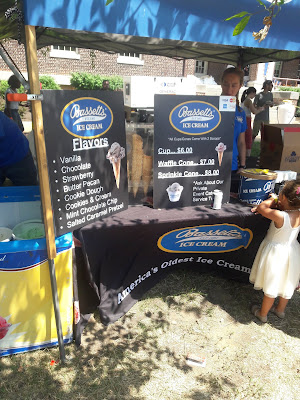 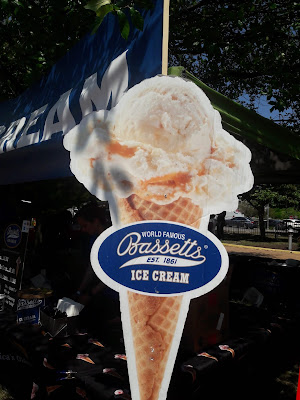 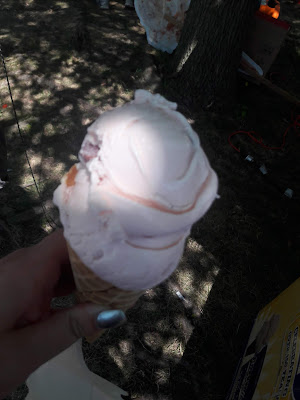 Pizza Festival be damned. On that hot afternoon it was all about the ice cream. And there is none better than Bassetts.

The good news is that there is only thirty minutes until yet another #PizzaFriday is upon us.

So lets all go out there and make it a damn good one!