For Find Out Friday: What Exactly is Lester Holt’s Role at Dateline? 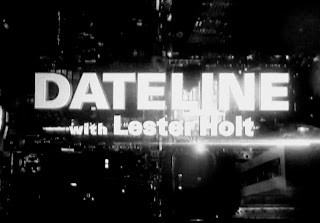 I am a BIG Dateline fan.

So huge in fact that I ignore their disclaimer and do indeed “watch alone”.

I am into it not only for the true crime mysteries but I find that it offers some very practical advise. I often believe if more people watched Dateline and programs on ID Discovery some of the tragic events in their lives could be avoided.

For instance I would never, ever, under any circumstances leave my door unlocked, trust a stranger, or marry someone without a complete background check.

Now since I watch so much Dateline I know how the story goes. It always seems to begin with Lester Holt telling me the premise of the plot and then I hold my breathe and pray that the host that night is Keith Morrison a.k.a. God of NBC. His soothing voice puts me to sleep many evenings but not because he is boring. He just relaxes me and naturally is a hell of a storyteller.

But back to Lester.

I have come to find myself getting more and more annoyed and confused by his role. Sure he says a few sentences in the beginning and after certain commercial breaks, but he isn’t actually telling me anything. He didn’t go out on assignment or interview those involved.

So why the hell are some of the shows called “Dateline with Lester Holt”?

And what I mean by this is of course, how the hell do I steal his job?

Lester Holt is a renowned journalist and has been the actor of NBC Nightly News since 2015. He is the first African American to anchor a weekday newscast on his own.

No doubt this is a grand accomplishment. Kudos to him.

But back to Dateline.

Does he realllllly need to “anchor” it? And is that what he is doing?

If so anchoring is a job I think I could excel at.

This also makes me wonder what his paycheck from Dateline looks like.

As of 2015 Holt was earning approximately five million dollars for his Nightly News gig alone making his current net worth about twelve million. Not too shabby.

Lester Holt took over as anchor on Dateline in 2006, taking the baton from Ann Curry who held the job from 2005.

Dateline itself has been around in one format or another since 1992, telling human interest and true crime stories. They were one of the first shows to focus on telling one story per episode.

Since there is a lack of specific information on Lester Holt’s exact role as an anchor for Dateline, I simply Googled the word anchor to see what the description would be.

This is what I found out:

“A news anchor presents news stories on radio and television news broadcasts. He or she introduces reporters' videotaped and live reports, analyzes and selects stories, and interviews guests. News anchors are usually required to have a presence on social media.”

Ok so maybe I have been too hard on this man. Apparently a lot of work goes on behind the scenes but still seems like a pretty sweet deal to me.

In a separate but interesting note for all my fellow true crime devotees; have you heard about Crime Con?

It is an annual event that changes location each year, and celebrates all things we as fans love. I mention this now because it features appearances by those who work on the shows we binge watch such as Dateline.

I have finally purchased tickets for Crime Con 2019 which will take place in New Orleans!! New Orleans is a place that speaks to me on so many levels (https://bit.ly/2vDb24Q) so I took it as a sign that the very next Crime Con will be held there.

I greatly suggest you check out the link below for all of the details. I hope to see you there.

As for me, I have to get ready for Dateline Friday.