For Find Out Friday - What Are the Rules for Billboards? 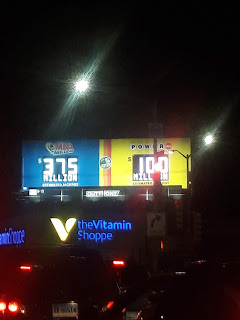 As you may know, I get my inspiration for this blog based on what I am doing in my life.

A while back I watched “Three Billboards Outside Ebbing, Missouri”, without much fanfare. I had high hopes for this drama that tells the story of Mildred Hayes, played by Frances McDormand, who puts up - you guessed it - three billboards in her small town as a way to find out who murdered her daughter. She is a fierce mama bear trying to solve a crime that everyone else would rather put behind them.

When the trailers for this movie first came out I was immediately intrigued. Sure I love a good whodunnit but this movie takes its origins from real life. That is, it is based on a true story (https://bit.ly/2MZhKJ1), my very favorite kind of film.

The 1991 murder of Texas native, thirty-four year old Kathy Page, a mother of two. She had been found in her car one hundred yards from her home in a scene that seemed staged. She had been strangled. The main suspect was her husband, Steve Page with whom she had just separated.

Despite several attempts to indict him, grand juries failed to due so. However, he was found responsible for her death in civil court and Page’s family was awarded one hundred and fifty-thousand dollars as a result.

Kathy Page’s father, James Fulton could not bear the tragedy of his daughter’s death and her unsolved murder. Since the time of her death, and even to this day, he continues to put up billboards seeking justice. Her father has spent over two hundred thousand dollars on these billboards.

One of the more bold billboards read: “Steve Page Brutally Murdered his Wife in 1991”.

While the movie failed to make any positive impressions on me and the ending was one of the stupidest in history, it had me thinking about what if any laws or restrictions there are on billboard signs.

Billboard signs, like many other similar building guidelines, vary from state to state. Most of them regard size not content. When it comes to digital signs, there are regulations depicting how fast and often it can blink, how bright the lights are, and other safety related topics.

Likewise, price will also differ from one locale to another.

For example in Times Square in New York City it can run you anywhere from one million to four million a year for a billboard that is digital.

While in Boston, Massachusetts it costs above eleven to twenty-three thousand dollars for a month’s time.

As for what the billboard is allowed to contain, it depends on the location, mostly, whether its on a desolate road in a small town or a main highway. This is more than about free speech it is also about the beauty of the highway system.

As per the New York State Department of Transportation:

“In 1965, the Congress of the United States passes the Highway Beautification Act which controlled the erection of new signs and the continuance of existing signs along the National Interstate Highway System and Primary Highway System……to protect the public investment in the highways, to promote the safety and recreational value of public travel, and to preserve the natural beauty of America's highways………Congress provided for the appropriation of funds to assist the states in the removal of non-conforming signs.

To promote safety on our State's highways, DOT's Division of Traffic and Safety assists in determining permissible locations for signs. The placement of a sign cannot interfere with the efficient and safe flow of traffic, nor interfere with any official traffic sign, signal, or device.”

As long as there is no profanity, nudity, pornography, obscenity, or other out right offense, language does not appear to be controlled. After all that is what our First Amendment is best at.

Now, every time I pass a billboard I stop to think how much good those giant signs in the sky could be doing.