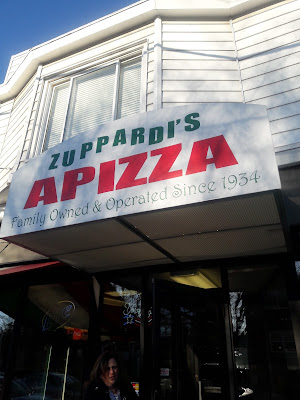 Zuppardi’s Apizza ranked number five on Eater’s list and it was our next stop, so its your’s too.

Once again Frank Pinello and The Pizza Show are behind this find and I couldn’t be more grateful.

While I enjoyed my time at Modern Apizza, Zuppardi’s is a place I feel like I have been visiting my entire life. By the end of my visit I felt like the waitress was my new best friend and I could see the love her family has been putting into their family owned and operated restaurant since it was only a bakery back in 1932. 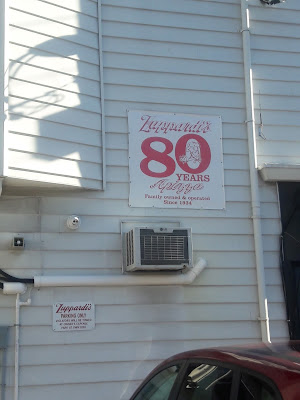 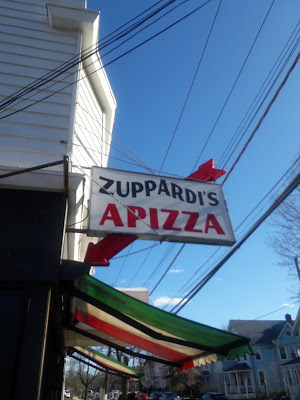 After eight years of success the original Zuppardi, Dominic, handed over the reigns to his son Anthony who took the popularity of the bakery’s pizza and ran with it. It is now in the hands of his children and grandchildren who continue to make their pizzas with the passion that is in their blood.

The restaurant had no line when I pulled up and I was relieved but puzzled. If Frank Pinello came here than I knew this place was going to be amazing. But how come no one else was hungry? I now believe that it was the odd time of day that accounted for the good luck of having the place mostly to ourselves, just the way I liked it. 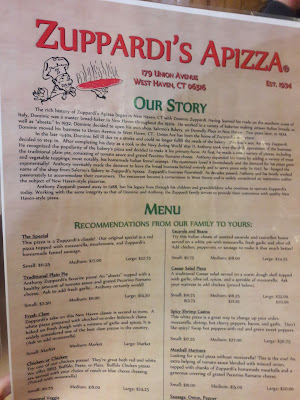 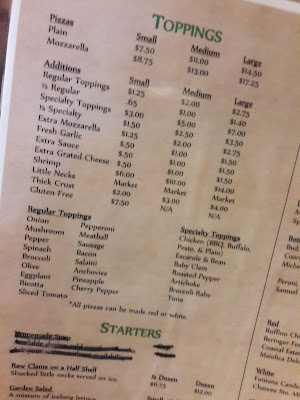 It was late afternoon and by the time we were teetering out it was starting to get more crowded as the early bird diners were arriving for their piece of apizza.

Since I had originally planned to hit up Sally’s Apizza afterward, and had a Margherita pizza right before at Modern Apizza, I wanted something different. I wanted a topping not common place in my neighborhood in Brooklyn. Something that made me sit up and notice I was in New Haven having apizza! 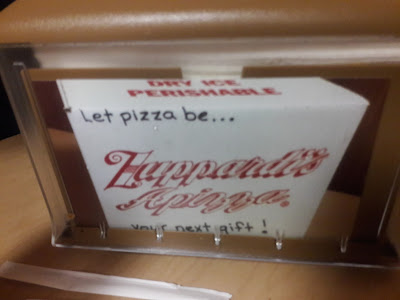 This turned out to be harder than I first thought. We were a party of four with four different tastes and prerequisites for what we wanted to eat. It was becoming a struggle and I was getting overwhelmed. 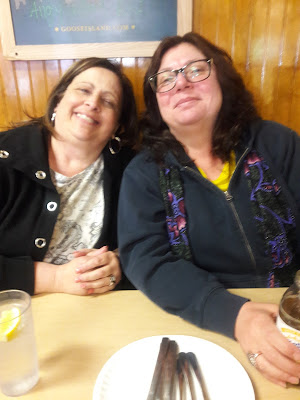 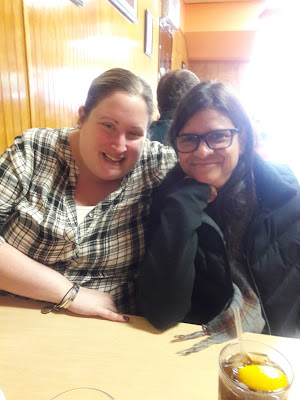 Then by the grace of God and my waitress, she pointed out that I could get one pie with as many different kinds of slices as I wanted. It was like she had the voice of an angel. In my town that wouldn’t fly without extreme surcharges if they would even do it. Her generosity in this area would not go unappreciated.

With that confusion done we got a pie with regular slices, and some topped with eggplant, and buffalo chicken. I had originally ordered BBQ chicken but buffalo chicken came instead. I was about to say that it was fine but they were already preparing an entire BBQ chicken pizza for me to sample to make up for this slight mishap. 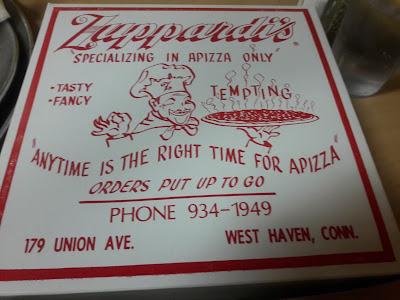 Did I mention how much I loved my waitress??!

I guess it is a good thing I never got to eat at Sally’s Apizza. After Zuppardi’s we had continued on to our third and final stop of the day. But when we pulled up we were thrown a curveball. THEY WERE CLOSED! 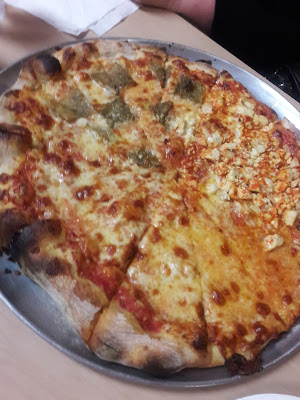 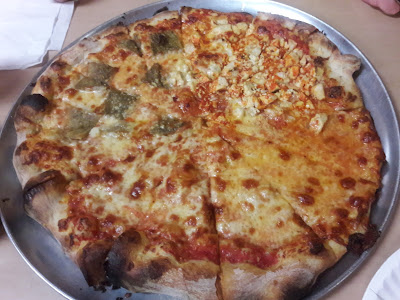 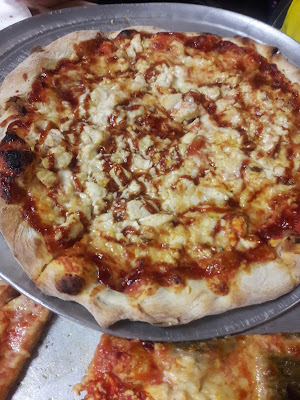 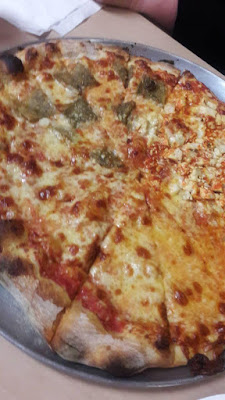 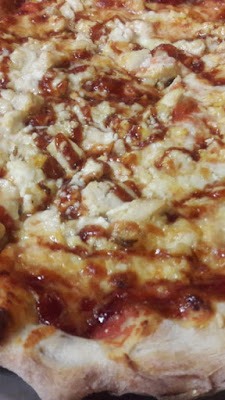 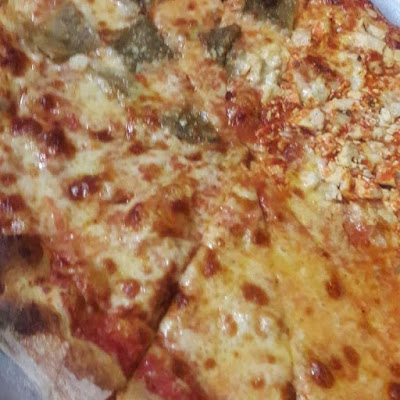 There was a sign hanging in the window that was handwritten saying they were off until Wednesday. This was Saturday. I had checked their website numerous times and even called but no one answered. The website gave no indication of this status and I was pissed. Actually I was more than pissed and the words I used in the car to describe my feelings are even too harsh for me to share here.

I hate when people don’t consider your time important or make simple adjustments to accommodate their customers, no matter how great their establishment allegedly is. I made my feelings known on their Facebook page.

My cousin pointed out that we could always come back but at that moment I was too annoyed to considerate it. However now that have I calmed down and found other New Haven Apizza haunts I want to check out, they might get a second chance. I hope for their sake they don’t mess it up. But that is really a conversation for my upcoming annual to do list post.

Back to my happy place; Zuppardi’s.

It was time for my taste test.

I almost didn’t know where to begin. I went with the eggplant first and that was so incredible! Eggplant is like fish to me. When I haven’t had it at a particular location before I am always hesitant. I don’t know if the eggplant will have the skin on it or if it will be bitter. With fish I worry it will be fishy in taste.

The eggplant on this pizza was delicious! No skin, perfectly cooked, and cut up into small bites.

Next I went for the buffalo chicken. Although I hadn’t actually ordered it, I was thinking about trying it. I love buffalo seasoning but it does not usually love me. This slice was also really good and ate an entire one while sitting here. Despite the heat I kept picking off the pieces of chicken because they were that good and not soaked in sauce.

Next up was the BBQ chicken. That was my favorite!!! That sauce was so unbelievable that I would have loved it on the eggplant slice thus creating the perfect slice. But I left some fun for next time.

I would later eat a couple more slices of this pie, cold, on the way home in the car, and even then I still loved it.

It appears that while Modern Apizza is good; Zuppardi’s Apizza is really where its at for me.

The casual, comfortable environment, combined with high quality food really made this the winner for the day. I plan to become a regular despite the considerable distance from my house.