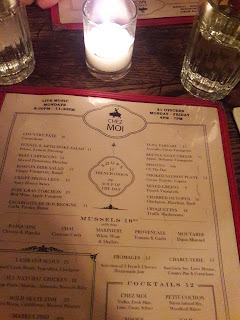 As anyone who read my last blog knows, this beloved work of mine just turned seven. And what is a birthday without a celebration?

For this occasion I selected a place I have long wanted to return to for a proper meal. I first came upon this location when I celebrated my thirty-fifth birthday in 2016. At that time I went to Le Boudoir (http://bit.ly/2s3kttO), a Marie Antoinette inspired bar. Needless to say my love of all things French and historical was perfectly combined in this location for my birthday party.

At that time my friends and I ordered several items from the menu of the restaurant upstairs, Chez Moi, and that is when I made a mental promise to myself to return and have a meal there. Though not officially on my annual to do list (http://bit.ly/2s4Ydji), Chez Moi never left my thoughts. Thus I had to make it a reality and what better time than now.

Chez Moi opened in April 2012. This restaurant models itself after a French bistro. I am always on the lookout for another great French bistro. French food is one that I find very comforting and very delicious when done properly. I am partial to French onion soup, steak with frites, and creme brûlée. Last Saturday that is exactly what I ordered.

I was with my mother as well as another mother and her daughter. Our foursome is the same group that rewatched Dallas from season one all the way through its untimely end on TNT. Saturday nights have traditionally been our night to gossip, drink, play cards, and occasionally go out to eat. Typically I pick the restaurant as I did this time. 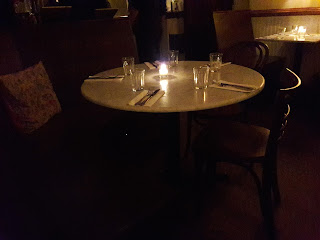 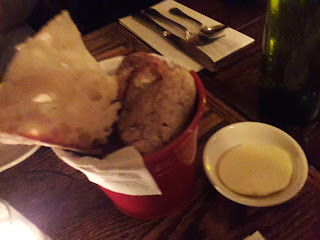 All four of us ordered the same appetizer and entree. Most of us were pleased. 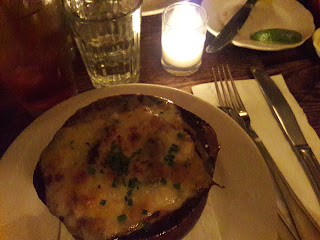 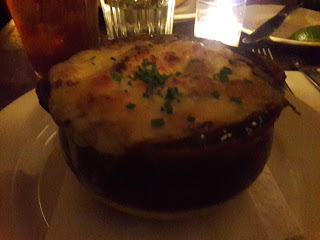 I found that the French onion soup was a bit sweeter than I am use to. When I cook this at home I use Julia Child’s recipe. I figure here the wine they used and maybe even the onions were what was causing the flavor to be sweeter than I am used to. I didn’t mind it. In fact, I ate every last bite which took me having to push my steak to the side for a few minutes until I completed this task. 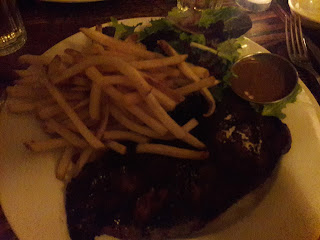 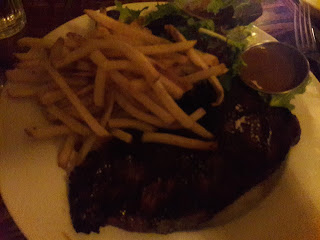 As for the steak I found that there was too much fat on the outside. It took a great effort to cut through it in order to even taste my steak. I suppose I could have used a sharper knife.

Aside from that minor obstacle, the flavor was enjoyable. It was also a substantial portion. I couldn’t have eaten it all in one sitting after having an appetizer and appetizers are always a nice way to start a meal.

The only other part of my entree I wasn’t fond of was peppercorn sauce they served on the side. It was too spicy and not my first choice when it comes to sauces. 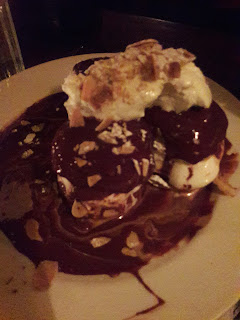 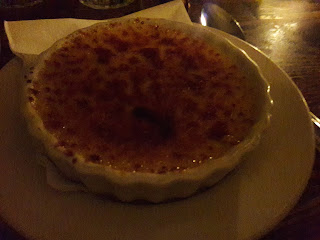 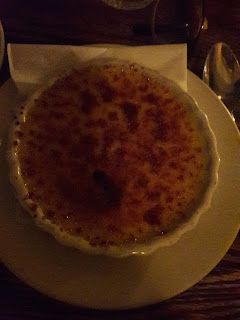 When it came to dessert, there was three creme brûlées and one order of profiteroles. Profiteroles are a new dessert for me. My friend who ordered them had made a bunch over the holiday season and brought them over to me. They were pistachio on the inside with a dab of chocolate on the top. They were very yummy.

However the ones served at Chez Moi were not what I expected at all. They were swimming in chocolate topping, and there were several pieces of chocolate puff pastry sandwiched with vanilla ice cream. There were almonds sprinkled all over the dish. It looked like a big mess.

Since I do not care for chocolate I did not taste it but those who did weren’t very impressed. I wasn’t either. I prefer the dry, easily delectable version I had tried. Apparently that was the consensus.

The good news was that the creme brûlée I had was just as good as I remembered, having had it earlier at Le Boudoir. It was a decent size, with delicious cream, and the sugar glazed on by fire that the dish is know for. I loved it so but I was way too stuffed to finish. The small amount I left on my plate was a shock to me. It has never happened before. 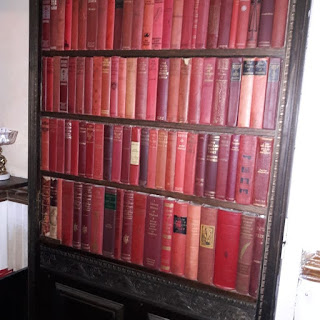 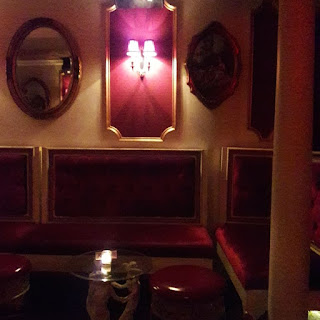 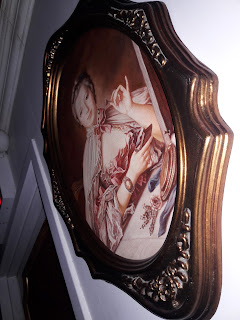 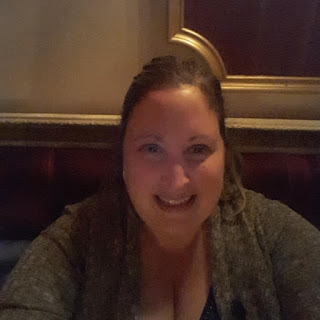 Next we were onto the second high point our evening: sliding behind the obvious but secret door that leads downstairs to Le Boudoir. The fake bookcase that hides the stairs reminded me of a poor man’s version of the one I saw at Anne Frank’s house. Had this been what they had, the Nazi’s would have found them on day one.

Besides trying the food at Chez Moi I wanted to show my mom how cool the bar just below was. She had heard all about my birthday of course and I thought it would be a great place for the four of us to have a drink. If you read my blog about that night you will know I didn’t enter this way the first time around. This was much more exciting.

I had another great dirty martini and we chatted for a bit. I still loved the atmosphere and still seek to have a similar special place for myself within my own home someday.

Just like Paris itself, going out for an evening of French fun is always a good idea.

Both Audrey Hepburn and I can’t be wrong.