For the Lookie Loos at “Lucali” 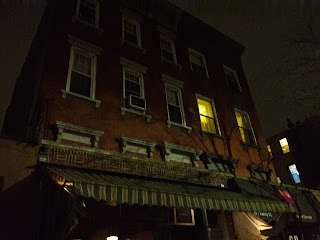 Every once and a while there comes a place where anyone who is anyone can be seen in. Normally I do not care about such places but when it involves pizza that is a whole different story. 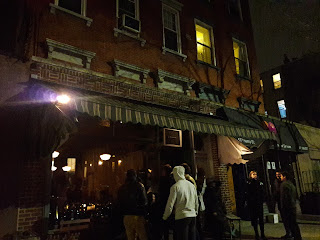 I love pizza. Like really love pizza. I would marry it if I could. If you are on my blog and search “pizza” there will be enough posts for you to read this entire weekend. I love it that much. I also devote a small portion of my life to trying the best of the best. You’ll note by most recent pizza joint essay is less than a week old (http://bit.ly/2IaPhy2). 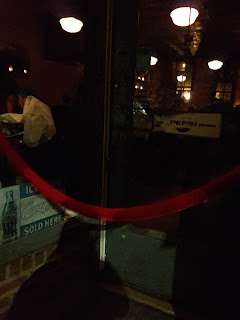 Thus, famous people aside, I had to try what they were serving up at Lucali. Plus it was on my annual to do list (http://bit.ly/2s4Ydji).

As I was leaving my dinner at Chez Moi (see last blog) I realized I was only down the block from this famed pizza haven. I was reminded of its popularity when I saw Chrissy Teigen’s Insta-Story that week where her hubby John Legend was tossing around some dough there. 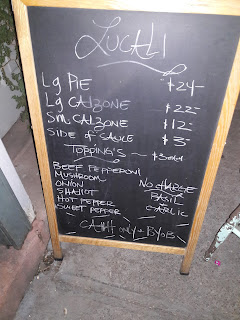 I knew I was at the right address because Google Maps told me so. It was also the only place on the very residential block that had foot traffic. There is no identifying sign or address on the building. Despite the very dim lighting inside, I could tell it was packed. Of course Lucali is too cool to take reservations or even answer their telephone if you try to call.

There was a small crowd of folks calmly hanging out, outside. I saw a few people eating pizza in their cars. As I got closer I noticed a red velvet rope. I shit you not. All of a sudden I was at Studio 54 in the height of their fame in the 1970s. I thought Liza Minnelli was about to come out of the door. 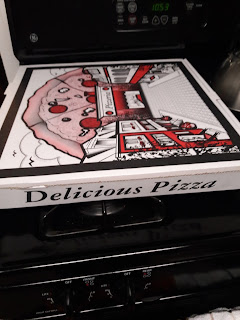 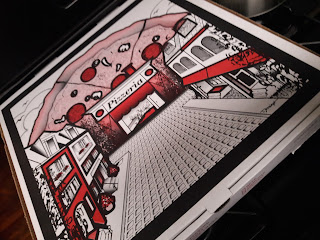 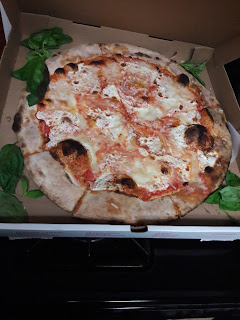 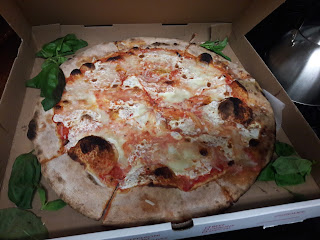 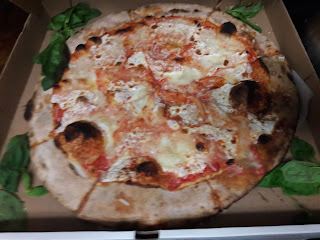 Instead a very polite and petite woman asked if she could help. Since I had no hope of getting in and no desire to eat another meal at that moment, I asked if I could take out a pie to go. She said sure. It took about ten minutes and I had to pay in cash. It was like a drug deal, but one that nearly everyone wants to be apart of.

I know Bey and Jay had visited long ago. Now, Chrissy and John. Next on the list had to be me. I count this as a visit even though I never technically went in.

Lucali only serves pizza and calzones but I have heard if you happen to get in you might be served a tossed salad that will transform you. That is the word on the street. I was satisfied just to get my pizza and be on my merry way.

Much later on that night I decided to sample the goods. It was a typical thin style pizza, adorably decorated with basil all around the box.

Upon appearances it reminded me a good deal of Roberta’s (http://bit.ly/2FupK0W), another incredibly hot spot. But at least I got in their once. In full disclosure I also ate some in my car one other time.

But that is where the similarities end.

Lucali does not do Roberta’s fresh or their frozen pies I bought in the supermarket, any justice. I will go even further than that and say that it might be the worst pizza I have had in recent memory. My English muffin version is New York Times worthy by comparison.

After doing some research I know why.

Owner Mark Iacono opened this restaurant on a whim, in a space that use to house a candy store while he was growing up in the neighborhood. That explains the decor outside.

Having never made professional pizza prior to this venture I suppose he has been successful. Why this restaurant in particular has gotten SOOOO much positive press is besides me. Especially in a place like Brooklyn when we should know better and have so many other places to cherish.

Closer to my house is one such pizzeria that lives up to its hype; Di Fara (http://bit.ly/2FrG82i). My research showed this is where Mark Iacono got the idea for sprinkling basil all around his finished pie. In truth Dom, the man behind Di Fara, is the only person I know to do that. Now I am annoyed his signature was stolen by someone unworthy.

Lucali’s pizza looks delicious but has no flavor. The sauce and cheese stop half way before reaching the crust. The crust itself is impossible to chew without fearing the loss of a tooth. The more bites I took the more confused I was. Not because I didn’t agree with the general public. I am used to having my own specified tastes in food and entertainment, which almost never matches up with the masses. But because my eyes were deceiving me. How could it look so good but be so unsatisfying?

I still don’t know the answer.

But perhaps that is why Lucali still considers itself officially unopened.

The Carters and the Legends need to hang out with me more. I have so much to teach them about pizza.