For Find Out Friday - How Honest is Your Iced Tea? 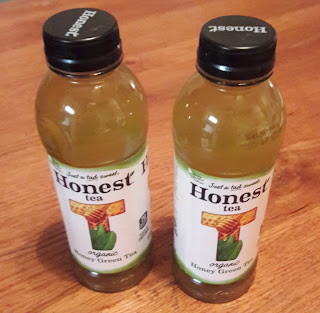 I am a thirsty girl, in the traditional sense.

No, I do not have diabetes as my mother frequently asks me. I am, however, on several preventative medications for my chronic migraine illness which certainly does not help.

I always have a water in my bag and probably a coffee in my hand. This is true. No matter where you may see me: in a grocery store, at a baby shower, or even on a trolley car in San Francisco, this is no doubt how you will find me. FYI - you need two hands to hold on for dear life in that last situation as I learned the hard way.

I have tried my share of beverages that will keep me hydrated when I am sick of drinking water. Many iced teas contain an alarming amount of sodium which of course isn’t good for anyone, but especially not for someone who gets migraines.

Honest Tea is my favorite drink of all time. I LIVE for their honey green tea. Whenever I feel lightheaded, dehydrated, or just plain thirsty, I turn to Honest Tea as much as possible. In fact I just bought a few more bottles in the store today as you can see from my photo above.

My path to Honest Tea was completely accidental. A couple of years ago I was working in an office and was contemplating trying out a new deli for lunch. The only iced tea they sold was Honest Tea so I gave it a chance. I was instantly addicted. Our love affair has only grown in the time since that first meeting.

So today in honor of my favorite beverage (outside of a latte) I decided to investigate the story behind Honest Tea. What I found out made me love this company even more.

Honest Tea was founded in 1998 by Seth Goldman and Barry Nalebuff (Goldman’s business school professor), honestly and humbly out of Goldman’s kitchen. These men had tossed the idea around for a couple of years when Goldman up and quit his job in the financial arena. At that time he was married and had three kids.

After brewing tea for many, many months they had a recipe they were ready to share. Using thermos and rinsed out Snapple bottles (https://bit.ly/2I2kAdF) they snagged their first client; Whole Foods (https://bit.ly/2t0tLII) - another great start up I am a fan of. That first order was for fifteen thousand bottles.

The main goal of creating Honest Tea was to have a product on the market that had very little artificial sweeteners but a satisfying taste.

Here are some of the important moments in the company’s journey to success:

Honest Tea is about more than just a great product, using only Fair Trade ingredients. It was always important, especially to Seth Goldman, that the company was philanthropically responsible. Just like Starbucks, as I mentioned before I do love a good latte.

In an interview with CNBC, Seth Goldman said something that resonated greatly with me:

“Being a successful entrepreneur isn't about being lucky, it's about being persistent. It's so important to be able to bounce back from something, all the time, but in life and especially when you believe in it."

The story of I have shared today is a great source of inspiration for me. As an entrepreneur myself, I love and connect with stories of those who bravely set out to make a new path for themselves. I so admire that amount of ambition and drive. i aspire to be the answer to someone else’s Find Out Friday in the near future.