For Find Out Friday Week 47 - Do Employees Really Have to Wash Their Hands? 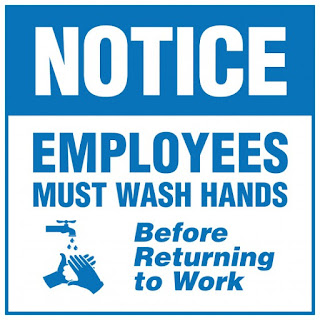 Every time I see a sign requiring them to do so I always want to know why it is there in the first place. I feel like that should be an unspoken automatic action we as humans do. Sure it would be gross if employees, especially, didn't wash their hands after using the facilities, but what compels the restaurants to hang a sign reminding them to do so? Or rather what law requires that the sign be posted at all?

I cannot seem to remember a time I didn't see this sign in every public restroom I have been in. Some public restrooms are so scary I am made to wonder if washing your hands there does more harm than good. But that puzzling question aside, how long has this restaurant regulation been in existence?

The Food and Drug Administration (FDA) maintains The Food Code that establishes guidelines for nationwide governments to use as a health standard in regards to all food related issues. Things like ground beef, listeria prevention, to even, yes, wanting your employees to wash their hands after using the facilities before returning to their work station. These guidelines were first established in 1993 and as of 2013 an updated Food Code is published every four years.

According to the FDA:

“The Food Code provides practical, science-based guidance and manageable, enforceable provisions for mitigating risk factors known to cause food-borne illness. The Code is a reference document for regulatory agencies that ensure food safety in food service establishments, retail food stores, other food establishments at the retail level, and institutions, such as nursing homes and child care centers.”

The next version of The Food Code will be released later this year.

Since I live and predominantly eat in NYC and it’s surrounding boroughs that is the jurisdiction I focused my research on.

In New York City, it is the State of New York that regulates all matters of health, specifically the New York State Department of Health’s Bureau of Community Environmental Health and Food Protection. This division oversees all food service establishments which rounds out at about ninety-thousand facilities. 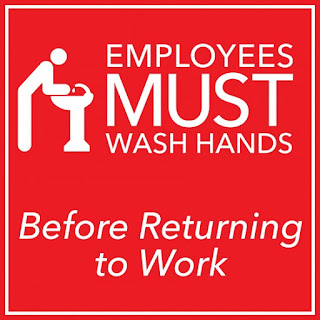 Within the parameters of the State regulations, New York City itself organizes the New York Codes, Rules and Regulations (NYCRR). The NYCRR has 23 Titles in all but Title 10 is the Health Title. The Health Title, specifically Section 14-5.143 dates back to February 22, 1985 and reads “handwashing signs are to be posted at all handwashing facilities.”

Furthermore the NYS Department of Health’s, Health & Safety Part 14, as of January 8, 1997 cautions “handwashing signs are to be posted at all employee handwashing facilities.” The added word here being “employee” makes all the difference from the above City regulation.

You would think that just insisting that restaurants have to post a sign reminding employees have to wash their hands is enough. Not so. Each state has their own restrictions within that parameter. The signs you see in this post are all approved for NYC use. 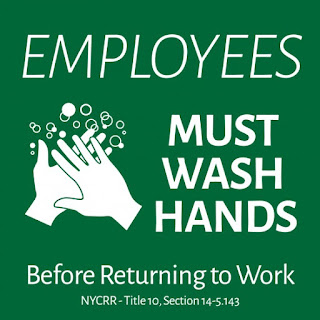 In NYC, the following are the mandates for the facilities that go along with the posted sign:
In a way it is sort of sad that the laws have to be this specific, that common decency isn't enough. However I still wish there were away to ensure everyone was following the rule. It is unpleasant to think about it but you know it had already occurred to you too. 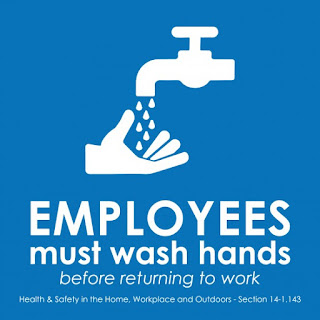 The latest restaurant regulations regarding such matters as health within the food industry came in 2010. That year the City instituted a new grading system which placed a letter value (A, B, or C) in the window of the establishment after a health inspection. The letter the restaurant received signaled to the outside food consuming population how seriously and close that place was in line with regulations. Regulations that were in place to keep those same people safe. It is a literal sign to those choosing to eat there how well the restaurant is performing when it comes to preventing food related illnesses.

After considering the alternatives, I am glad that this is our norm. I just wish the sign had to read: “ALL MUST WASH HANDS”.