For Find Out Friday Week 46 - Did Any Good Come From the "Son of Sam"? 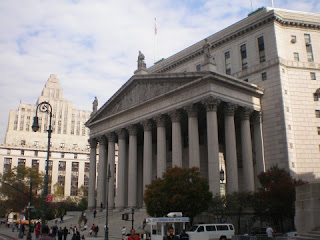 The “Son of Sam” is the self appointed name given to murderer David Berkowitz, who terrorized NYC beginning during the summer of 1976. His nickname refers to a dog (real name was Harvey), a black Labrador retriever belonging to his neighbor Sam Carr.

Prior to that he was known as the Forty-Four Caliber Killer by the police tasked with finding him. He sent many letters to the police taunting them about the murders and ones to come.

We all now know that Berkowitz claimed he was receiving his orders to kill from the Sam Carr’s dog. Not surprisingly, after his arrest he was diagnosed as suffering from Schizophrenia.

Due to the similar appearance of many of his victims, Berkowitz seemed to have an affinity for young women with long brown hair often found parking in lovers lanes with their dates. His murder spree included the killing of six women and wounding several others including some of the males they were with at the time of their attacks.

A seemingly innocent parking ticket led to Berkowitz’s capture and arrest on August 10, 1977. He was charged with eight shootings and eventually pled guilty to the six murders. He was given six twenty-five to life sentences, the maximum penalty allowed. He is currently serving his sentence at Sullivan Correctional Facility in New York State. Although he has been up for parole for fifteen times since becoming eligible in 2002, it has continued to be denied. Berkowitz has not participated in any of those hearings on his own behalf.

I pray this is a trend that will remain intact for the rest of this serial murderer’s life.

While in jail Berkowitz has been quite busy. He has become a so-called Jew for Jesus and claims to have been reformed. He now would like to be known as the “Son of Hope”. But I doubt that will catch on any time soon.

David Berkowitz and his crimes had a far reaching impact on society at large, even after he was jailed. In 1977 he was offered several book deals by publishers to tell his story. Out of concern that one of these would happen New York State adopted the “Son of Sam” law. It stated that no criminal had the right to profit from the telling the horrible tales that had made them famous.

Although it had been rarely invoked since its creation, there are a few notorious cases where it has been applied. Examples are Jean Harris who murdered her lover Dr. Herman Tarnower; the man behind the “Scarsdale Diet”, as well as Mark David Chapman who killed John Lennon.

Up until now I thought the original law remained in tact. I know there are a lot of true crime “fans” out there who like to collect personal belongings from tragedies inflicted by the murderers we all now by name. There are even groupies sending these psychopaths endless amounts of fan mail, including marriage proposals. That is how the Menendez brothers ending finding their wives from behind their jail cells. Turns out Match Dot Com isn't the only way to find your soul mate.

However the “Son of Sam” law eventually was challenged in a court case that made it all the way to the supreme court of the land; Simon & Schuster v. Members of the New York Crime Victims Board.

It all began when “Wiseguy: Life in a Mafia Family” was published in 1986. You might know it better by its movie title: “Goodfellas”. Author Nicholas Pileggi told the story of Henry Hill and his day-to-day life as a member of the Lucchese crime family.

Once the New York Crime Victims Board found out about it they immediately sought to obtain all profits and redistribute them the to victims of Henry Hill’s crimes. But as you can imagine the author and his publishing company, Simon & Schuster, had a problem with that. They argued that the “Son of Sam” law violated the First Amendment rights of Henry Hill.

Lawsuits began in 1987 and by 1991 it had reached the U.S. Supreme Court. There were eight justices on the bench at that time and the vote was unanimous; the New York “Son of Sam” law was unconstitutional by virtue that it was over broad.

“the Government’s power to impose content-based financial disincentives on speech, surely does not vary with the identity of the speaker. The Court further stated that the law was “significantly overinclusive” and the statute’s broad definition of a “person convicted of a crime” would allow the crime victims board to take monies from any author who admitted to committing a crime, regardless of whether that author was ever accused or convicted.”

Dr. Martin Luther King Jr. and Malcom X are two authors whose books would haven never been published under this law.

A similar case was brought by Frank Sinatra Jr. and against his former kidnapper who planned to publish that story. This case made its way to the Supreme Court of California. The verdict there was the same as in New York and this story was made its way into a book and then a movie. California had to rewrite its version of the law.

The Supreme Court ruling forced New York State to rewrite its law as well. That work began right away in 1992. Sadly the revision wasn't finalized and passed until 2001.

“that victims of crimes be notified whenever a person convicted of a crime receives $10,000 (US) or more—from virtually any source.The law then attaches a springing statute of limitations, giving victims an extended period of time to sue the perpetrator of the crime in civil court for their crimes.This law also authorizes a state agency, the Crime Victims' Board, to act on the victims' behalf in some limited circumstances.”

To date there have been no challenges to this current version of New York State’s “Son of Sam” law.

About forty states as well as the Federal government now have versions of “Son of Sam” laws prohibiting criminals from benefiting financially from their illegal acts which brought them infamy.

The strangest part of this story is that the “Son of Sam” law was never applied to David Berkowitz himself. In 2006 he wrote his memoirs with the help of a church ministry and received no payment.

But in 2005 Berkowitz brought a lawsuit against his former lawyer, Hugo Harmatz, for the use of letters, photographs and other personal possessions taken while representing him which was then used to publish his own book; “Dear David”.

Berkowitz and Harmatz ended up settling out of court. The deal required Harmatz return the stolen items and donate his profits to the New York State Crime Victims Board.