For Life, When in Newport: “La Forge Casino and Restaurant” 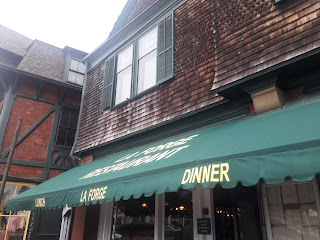 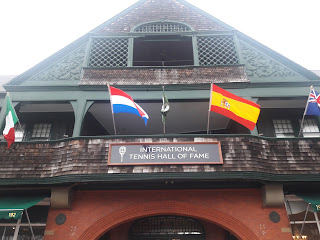 Now for the delicious part of my trip: the food!! First up was a return to one of my most favorite locations in Newport; La Forge. Not only is the name French, which appeals to the Paris devotee in me, it also has some of the best food in town. Although I have been here numerous times, it was this most recent visit that has been my most favorite.

I have never had a bad meal here nor have I had the same thing twice. The menu is expansive including specialities of the day. 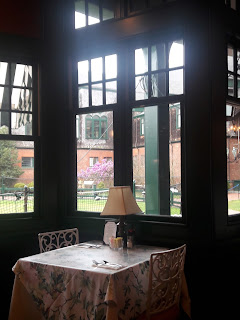 My first visit here coincided with my first taste of a New England classic, the lobster roll (http://bit.ly/2q8Pmgi). I still believe this is the best one I have had thus far even though I don’t believe it is the best thing I have ever had at La Forge.
However, that is not to say the lobster roll was not good. In fact quite the opposite is true.

I have thoroughly enjoyed their cheeseburgers, salads, sandwiches, and other popular menu items (http://bit.ly/2reGxSu). La Forge seems to somehow up their game each time I visit anticipating what I will order and ensuring that it is the best of the best. 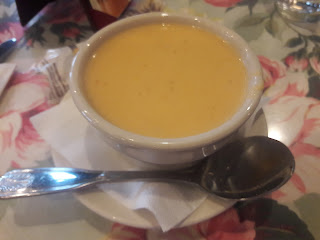 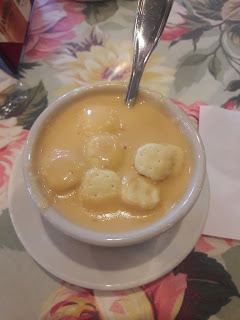 During this visit I had the lobster bisque soup which I believe has never tasted better before or since. I first tried this soup many years ago at the famed Tavern on the Green restaurant located in the heart of Central Park in New York City. Back then I thought it was amazing but they have nothing on La Forge’s version. Here, the soup was creamy while remaining light weight. It was like a fancier, richer version of like tomato soup. There were no pieces of lobster (it was smooth like velvet) and it didn't have a fishy after taste. I was eating the most satisfying soup of my life. I like the cup clean and here it is worth mentioning the I am not a lover of soups. This picker eater was bowled over by my choice. 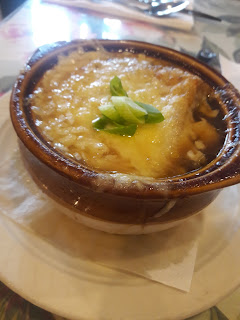 My fellow cohorts both got the French onion soup and that too looked delicious. I had a hard time deciding which of the two to order but I am so glad I went with my instinct. I should know by now that La Forge will never disappoint me. 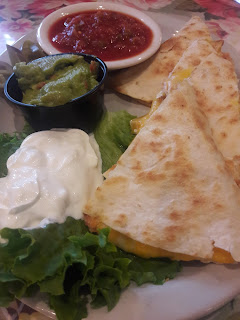 This meal was supposed to be a lunchtime snack but I had built up quite an appetite sightseeing around Newport that day so we decided we needed to split a chicken quesadilla in addition to our soups.

The chicken quesadilla really hit the spot. It was served with fresh salsa, guacamole, and sour cream, as most are. These condiments are among my favorites. The chicken was grilled to perfection and made into a quesadilla with just the right amount of cheese. It may be hard to believe but there is a thing as too much cheese. In those cases the cheese is too overbearing and thick for all of the natural flavors to be truly appreciated. Clearly that was not the case here. Every time I leave La Forge I always leave wanting more.

I had never really knew anything about this restaurant or its history besides what was obvious: that it is loaded next to the International Tennis Hall of Fame and always seems have an influx of people going inside and out signaling to me how it is loved by locals and tourists alike.

After some research I now possess more information.

La Forge opened way back in 1880 and at one time was beloved by Grace Kelly, future Princess of Monaco. Its original proprietor was Maddalena La Forge until she died in 1960. The La Forges also owned and operated the La Forge Cottages were where the rich and famous stayed when in town even if they had their own castles down the road. The former La Forge Cottages are now known as the Newport Blues Inn.

The La Forge Restaurant had only changed hands twice since Madam La Forge’s time but this May marked takeover number three. I hope that the chef remains the same and that these new owners keep up the quality I have come to expect and love at the oldest operated restaurant in Newport.

Nearby Annie’s on Bellevue seems likely to be on my to do list when next I am on Bellevue Avenue. Annie’s has a wide variety of selection on its menu, seeming serving you anything you can think of from eggplant Parmesan to Maryland style crab cakes. There are many things enticing me to this location including the fact that breakfast is served all day.

No worries though. Despite how much I may enjoy Annie’s I know I will still make a stop at my beloved La Forge.