For Life, When in Newport: “Flo’s Clam Shack” 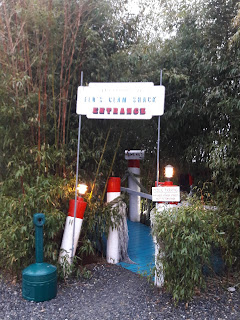 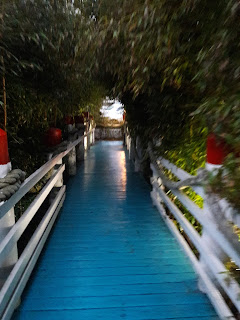 During a recent family gathering my cousin took one bite of the shrimp that was being served, turned to me and said: “well this is no Flo’s”. It sure wasn’t. But in order for you to know what that means I must tell all of the wonderful things Flo is.

Flo’s Clam Shack is a hole in the wall and no that is not an insult. This is where I had dinner my first night in Newport and it was raining cats and dogs. In fact I felt like a drowned rat. I wouldn't have gone out at all except I was hungry and had been anxiously awaiting this meal. 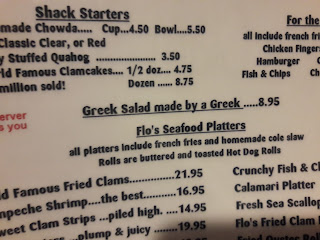 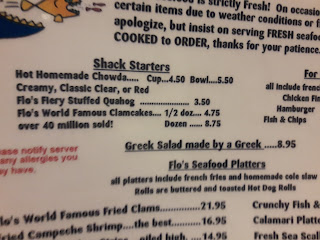 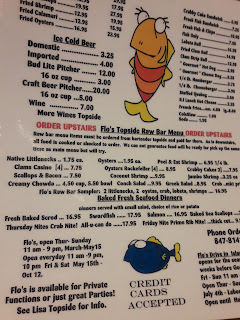 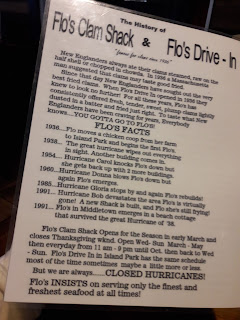 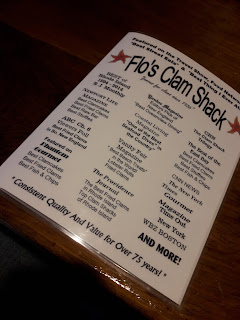 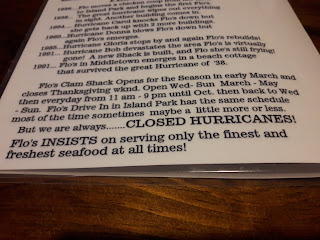 If you Google food in Newport you will end up finding the name of Flo’s Clam Shack, which is of course how I found it. But it is not only the search engine’s favorite Newport hot spot.

Food Network’s “Best Thing I Ever Ate” easily one of the greatest shows ever on television, featured Flo’s Clam Shack on their “Crunchy” episode. On it, celebrity chef Chris Consentino said Flo’s fried clams on a roll was the best crunchy thing he ever ate (see last link below). I believe him since it is the speciality of the house.

Flo’s has been in existence since 1936 when a man from Massachusetts took New Englanders by storm by suggesting they fry their delicious clams. The rest as they say is history.

Flo’s was named for Flora Helger who owned the restaurant with her husband, Dimond during the 1950’s. Since her passing in 1993 Komes Rozes has been the proprietor. No word what the establishment was called prior to the Helger’s connection.

Before you make your journey to Flo’s you need to know a few things.

First of all there are two locations. One is literally a shack in Portsmouth which had been a chicken coop prior to become Flo’s. This particular location only takes cash and has no seating aside from a few park benches. That is the original location that has been rebuilt after several hurricanes took it down. This explains why there are so many signs (including on the menu) that they are closed for hurricanes.

I visited the restaurant in location during a wet, damp night and that was eery enough. Both locations are so close to water that I can’t believe anyone experiencing a hurricane in this beach town had to be warned to stay home but….When in Newport.

The restaurant location has a parking lot around the corner that leads you to a back entrance. The restaurant looks like a well worn two story home and it is decorated to support its beach and seafood theme. 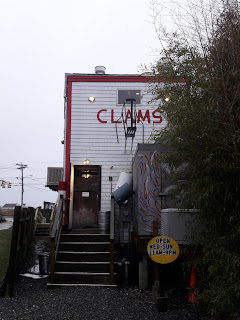 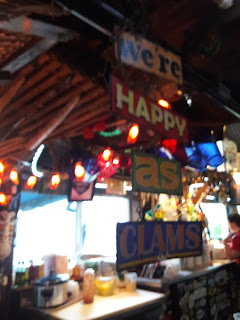 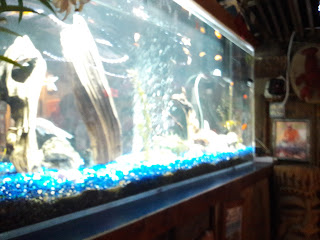 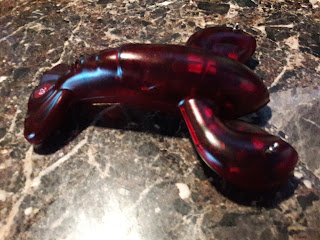 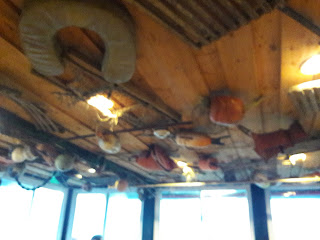 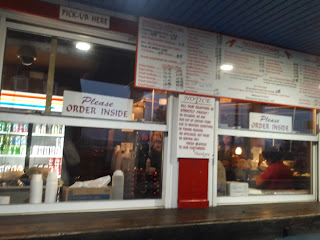 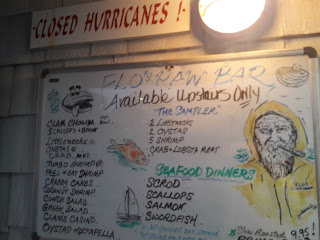 Upon walking through an Amazon like path, that had the sounds of exotic birds with a brush like covering, you feel utterly transformed. If you are me you are also uber excited. I danced down the wooden plank to arrive at my destination. Despite the inclement weather the place was hopping.

We sat down to learn that you go to the counter to place your orders. Downstairs is where you place all cooked food items like salads, fried foods, etc. Upstairs was for raw orders like oysters and apparently also for (cooked) coconut shrimp, which was on my list. I don't know why but I did as I was told.

Back in the day rocks with numerals on them were given out once you placed your order. Nowadays, however, they hand out lobsters that shake when your order is up. This was much more amusing to me. 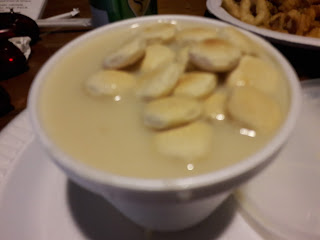 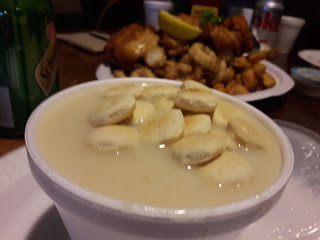 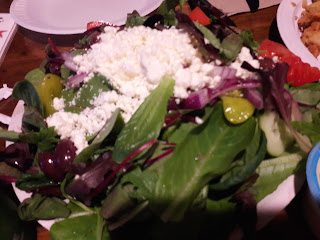 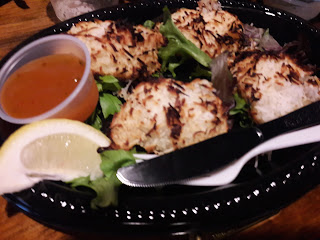 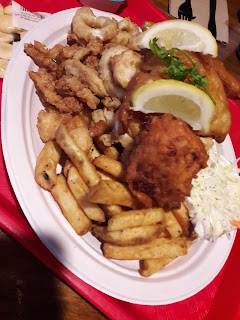 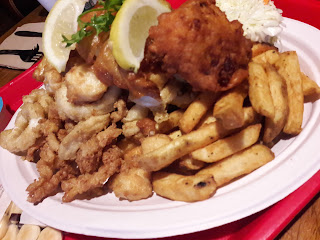 The food was all reasonably priced and ready quickly. They have some efficient preparation system.

Since we were all staving and wanted to try a bit of everything, that is exactly what we did. I started off with the white New England clam chowder and went on to get coconut shrimp, a Greek salad (because the menu clearly states that it is made my Greeks), and Flo’s fisherman platter which had fried claims, clam strips, calamari, shrimp, scallops, fish, and was topped off with a clamcake.

If it sounds like enough food for an army, well it was. But my army of three did a pretty good job polishing most of it off.

The soup was the second kind I have ever tried. It was very good but the first place I ever had it, nearby 22 Bowen’s still rains supreme, but more about them up next. This soup here at Flo’s was creamy but had too many clam pieces for my liking. Plus the one at 22 Bowen’s had potatoes and bacon in it. Those ingredients are always a crowd pleaser.

The coconut shrimp is definitely the best I have ever had. It was a bit unusual considering the sweet coconut it is covered in which seems more the type you would bake with than fry shrimp in. But it totally works.

The Greek salad was also rather excellent and I saw quit a few tables around us with one on it.

As for that fisherman’s platter it was rather a handful. It was nice to have such a variety but it put me over the top. I kept taking bits of everything and sips of my soup in order over and over again. Though I enjoyed everything on this dish I think the fried fish (I believe it was cod) was my favorite part. I think it was even better than the fish and chips I had in London. Sacrilege, yes I know. 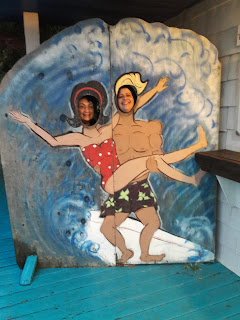 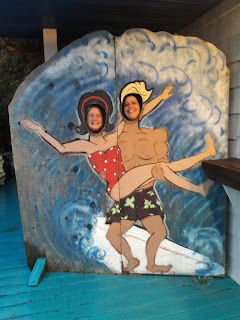 Overall I am very pleased I made Flo’s acquaintance and that it happened at this spot. Leaving I was sure to take photos in the beach themed cut-outs they had which put me just about over the edge.

The only perk to the take out stand is that there is usually a Del’s truck parked nearby selling their legendary frozen lemonades and ices.

Not to worry though I picked up some to make at home while out shopping so I am all covered.

What they say is true: “You Gotta Go to Flo’s”.