For a View From the Top of the World, or at Least the Top of New York City: “One World Observatory” 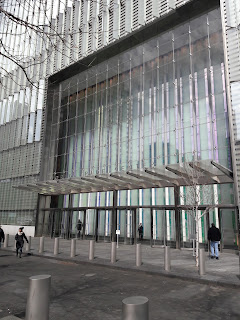 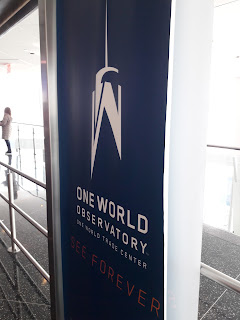 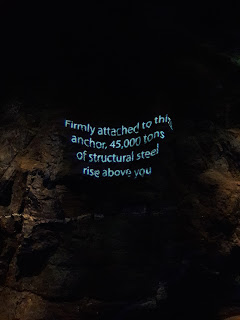 I often say: “I wish I were a fly on the wall”. I now know being a bird in the sky isn't half bad either.

There are certain musts whenever I am in a city for the first time. They usually include a river cruise, maybe an officially bus tour, and a nice long walk from end to end if I can get it in.

But once you have seen a place by land and sea the only way to go is up.

Most cities now have some attractions that will give you great views from high atop a building you were going to visit anyway. In Chicago there is both the Willis Tower and the John Hancock Building (http://bit.ly/2oq9fv2). I have been to both more than once and the view of Lake Michigan over this beautiful city never gets old for me. Most recently the Willis Tower (http://bit.ly/2m5prTT) has added an extension where those that dare can step out on The Ledge far out far above The Second City.

So it was only natural that when I was downtown at the National September 11th  Memorial and Museum (see previous post) I saw it as the perfect opportunity to visit another new NYC institution, One World Observatory.

One World Observatory opened on May 29, 2015 to rave reviews. It is currently the tallest building in the Western Hemisphere, a privilege once held by the Woolworth Building back in its hey day (http://bit.ly/2oqcXVw). It occupies floors 100-102 in it’s building and is located one thousand twelve hundred and fifty feet off the ground.

Prior to this experience the highest building I had been in was the Empire State Building which was the tallest in NYC until the North Trade Tower was built. After September 11th, 2001 it reigned once again until One World Observatory showed up to the party.

One of the very coolest parts about The Observatory is the elevator ride to the top. You are facing screens that take you on a five hundred year journey of NYC until you literally arrive at the present.

As you walk around you will get a three hundred sixty-five degree view. You can see as far as Staten Island, New Jersey, Brooklyn, Queens, and of course all throughout Manhattan. It can seem surreal for sure. 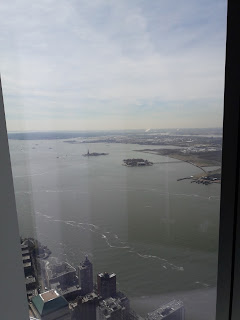 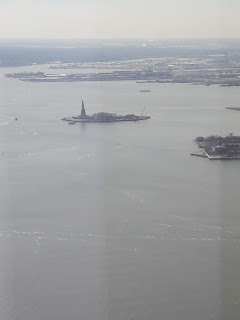 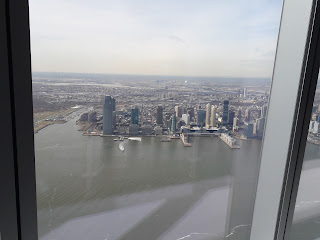 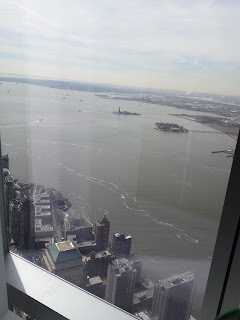 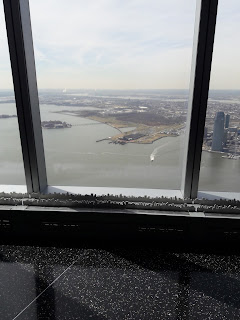 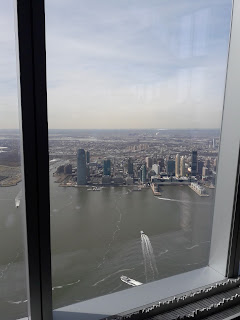 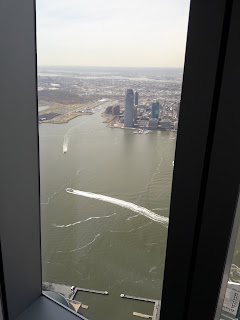 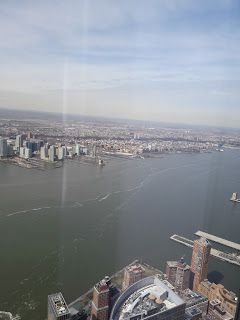 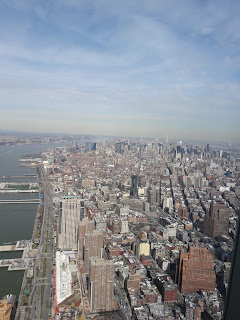 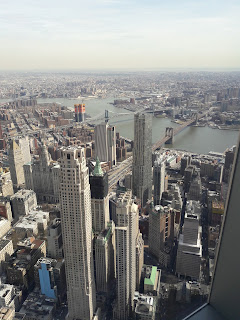 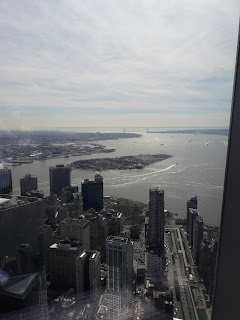 I wandered around making sure to get a good shot of the views all the way around. After about twenty minutes I was happy to say I saw the sights and could go on my merry way. Perhaps if I weren't around these sights all of the time I would have lingered longer.

There are timed entry tickets and I highly recommend purchasing them ahead of time. However if you arrive early and it isn't too crowded they will let you in. Such was the case for my visit and I was happy to find such an easy flow within the restrictions.

After looking and high and low you will work up quite an appetite. Without leaving the building there are three dining options: One Dine which is an upscale restaurant, One Mix for drinks and artisan foods, and lastly my choice; One Cafe. One Cafe had a lot of solid choices like sandwiches, soups, wraps, pizzas, and snacks. There are only a handful of seats but plenty of standing tables where you can lean over and eat that gets the job done just fine.

As I have been planning for a recent trip to Austin I learned about a high in the sky experience all their own except it isn't quite what you'd expect. It is a glass bottom pool!! That sounds crazier than The Ledge in Willis Tower. Austin’s experience isn't for the average visitor though. The bottomless pool is located in Market Square Tower apartment complex, where you need to rent an apartment to dip your toes in over Preston Street. But then again it would be all yours. Since I am not looking to move this isn't an option for me. It is ok though, there is no love lost.