For a Place so Good You’d Think a Singer is Behind it: “Billy Joe’s Ribworks” 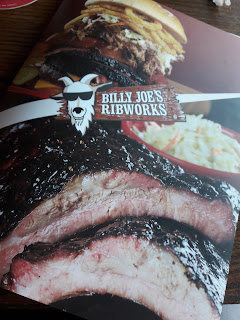 You know me. I love a cool place (both figuratively and literally) to hang out with friends for good conversation and even better chow. Billy Joe’s in Newburgh, New York has all that and more.

This past Friday it was so gorgeous out it was like living on a movie set. I was spending the day upstate and it was a perfect day for it. Having a late lunch on the river seemed like a bright idea.

From the outside of the restaurant it looks like a hanger where meat has arrived after coming from the slaughterhouse. It is a barn like structure that does not for a second indicate how well…fun…it is inside.

When you walk in there is a great big open space decorated with many local signs. Everyone you pass as you walk through stops to say hello and welcome you and not in that annoying way I usually hate when as a NYC resident I normally speak to no one. But here the friendly vibe is genuine. It feels like you are stopping in to see old friends even though it was my first time there.

I sat somewhere in the middle of the restaurant where you could look outside to see the sun dancing on the river and an adorable walkway you could happen upon. I would have taken a seat outside but siting directly in the sun is never a good idea for me.

There is no information on their website about the history or the owners but I read an article on North County Rambler from 2011 (see link below) so I presume the restaurant opened around that time. In fact it is from that article where I found the only traces of the origin of the name.

Legend is that the rib rub recipe came from an outdoor BBQ stand near Galveston, Texas where these ribs reigned king. The owner of that establishment supposedly shared his famous recipe with a goat, Billy Joe, who brought it to Newburgh.

The author of the aforementioned article and I both think that unlikely.

“More likely the name sprang from the names of the proprietors – Joe Bonura, who brought you Shadows and Anthony’s Pier 9, and his partner – local entrepreneur, Billy Kaplan.” 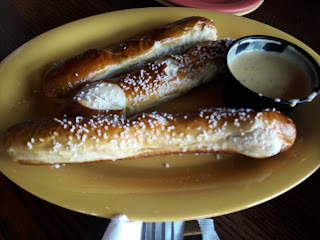 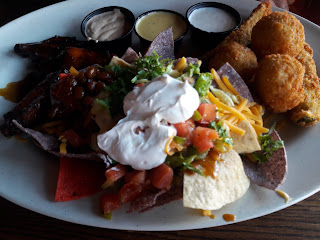 For an entree I had the Little Billy Joe’s which are three beef sliders, I added a fourth for one dollar, served with smoked onions, BBQ, and melted cheddar cheese. What’s not to like? 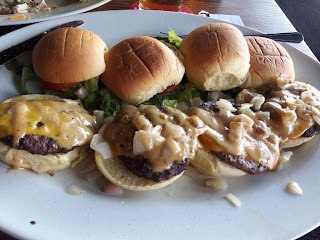 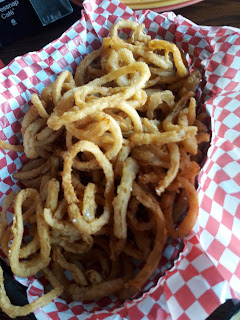 I ate myself right into a corner. I was so fill from the appetizer sampler yet I could have kept picking at that thing till the place closed. I love having a taste of everything with nothing being the main dish. I don’t know why I actual don't order like that every time I go out, especially when I’m with people to share things with. Like Will Truman said in an episode of Will & Grace “my dad always says I could make a meal out of appetizers, so that’s what I made, a meal of appetizers”. Doesn't that sounds good?

The small piece of pretzel I had was good especially with that cheddar cheese sauce but the sampler was outstanding. The wings were good but I was wayyyyy more into the nachos that were sweet rather than spicy, the fried mac and cheese balls which never go out of style, and the fried pickles which were the first I’ve ever had that where the long sphere kind you get in a jar. Prior to this, any fried pickle I have had where thin and circular. But this were surprisingly good. 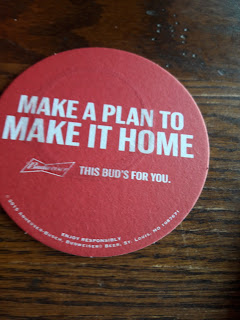 My Little Billy Joe sliders were delicious as well but by that time I was sooo done. I picked at one and a half of them, sorry I was wasting food. But I sat there taking in the view, chatting away, while polishing off my very crisp, cold, glass of Apple Orchard Hard Cider. I could have sat there doing that for days on end. As is I was there for over two hours.

While I am not a tremendous fan of Billy Joel’s, I am in love with Billy Joe’s and it is the kind no man can divide.