For Find Out Friday Week 34 - Who the F-ck Was Hugh L. Carey and Why is He Ruining My Life? 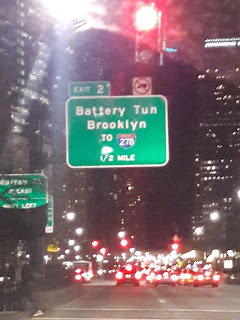 Have you ever sat in traffic so long you made a full transition from calm, to becoming slightly annoyed, to full on rage, and then back to taking deep breathes to calm down again? If not you must live in a town with less than a thousand people and not get out much. That is not a judgment it is pure jealously, especially when traffic is so bad I am convinced I am in the depths of hell.

I assure you I am not being dramatic here. Living as part of the so called “bridge and tunnel” crowd traveling into and out of N.Y.C. can be a nightmare. It is a reason that friends I have that live out of state, who can name a million reasons why they wished they were back living here, shiver with the thought of commuting and rest easy they no longer have to fight that battle.

It was during one of these crusades to get home while sitting in my car as I was pondering of all of the idiotic reasons a wonderful evening has now turned into a treacherous ride home. As I sat there going through my own version of the stages of rage (see first sentence above) I happened to look up at the signs around me. Yes, I knew where I was but I did not know why the man’s name I was staring at appeared to be ruining my life.

The tunnel I was trying to get through had been known all my life at the Brooklyn Battery Tunnel, which bypasses Governor’s Island and is “the longest continuous underwater vehicular tunnel”. It is also the largest such tunnel in the country as it proclaims.

In the last few years N.Y.C. seemed to go through a rebranding of sorts. Around this time the Triborough Bridge became the R.F.K. Bridge, the Queensboro Bridge changed to the Ed Koch Bridge, and finally the Brooklyn Battery Tunnel was now the Hugh L. Carey Tunnel.

As a life long New Yorker I had never heard the name Hugh L. Carey in my life. He could have been a murder for all I knew. SPOILER ALERT - he was not. Actually if he had been a mass murderer there was a greater chance I would have known who he was due to my affinity of the I.D. Discovery channel.

So I decided that as soon as I got the chance, assuming I would eventually get home, I would find out who the man was behind the name I spend so much time staring at.

I am proud to say he is from Brooklyn, born and raised, on a playground is where he spent most of his days. I am kidding unless he and the Fresh Prince of Bel-Air are alike in any way.

He is most noted for saving N.Y.C. from bankruptcy saying: “the days of wine and roses are over”.  At the time he was Governor and New York City was over five billion dollars in debt, with no ability to borrow money from anywhere. Carey infamously took then President Ford to task for his unwillingness to provide any federal loans. Carey’s response was to cut corner’s in the city’s budgets specifically in the mayor’s office. There were also a series of higher taxes and transit fares, fewer government services such the free tuition that was offered at the time to City colleges.

Former Mayor Ed Koch praised Carey once telling the New Times that Carey “saved the city and the state in 1975”.

Prior to his life in government, Carey served in the Army during World War II that was part of the units to release prisoners in concentration camps. He had attended St. John’s University in Queens, New York, where there is now currently a Community Grant offered to all full-time freshman in his name.

Fun fact: it was Hugh L. Carey who initiated the classic “I Heart NYC” campaign.

As a confirmed city mouse I love cities all around the world and so it is not likely that traffic will ever be a problem I can truly purge. I suppose I shall take this lemon and continue to make a very educational blend of lemonade.

Move on over Beyoncé.