“Who doesn't love the Golden Girls?” That was a response I got from my new friend when I told her I was planning on visiting Rue La Rue Cafe that afternoon. I suppose the answer to her question is “no one”. I mean the show has been over for twenty-five years at least and yet here I sit writing about the show I adore yet again (http://bit.ly/2mdRgX7). To say it was ahead of its time as well as remaining timeless is just the beginning. One of my favorite Christmas presents this year was receiving the complete series on DVD. Thanks Glenn! 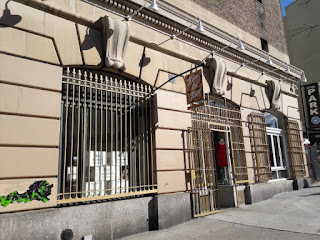 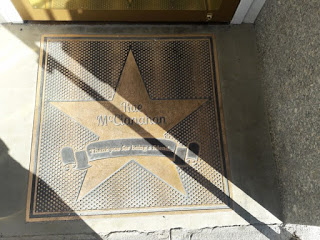 Rue La Rue Cafe has an interesting name to go along with the interesting story that brought about its existence. Co-owner Michael La Rue met Rue McClanahan, who portrayed Blanche Devereaux on the Golden Girls, as if you didn't know, at a charity event at Studio 54 in 2001. They became instant friends and Rue wished her real name had been Rue La Rue, hence the name of the cafe. When Rue McClanahan passed away in 2010, Michael was the executer of her will. Rue had also left him the bulk of her memorabilia. Per her Golden Girls contract she was allowed to keep all of Blanche’s clothes and items. The fountain of special memories that they create runs deeply. 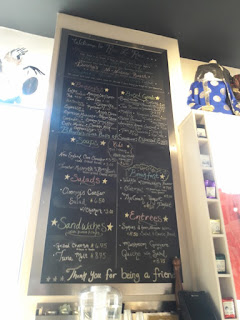 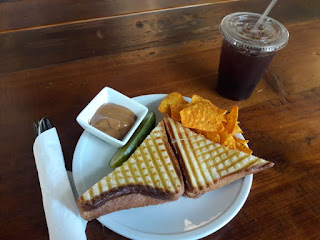 Along with Ms. McClanahan’s son Mark Bish, Mr. La Rue opened the cafe. It is important to note that the cafe is in Washington Heights, the upper part of Manhattan where Mr. La Rue lives and feels can serve a more diverse crowd. While the cafe is not near my usual stopping grounds, I had decided to make a special trip to this neighborhood just to visit this cafe and boy am I glad that I did. As soon as I walked up to the door I knew I had arrived at a place I belonged. Seemingly ironic the cafe is located next door to “Sofia’s Storage”. Fate’s got jokes. 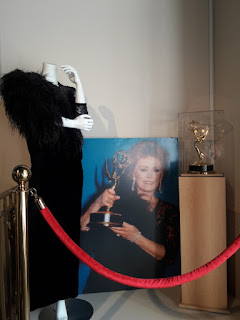 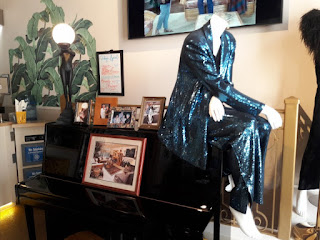 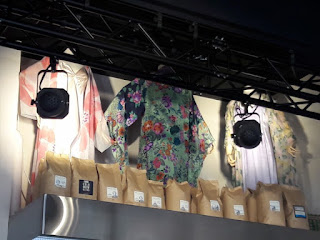 Once you are inside it takes a minute to decide where to look first. Most people I noticed proceeded just as I did. After ordering, eating, and getting settled they then took the time to walk around and photograph what they saw. There is no shortage of amazing sites including Rue’s 1987 Emmy for Outstanding Lead Actress displayed  alongside the dress she was wearing that night.

Her piano is nearby with frames of personal photos on top. The surrounding walls have scripts, playbills, photos from every decade of her career, and oh so much more. One of the highlights here is that the bathroom tile is a replica ofd the one on the show and the crazy statute on the door was one from her house. But the best of the best has to be the banana leaf wallpaper from Blanche’s bedroom along with the iconic yellow telephone from their kitchen. Naturally I took my photo with each.

In an article in the New York Times (see the link below) Mr. LaRue said: “I know people who put on ‘Golden Girls’ DVDs the way others take a Valium.” I am so apart of that club. 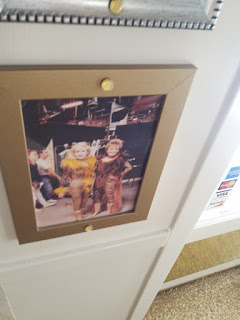 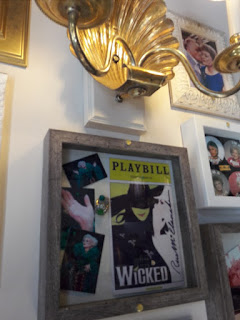 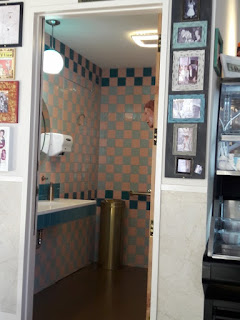 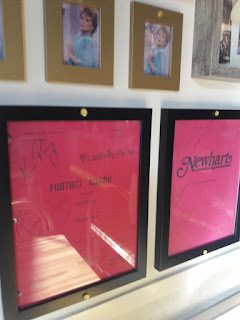 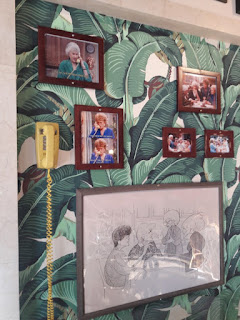 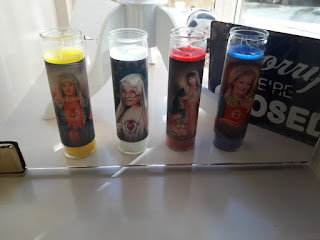 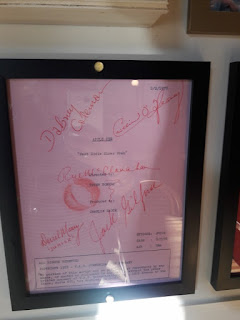 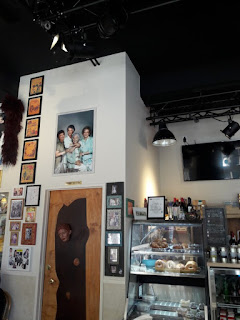 The cafe had its soft opened last month and has now added lunch items to the already full menu. Surely there are meals named after the characters and you best believe they serve cheesecake. While I did not have any I saw someone who did and it looked yummy. I was more in the mood for food so I went with a grilled cheese. When the man behind the counter asked if I wanted Doritos with it I nearly cried. I could get coffee, Doritos, and watch the Golden Girls?! It is my version of heaven. Oh did I forget to mention that? Yep the Girls run all day long and you will get just as engrossed in it if not more so than you already do at home. 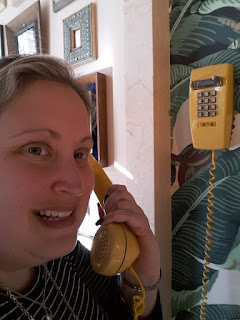 After ordering your food at the counter, you choose a seat and when your food is ready it is brought to you. My grilled cheese was not only delicious and decorative (with fancy lines from the panini grill) it came with a pickle and a side of spicy brown mustard. I have never before though to dip a grilled cheese in mustard but now I can’t imagine eating it any way. The Doritos weren't too shabby either. I washed it down with an iced Americana and all was well with the world. 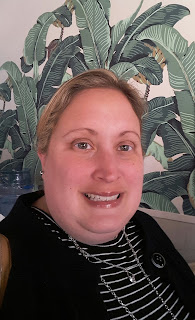 Besides being colorful and friendly, the staff is also on top of their game. I have never seen a cleaner establishment. There was someone cleaning the windows outside, wiping down a table, or rearranging the sugars and milk, every other second. Their hard work and diligence paid off.

For good measure I made sure to bring home a souvenir, one of the cafe’s signature blends, “Sophia’s, Picture It” Italian Roast. I was sad but also relieved that there isn't a formal gift shop. Lord knows Rue La Rue Cafe would have taken all my coins honey.

Instead they have just taken over a huge space in my heart.