For How to Succeed in Business Without Really Trying 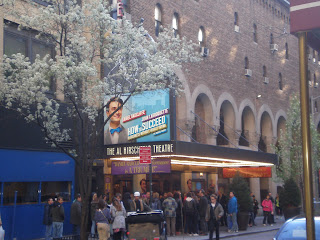 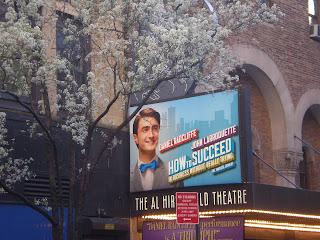 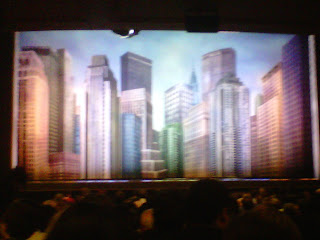 I have seen this play before. Ok not this particular play or the incarnations that came before it. But I have seen this type of show before. This play should have been called How to Succeed in Business Without Really Trying/Bye Bye Birdie/Promises Promises. I suppose it’s because they were all written and take place in similar time periods, the 1960’s give or take. There is the leading man, handsome and trying to accomplish something- here it’s being successful in business. Then there is the pretty secretary who is in love with that man but has to cut her losses at some point before returning to him. Then they are the bright, too bright lights, costumes, and flashing backgrounds. There seem to be a 100 ensemble cast members/dancers and no matter the actual count, its more than any show needs. They are taking away from the story and adding to the total show time. For every scene that is central to the story there are two that are pure unnecessary dancing.
I also hate when the beginning of a show is 10 minutes long and is just a chance to hear the orchestra play. Now I am sure they are very talented and if I were related to someone who was playing I would want to hear them endlessly, however it has no importance. I believe shows do that to build up to the opening scene but there is no need. Obviously we are anxious for the show to begin, we have paid for our ticket, counted down the days, and now it’s enough. Now to be fair I was suffering from a migraine when I saw this show, but I assure you my reaction would have been the same, just less painful. 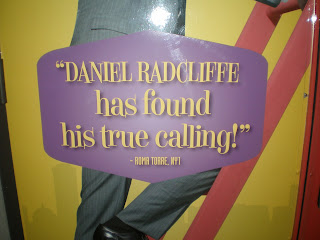 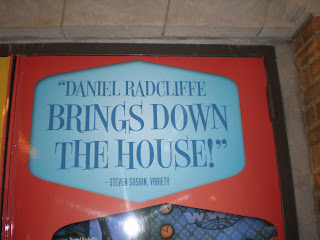 As for this leading man, Daniel Radcliffe, he was divine. Despite the tough reviews he received from critics I think he is super talented. He is singing and speaking in a convincing American accent and makes the dancing look effortless. He has brilliant comedic timing. Without him and his star power I am afraid this production would have been a bore. John Larroquette is also quite good as Daniel’s foil and boss. But the new break out talent I believe is the lead female character, Rosemary Pilkington, played by Rose Hemingway. As I suspected this is Rose’s Broadway debut and I believe she will be nominated for a Tony award. She is the glue holding Daniel, John, and the storyline together. She is a superb singer and fine actress.
But the “actor” who ties with Daniel as my favorite part, is my fake husband Anderson Cooper. He plays the part of the narrator, which was portrayed by Walter Cronkite in the 1995 Broadway revival. This part is solely a voice over role but it illuminates the main character’s journey. I have to admit hearing his voice sporadically throughout this performance was a delight.
For some reason I diluted myself into thinking that I wouldn’t be surrounded by teenagers and annoying out of towners seeing a play with “Harry Potter” during spring break. I know I know I know: I have nerve dissing tourists after just blogging about how much I love being one, but honestly I can’t help myself. There is being a tourist and being an idiot. The people sitting around me were both. No one seemed to know what the show was about and here is my favorite- they thought Anderson Cooper was actually backstage simultaneously performing in this show (keep in mind we never see him) and his live 2 hr cable news show. For the record, Andy was in New Orleans that week for the 1-year anniversary of the BP oil spill.
Lastly, there is the stage door experience. Like I said earlier I wasn’t feeling well, but being the trooper that I am I went to the stage door anyways. I left at the applause naturally (see previous blog: For those who want to learn to stalk properly). I knew it would be a zoo but I thought what the hell I am walking out that way anyhow. What I saw stunned me to my core. I have never seen such bad crowd control in my life. Apparently I underestimated the desire to see Daniel Radcliffe. There were literally 100 people outside when I got there. People starting leaving 30 minutes prior to the ending and it was mayhem. There were no cops, no guards, and no order. I was lucky enough to walk away without getting trampled in that crowd. I felt bad that I didn’t get to meet the stars but I did get to meet Mr. Radcliffe when he was in Equus so there is that consolation.
Just like the Facts of Life theme song says, “you take the good, you take the bad.” That’s how I feel about this show. When all things are considered I am glad I saw it and would recommend seeing it to others. I just won’t be a repeat attendee. But like the show’s title they succeeded without really trying.