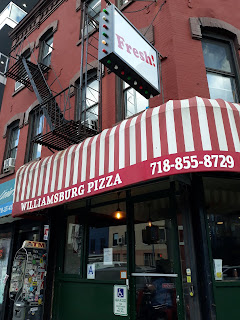 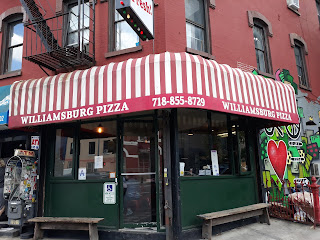 That is what I would say if I ever get the chance to meet the current restaurant critic for The New York Times. His is an opinion I have high regard for and he has never steered me wrong.

So when it came to writing my annual to do list this year (https://bit.ly/2WatoF2) I looked to the article he wrote in November 2018 (see link below) for guidance. 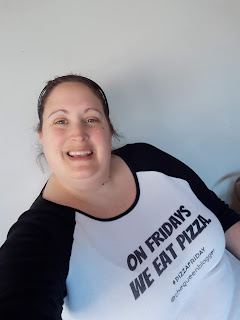 As I celebrate #pizzafriday every week, I needed some inspiration for new places to visit. Most of his list has made it onto mine and for good reason. The most recent being “New Park Pizza” (https://bit.ly/2W4ztCz). That was a place I passed by many times and even once inside I wasn’t completely convinced I was going to enjoy it. But I needed had worried. Mr. Wells takes his food very seriously and he was as they said in my favorite movie “My Cousin Vinny” he was “dead on balls” accurate. In fact, since the day I posted that review I have been back to New Park Pizza several times. It has never disappointed.

Truth be told I had heard of “Williamsburg Pizza” before. In fact, I have had a slice of it before. And hated it.

That was back in November during my visit to the pop-up that was the “Museum of Pizza” (https://bit.ly/2rsOJMK). With each ticket you received a “complimentary” slice of pizza on the way out. It was a regular slice and it was awful. I contributed largely to the fact that it was being reheated as you were served but overall the best part of that slice was the Hidden Valley Ranch seasoning I had slathered all over it. I had no intention of ever visiting the actual shop. But then Mr. Wells mentioned it and all bets were off.

“The regular slices are good enough, but Williamsburg Pizza vaults itself into the pizza ionosphere with its grandma squares. The ones sitting out at the counter may appear past their prime; forge on, because what emerges from the oven is freshly assembled (try the Apple Bacon slice, with walnuts and three cheeses) and as crisp as you can imagine, with an oily sizzle on the bottom and a lacy collar of browned grated cheese around the edge.”

Well, there was the first discrepancy, he was raving about the so-called grandma slice, which is basically like a Sicilian slice but less doughy. Though the regular slice did nothing for me; it was this thin, crispy slice for which I visited. 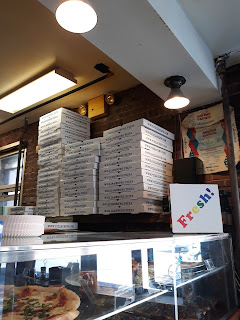 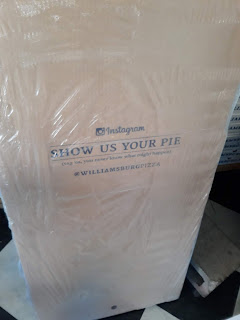 As I pulled up the shop looked like a place you should be afraid to eat in. It was shabby and small but I know from previous experiences that the places that look the worst often have the best food. I got a parking spot right in front so I was going in no matter what. 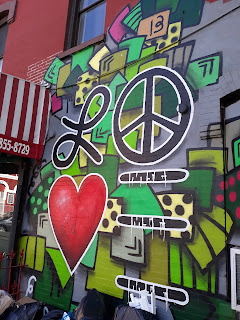 As I approached the first word I saw, even before the sign for the pizza place, was “Love”. That was a symbol of the experience I was about to have, both literally and figuratively. 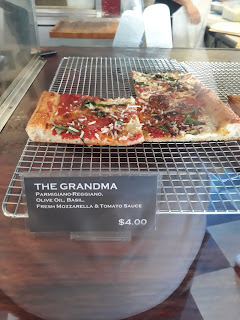 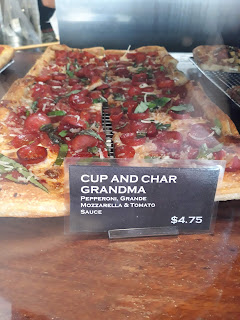 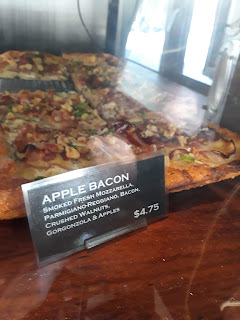 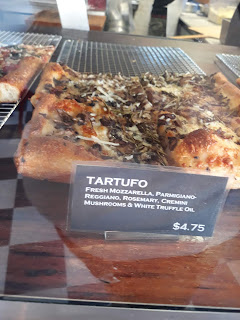 Inside there were many slices behind the glass display case but I focused all my attention on those squares.

First I tried the pepperoni. 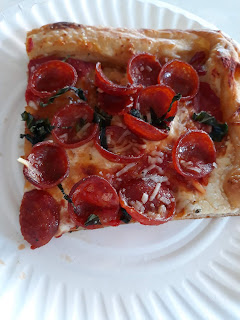 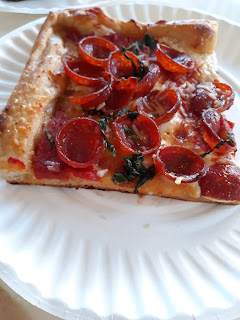 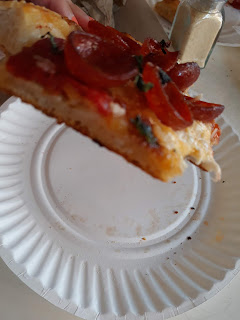 It was a bit spicy but the consistency, especially the crust was show stopping. It was crunchy but not hard or deprived of flavor. Speaking of which that sauce was amazing. There was fresh mozzarella cheese, which is my favorite, as well as a rich garlicky flavor. 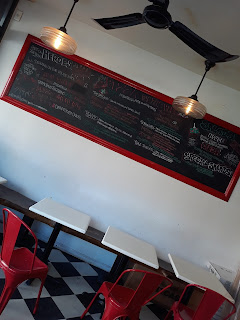 I tried a garlic knot that turned out to be more like a small pinwheel of dough with cheese on top, served with a side of that aforementioned delicious marinara sauce. It was very good, just not garlicky. 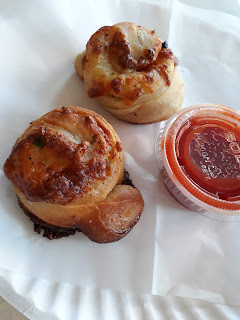 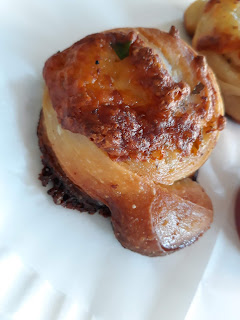 Next I tried the Margherita slice. There was one that was regular but once again I went for the grandma slice. This was even better than the pepperoni. It was so rich in flavor and went down so easily. Some times pizza can be too salty or have a garlic or oregano flavor that is simply overpowering. Here there was no such problem. 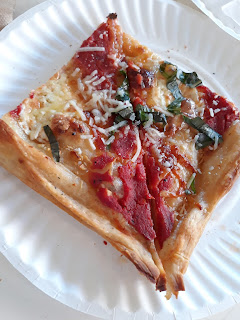 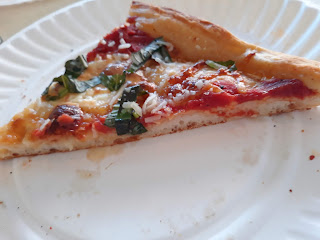 I promptly ordered a pie to go and continued eating slices of this throughout the night. I even microwaved one just to warm it and it never lost that crunchy crust. It never dried out. The flavor remained perfection. 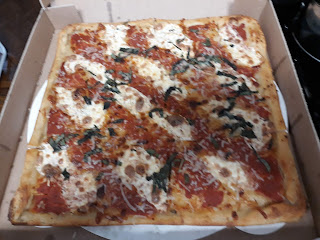 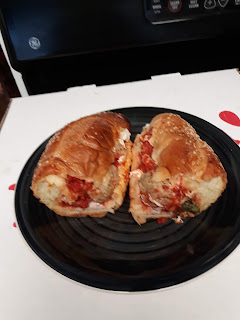 I also ordered a meatball parmesan hero to go as the chalk board claimed they make the best ones on the block. Full disclosure - I didn’t see any other sandwich places on the block but I have to say they were right. I tasted a small piece of it and I was impressed. Once again there was some fresh mozzarella cheese and just the right amount of sauce. The sandwich wasn’t soggy and was served on a seeded Italian bread.

I suppose if I had to find a problem with my visit to Williamsburg Pizza, I can think of two. First there was no bathroom. Second there are only a few seats and if you are sitting on the bench as I was, the table wasn’t level to your seat. But those are my only complainants.

Williamsburg Pizza has five locations, two in Brooklyn including the one I visited, as well as three in Manhattan. The first shop was opened in 2012 by Nino Coniglio and Aaron McCann, who met via Craigslist, and became successful after winning the Pizza Maker of the Year Award at the 2016 International Pizza Expo.

Not surprisingly I know another owner who too had success at that expo as well as in business. That would be Joe of “Joe’s Rotisseria” who I visited in March of this year (https://bit.ly/2xa2BhO).

The owners of Williamsburg Pizza are currently working on a documentary about their rise to pizza stardom as well as an app that will enable everyone to order food for delivery as their earn reward points for future purchases. In addition, they are also looking to open a place that will seat more customers, ideally around sixty to seventy people at a time.

I think the biggest compliment I can give Williamsburg Pizza, is that during my first slice I was contemplating returning to nearby “Paulie Gee’s Slice Shop” (https://bit.ly/2UVMA9K) and bringing home a pie of their signature slice, the Freddy Prince. This is one of my all time favorite slices of pizza. But after tasting the Margherita slice at Williamsburg Pizza, I decided to go with that. Anyone who has tried the former will know that in order to be swayed this had to be amazing pizza, and it was.

I really loved my grandma.

And I really loved this pizza.

It is worthy of the name.