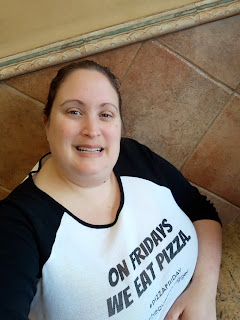 A few months back, I spent a #PizzaFriday in Greenpoint, Brooklyn. I was visiting the infamous restaurant and slice shop of “Paulie Gee’s” (https://bit.ly/2UVMA9K). It was in that slice shop that I would discover a slice of pizza I would continue discussing every time I saw one that was similar but oh so disappointing.

For anyone who has visited Paulie Gee’s Slice Shop you know what slice I am talking about. It is none other than the “Freddy Prince”.

At first I thought it was a nod to the actor who is married to Sarah Michelle Gellar, Freddie Prinze Jr.  Sure it seemed strange but once I bit into the slice I no longer cared who it was named for. I just craved more of it.

In case you are not familiar with the slice (in which case I implore you to get off your ass and get to Brooklyn ASAP) it is described on the menu as an: “upside down Sicilian with fresh mozzarella, tomato sauce, pecorino romano and a sesame seed bottom”.

As I researched my blog about Paulie Gee’s I learned the true source of inspiration for my new favorite slice. It was a combination of the sesame seed bottom of the Sicilian slice from “Freddy’s Pizzeria” and the crunch and flavor of the slice from "Prince Street Pizza”.

Ever since I learned this information I knew I had to visit both of the pizzerias that had inspired this amazing creation. As of today, or more likely by the time you read this yesterday, I can cross Freddy’s off my annual to do list (https://bit.ly/2WatoF2). 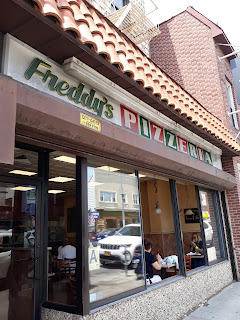 Freddy’s is a neighborhood pizza shop located in the Whitestone section of Queens. I had been highly anticipating this visit given my previous experience. When I looked through the glass case on the counter I quickly learned that only the plain Sicilian slice had a sesame seed bottom. I ordered one of those and one of the squares that had fresh mozzarella and tomato on them. 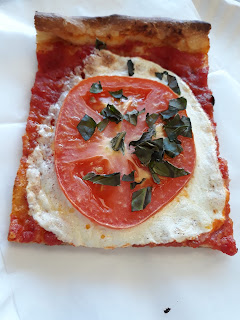 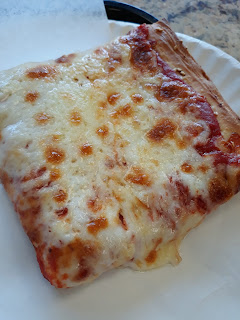 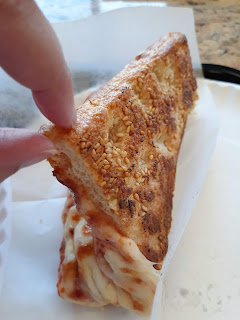 As soon as I took a bite of the later I was incredibly disappointed. The tomato was not ripe and I pulled it off immediately. I poured a copious amount of garlic powder on it and swallowed the half I had (I was spitting both slices with my pizza tasting buddy aka my mother).

As for the regular Sicilian sure it had sesame seeds on the bottom but that was the only resemblance it had to the Paulie Gee’s slice. It too got a good shaking of garlic powder on it and it took me forever to eat it. I wasn’t starving and it wasn’t appealing. It had no flavor.

Time after time I am constantly amazed by the slices I love and the slices I don’t. I never seem to guess correctly just by looking at them. The best, most surprising example was “New Park Pizza” (https://bit.ly/2W4ztCz). 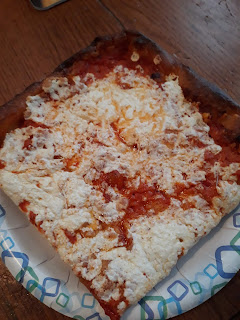 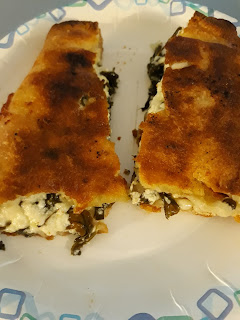 My mother tried the vodka sauce square slice next and seemed to like that, so I ordered one to go. We also ordered a calzone with spinach that was also for later on.

Fast forward a few hours and I was hungry. I ate the vodka slice which had been kept at room temperature and I really enjoyed it. It was just like my mother had described earlier “very parmesany” but in a good way. At least this sauce had flavor. I scarfed it down and was soon heating up the calzone.

The calzone was smaller and lighter than most I have seen. I am not sure if it was baked or fried but it had a nice flavor and the right amounts of spinach, ricotta and mozzarella cheeses respectively.

In an interesting twist my research about the Freddy Prince slice today has led me to discover that “Best Pizza” (https://bit.ly/2HDHqMc) also uses sesame seeds bottoms, but only on their white pies. I loved my visit there but I had ordered a regular pie with mushrooms so I had no idea about the seeds. Their pizza is amazing so I guess this is a good excuse to go back, not that I needed one.

As glad as I am that I got to cross this fifty year old pizzeria off my to do list, all it really did was make me crave another visit to Paulie Gee’s Slice Shop.

All I have left to say on the matter is that the student has really surpassed the teacher.