For Find Out Friday - What Time Is It in Arizona? 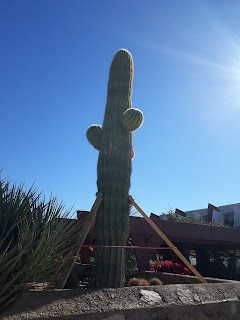 My best friend lives in Phoenix, Arizona. Though she is a very busy woman, we speak nearly everyday. So often, in fact that I forget she lives in another time zone clear across the country.

When we speak I never really pay attention to the time, but as I am in Brooklyn, New York, there is a two hour time difference between us. Lucky for me, time and space have done nothing to diminish our friendship. It has only gotten stronger over the sixteen years since we first met.

Way back in 2007 we took a girl’s trip to Las Vegas to celebrate my twenty-sixth birthday. Two important things happened during that weekend. First, and most important, my friend met the man she would marry. Second I learned that Arizona does not participate in Daylight Savings Time (DST). In between those two moments there was many cocktails and fun had.

But back to today’s topic.

What other states also opt out of this biannual tradition?

Why does the time always change at two a.m.?

We all know that Daylight Savings Time is the practice of setting our clocks ahead of standard time during the year as a way to conserve energy, allowing the sun to set later in the day.

In 1895 George Hudson, from New Zealand, was the first one to come up with the idea of DST. He wanted a two hour time difference so that there were more hours of sunlight after work for bug hunting, of all things, in the summer months.

A few years later it was a Brit, William Willett AKA the two times great grandfather of Coldplay singer Chris Martin, who thought of a similar idea. He brought his idea to Parliament and it was wildly popular. Even Winston Churchill was in favor of it. But the government was not so sure. Willett died in 1915 before his idea came to fruition.

Germany was the first country to actual implement DST in 1916. Britain finally followed suit the same year. The USA enacted its first ever DST law on March 9. 1918 which also clearly defined time zones within its borders.

If you do any reading at all on this subject you will no doubt stubble upon a myth that Benjamin Franklin was the first to come up with an idea to “save time”. In fact he only actually purposed getting up earlier to not to waste any productive time during the day.

There are only two states in the U.S. that do not participate in Daylight Savings Time. The first is, you guessed it, Arizona. The other is Hawaii.

Arizona typically runs temperatures in the three digits during the summer months and thus has no desire for an extra time during the day. They prefer to have more time at night, when it is cooler. Who can argue with that?

Apparently the Navajo Nation, which is located in Northern Arizona. They observe DST so you can literally drive through the state and not be aware that your watch is incorrect. How confusing is that?

About half of the world doesn’t change their clocks (backward and forward) leaving a large portion of humans on any entirely different schedule.

The countries that do not follow DST are typically located near the Equator. Since the weather in these parts does not tend to change much season to season there is no real need to change their clocks backward or forward. No one would be able to tell the difference.

But there are of course exceptions, such as parts of South America like Chile and portions of Brazil.

In Australia; it is up to each state whether or not they use DST. Those who do not are Western Australia, Queensland, and the Northern Territory.

In Asia; China, Japan, South Korea, Taiwan, and India do not observe DST.

In Iceland, a place I have an urgent need to visit soon, does not follow DST unlike their European Union counterparts.

As for Africa; almost all of the country does not follow DST except for Egypt, Libya, and Namibia.

In these United States there are some that are changing their minds. One would be California. This past November, Californians voted to end and eliminate the changing of clocks in March and November respectively. This still has to be passed by the legislature and then Congress.

Florida too has joined this ban wagon and is also waiting for additional legal action.

Europe appears to want to join the party as well. Approximately eighty-four percent (roughly five million people) favored getting rid of this seemingly ancient practice. However, this would have to be passed by the European Parliament.

Popular reasons for disregarding DST has to do with the lack of need. We are no longer saving energy and in fact this practice seems to be harming our health. Studies have shown that there is an increase of heart attacks and workplace injuries surrounding the days we change our clocks, mostly believed due to the lack of sleep.

As for the answer for my last question, why the time officially changes at two a.m., this has to do with lifestyles in the early twentieth century. It is thought that most everyone who worked at night would be home, as well as those who frequented bars and pubs. It would also be early enough for those who woke early the next morning. Lastly, it was a time of day where changing the clocks back didn’t change the actual date as it would if we changed the time at midnight.

All of this talk of time, that originated around my thoughts about Arizona, could not be more appropriate, as today is “Arizona Day”. On February 14, 1912, Arizona officially became part of the United States of America. Why, then you ask, do we celebrate that activity on June 21st? The answer is because the folks at “National Day Calendar” say so.

We will “fall back” on November 3rd, at two a.m. this year so be sure to mark your calendars. Of course I kid. Our smart phones and modern technology will automatically make this change for us. Oh the joys of 2019 with a practice originated in 1900s.