For Find Out Friday - Did the Man Who Parted the Red Sea Also Build a Hospital in Brooklyn? 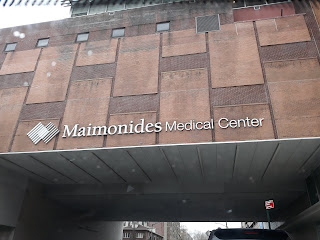 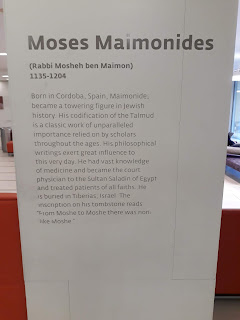 I am not a religious person. I would say I am more of a spiritual person. This is despite the fact that I was raised Catholic with all the bells and whistles. However, sacraments and holidays aside, we weren’t (and still are not) regular church going people. I say this to clarify that although I am sure I was taught at some point what is in the Bible, my knowledge is limited. Thus I only know what I have seen on TV about Moses, namely that he parted the Red Sea.

The title of this blog is a joke, because I think it is funny. I know Moses didn’t build a hospital in Brooklyn, otherwise I would have seen it in the movie. Again, I kid.

I mentioned last year (https://bit.ly/2DPPKWv) that my mother had heart valve replacement surgery. Part of her recovery including attending cardiac rehab at Maimonides Hospital in Brooklyn, New York.

In all the time I spend taking her back and forth, I never knew how the hospital got its name. It is a hospital I have visited many times and was even born in. So I figured I needed to know more about how it came to be.

For starters, it is named for Moses Maimonides, as clearly indicated on the sign below that you see as soon as you enter the hospital’s main door.

But just who was Moses Maimonides?

Moshe Ben Maimon was born in the year 1135 in Cordova, Spain. He was better known as Maimonides, and was a philosopher who also was deeply committed to the betterment of society.

Aside from being a prominent Jewish philosopher and a top scholar of the Torah during the Middle Ages, he was also an astronomer and physician known for laying the foundation of modern medical training. He worked as a rabbi, physician, as well as a philosopher all over including Morocco, Iraq, Yemen, and Egypt. He died in the later in 1204 and was buried in Tiberias, Israel.

As far is the hospital is concerned, it was originally founded in 1911 and at that time was called the New Utrecht Dispensary. Following mergers with smaller dispensaries, as well as Israel Hospital of Brooklyn, the United Israel Zion Hospital, and Beth Moses Hospital, one uniform hospital was established in 1947. In 1966 it was renamed Maimonides Medical Center. The cornerstone of Israel Zion hospital remains intact.

Maimonides Hospital is renowned as the largest hospital in Brooklyn with many innovative medical developments having taken place there.

Some of their top accomplishments are:
In 2007, The New York Times noted that based on a report done by the Department of Health and Human Services on five thousand hospitals, Maimonides had some of the lowest mortality rates placing in the top fifty of those studied.

In 2010, Maimonides received the HealthGrades Distinguished Hospital Award for Clinical Excellence. It is no surprise than that this hospital ranks as part of the top five in New York State for cardiology services, coronary interventional procedures, stroke treatment, as well as gastrointestinal medical services.

Maimonides once said: "The physician should not treat the disease, but rather the patient who is suffering from it.”

I cannot think of a better way to honor a man who himself was such a brilliant thinker, than my naming this groundbreaking institution after him.