For Find Out Friday - Does a Spoonful of Sugar Really Help the Art Be Understood?

Just the other day I wrote about a lovely lunch I had in Williamsburg, Brooklyn at Fornino (see previous post). Directly across the street is the former site of the Domino Sugar Factory, which at the height of its success was the largest sugar factory in the country and had over forty-five hundred employees.

My father’s excitement about seeing this building up close as well as the elaborate construction it seemed to be undergoing had me thinking. What is the history behind this site and what was its future? 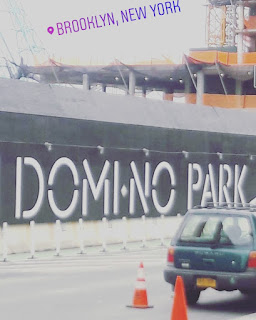 Domino Sugar was created by the Havemeyer Brothers in 1807 and was originally known as the W. & F.C. Havemeyer Company. The name was changed in 1900 after five smaller companies had been acquired.

The building site we known now was constructed in 1882 and achieved landmark status in 2007. If you don’t know anything about the preservation of historical places you can read all about it in a previous Find Out Friday (https://bit.ly/2HYJICw). 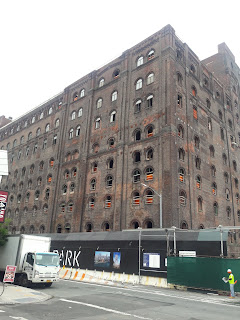 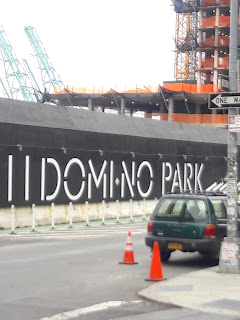 The factory has not been in operation since 2004 and the status of what was to come had long been debated. It was scheduled for demolition but now there are great plans for the future of this eleven acre site.

The entire lot was purchased by Two Trees Management in 2010, and along with SHoP Architects the plan now includes:

All of the outdoor space, which includes some beautiful fountains and machinery from within the factory that will be repurposed as art, will be connected via a twelve hundred long walkway alongside the river. You should check out the link below to see further details and the photo renderings. It looks quite stunning.

Some of you might remember the infamous sculpture done by artist Kara Walker that was exhibited inside this building during the summer of 2014. The piece was entitled “A Subtlety, or the Marvelous Sugar Baby” and served as “an homage to the unpaid and overworked artisans who have refined our sweet tastes from the cane fields to the kitchens of the new world” - the artist’s words, not mine.

The sculpture itself looked like a giant black sphinx and was eighty feet long and forty feet high. Inside there were eighty tons of sugar which had been donated by Domino Foods (a.k.a. Domino Sugar). There were several smaller figures that surrounded it which were made by boiled sugar. The work had been commissioned by Creative Time.

I love that what is old will now be new and useful again.

I cannot wait for the entire area to be completed so that I can visit it and no doubt write about it.

There is nothing I love more than visiting a historical landmark to appreciate its continued influence within the community at large.