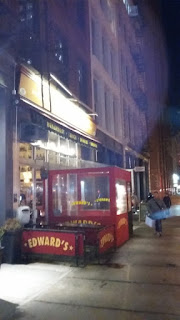 If you are free the last Monday evening of any month and you are looking for something unique to do for dinner than I suggest you visit Edward’s. Edward’s is located in Tribeca very close to a bar I like quit a lot (http://bit.ly/2gPZwMp). I have been trying to get to Edward’s since that visit earlier this year but it took until November for me to get there. Story of my life, I know. 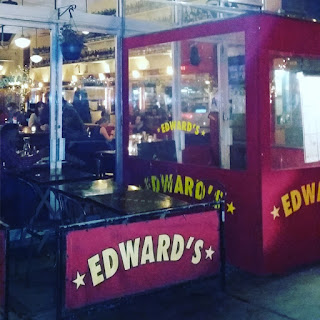 Edwards opened in 2001, owner Edward Youkilis happens to also be part owner of Lucky Strike (http://bit.ly/2h5pn0M) another place I like to visit quit a lot.

Edward’s serves a pretty typical menu including salads, burgers, pizzas, just about anything you could ask for from a diner establishment. However on the last Monday of every month they add something quite unusual- it is an event called Cincinnati Night.

I found out about through a friend so since she was the expert she was also my date that evening.

When it came time to order I realized that it was unlikely I would make it here again anytime soon, so I decided to go big or go home with my order. My friend and I split a Coney, which is a hot dog on a bun, topped with onions, mustard, chili, and cheese. Then we each ordered a 5-Way- spaghetti topped with chili, cheese, onions, and beans. For a girl who has never had chili before I was really flying by the seat of my pants. 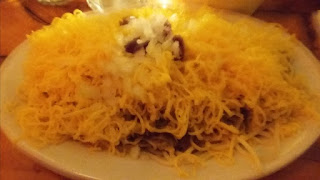 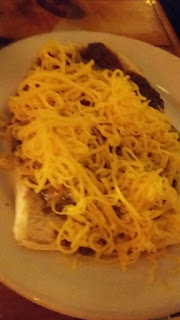 The food came right away and now I know why. Practically nothing seemed cooked or rather hot in temperature. For an Italian girl eating cold spaghetti without marinara sauce and cheese that has not been melted took some getting used to. I am not sure I ever quite did. The flavors did go well together and I was a fan of the chili although I think I would have preferred it hot off the oven but still with onions, cheese, and beans. I might be able to lose the spaghetti altogether. I had my full about half way through but later on that night I did regret not taking the rest of it home. It was sort of like eating Chinese food, after a few hours you start to crave those flavors again.

I did like the Coney version much better but the toppings were too heavy and the poor bun gave out. Next time I think I need to tell them to double the bun, just like asking for a double bag when you are grocery shopping.

Most importantly it is now off my current to do list (http://bit.ly/29H6zRG).

The key ingredient to Cincinnati Night menu items is Skyline Chili, made; you guessed it in Cincinnati. I am unaware it if is shipped to New York City once a month to create these dishes or if the same recipe is used. Why this can happen only once a month is also unknown but not entirely surprising. I had a diner by my house in Brooklyn that wouldn’t make wraps between the hours of four to ten p.m. There was never a proper explanation or reason for that either.

As for Mr. Youkilis he is originally from Cincinnati and found that there was a community of fellow Cincinnatians who missed their beloved Skyline Chili just as much as he did. This night has become a popular pilgrimage for this reason. Reservations are a must and they can be taken about a month ahead of time.

According to an article in The New Yorker, Mr. Youkilis said:

“I hired all these Cincinnati kids as waiters, and one of them, his mom sent him some cans of Cincinnati chili as a present. Me and this other kid—a bartender from Dayton—we started eating it in here and people started coming in off the street, asking, ‘Is that Skyline chili?’ So I thought maybe we could make a night of it.”

It became an official monthly event beginning back in 2006.

What surprised me most about this article wasn’t the information I hadn’t found anywhere else but rather who the author was, Mr. Jeffrey Toobin. I checked to be sure and yes he is the same Jeffrey Toobin I know from CNN, the New York Times, and most recently as the author of the books about Patty Hearst and O.J. Simpson. FX used the later to create their very successful series, “The People vs. O.J. Simpson, American Crime Story”. You can imagine that I never thought in a million years I would be seeing his name next to Edward’s but that goes to show you that a writer has limitless possibilities.

Besides the knowledge he has imparted on me I would also like to thank Mr. Toobin for now I have had “On Top of Spaghetti” stuck on my mind all damn day.