For Find Out Friday - Why Are Pigs and Bullets So Sweaty? 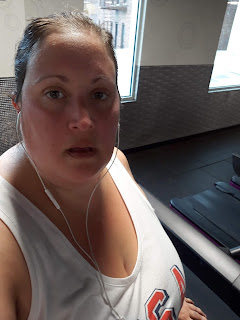 This is me after forty-five minutes on the treadmill at the gym.

I am not sharing this because I think I look good or particularly hot this way.

I am sharing this because I have to know, why is it when we sweat that we feel the need to use the phrases “sweating like a pig” or “sweating bullets”?

I use these phrases so often that “sweating bullets” was even the title of one of my videos on my Youtube channel (that video can be found here: https://bit.ly/2kzn0KN).

So I ask you, are pigs and bullets really that sweaty?

What is the origin of these expressions?

First of all, it turns out that pigs do not actually sweat that much. Instead they roll around in the mud to cool down. Turns out in previous years when my chronic migraines used to make me sweat like I had malaria, I would have actually considered that as an option, it if would have helped.

In those days a substance called pig iron (a form of iron ore) was heated to extremely high temperatures thus creating a liquid metal that could be molded. These molds were shaped into small pieces that could be broken away which greatly resembled piglets suckling on a sow.

However, before that could happen and the liquid could be safely moved, it had to cool down. The way the iron workers knew when it was safe to transfer the molds was once the “pigs had sweat” AKA droplets of water would begin to form on the metal’s surface.

In case you are wondering what other animals sweat as much as humans, the answer is primates (i.e. monkeys, apes, etc.).

As for “sweating bullets” that phrase can be traced back to a religious origin. Closely related to the similar phrase “sweating blood” which is found in the King James bible as the description of the suffering of Jesus Christ: “And being in an agony he prayed more earnestly: and his sweat was as it were great drops of blood falling down to the ground.”

Other suggested explanations are that those who are sweating profusely have sweat droplets that are as large as bullets. Though it is important to remember that this phrase is more commonly used to describe someone who is extremely nervous and not necessarily literally sweating.

All this being said, I don’t care how you describe me in that photo. I call it success.

For Explanations About Other Pop Culture Phrases: