For Find Out Friday - What is the Story Behind the Greatest Toy of All Time? 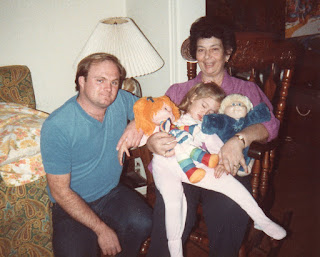 Pictured: Me passed on my grandmother, my dad, and my two favorite possession.

I didn’t think I had a clear answer for either question until a comment on a friend’s Facebook made that memory coming flooding back.

Though I do not know the exact day, I do believe that I was about three or four years old. The memory consists more than of a mere moment in time. It is rather the best afternoon I had spent in my young life where I was seemingly in a world immersed in my then favorite thing: Cabbage Patch Kids.

If you grew up in the early 80s like I did, changes are you wanted a Cabbage Patch Kid. This was not an item desired by only girls either. Cabbage Patch Kids were the hottest toy out there; back during the times when all young children eagerly awaited the arrival of the Christmas catalog from Sears so that we could make our lists for Santa. It was a glorious time to be alive.

I only had one Cabbage Patch Kid and I have some subconscious feeling that mine fell off the back of a truck. However, she was beloved by me nonetheless. Desperate times call for desperate measures.

The memory I have is crystal clear. I remember being in the car with my parents driving into Manhattan and seeing the skyline. Then, miraculously I was in there: General Hospital!! No, not the soap opera on ABC, but the land where Cabbage Patch Kids were born!!

Officially called BabyLand General Hospital, was a place where you could watch them be born (from cabbages, duh) and you could then adopt them on the spot Since they were not dolls or toys, they were adopted not purchased. You got to name them, fill out the adoption papers, and promise to give them a good home.

This was taken very seriously. Staff working there wore scrubs and carried medical tools. Injured kids were taken into “surgery”.

I just learned that any “baby” or “kid” that was adopted could not be returned whether they were obtained from BabyLand or Toys “R” Us. The only stipulation was if the box had never opened.

BabyLand General Hospital also had a slew of other clothes and accessories you could purchase for the kids you already had. I still remember exactly what I picked out: denim sneakers that had tie dye print on the bottom (it was the 80s). I hope I still have them somewhere.

If I had been older I would have taken a million pictures of this magical day but to my knowledge none exist, none that I have ever seen anyway. No matter, that day clearly left an impression on me.

Cabbage Patch Kids as they came to be known, were originally called Little People and were the brainchild of Xavier Roberts.

Xavier Roberts (each one bears his signature on their backside as a “birth mark”) hand made his first one in 1978, as just twenty-three years old. By 1982 they were being mass produced and no longer being called “Little People”. Eventually Hasbro and Mattel took turns owning the company that created this billion dollar industry but as of today it is owned by Wicked Cool Toys.

The story told online and on each box about how Cabbage Patch Kids came to be is:

Despite a New York Times article (see link below) I found from 1985 (I was four years old), I found no other information about BabyLand General Hospital residing in NYC. I don’t even know how long it was open.

What I do know is that BabyLand General Hospital was first open in Xavier Roberts hometown of Cleveland, Georgia in the space of a former medical clinic. As of 2010, BabyLand now resides on a seventy-five thousand square foot hilltop estate that sits on six hundred and fifty acres along the Georgia mountains.

Now, though I am grown, I am will be just as excited when I visit BabyLand General Hospital the next time I visit Atlanta. After all, it is less than a two hour drive. Be warned there will be MANY pictures to come.