For Find Out Friday - Are You a Six or a Nine? 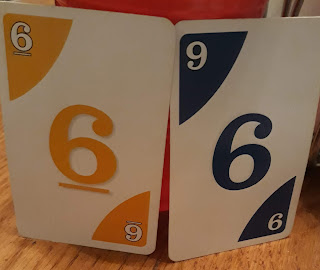 Every Saturday night is game night at my house.

Mostly we play cards and without fail every week my mother will ask: “is that a six or nine?”

My answer is always the same: “do you see an umlaut?!”

I first learned the word “umlaut” from watching a rerun of “The King of Queens”. Not only is that show on nearly everyday on one channel or another, but I also fancy myself as a Carrie, meaning she is naturally funny, brilliant, and of course a bit abrasive.

In the episode entitled “Clothes Encounter” (see link below) Doug is trying to return shoes for Carrie that she has already worn but cannot afford to keep. The excuse he gives as to why his wife no longer wants them has to do with the size. The cashier (who explains in her Germany accent) that the size is correct because it has an umlaut on it; indicating a half size.

Needless to say Doug leaves with the shoes in hand.

But that scene has always remained fresh in my mind, either because I learned something, I have seen it a hundred times, or more likely both.

So naturally when I looked up the definition of umlaut I thought I knew what I would read.

Turns out I was wrong.

According to dictionary.com umlaut is: “noun: a mark ( ¨ ) used over a vowel, as in German or Hungarian, to indicate a different vowel quality, usually fronting or rounding.”

Now those marks are not the dash I see on a “6” playing card nor is it the dash Doug Heffernan saw on his wife’s shoe.

So that begs the question; have I been lying to my mother week after week?

I thought this would be a super easy question to answer when I decided to tackle it but it turns out there is little information on this subject. When I entered these phrases into Google I mostly found sites about how to teach small children to read or the rules behind popular card games.

When I am hosting game night, we are often playing Phase 10 when this issue arises. So while I didn’t find the exact information I was looking for, I did however, find out the origins of this game.

It turns out that Phase 10, which is manufactured by Mattel, was created in 1982 by Kenneth Johnson. It was purchased by Mattel in 2010 from Fundex Games.

The objective of the game is to be the first person to complete all ten hands (AKA phases). The game is based on a kind of rummy called Liverpool Rummy. It uses a special set of cards and can be played by two to six people. It is quite popular, and not just in my household. In terms of sales in comes in second to only Uno.

So while the verdict is out on the whole umlaut debate, the only conclusion we can all agree on is that Phase 10 should be a weekly event in your house too.