For Find Out Friday - Who Put the Moo in My Mother? 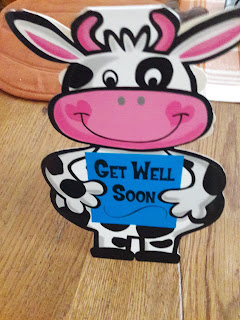 As you may have noticed I have been rather mute where my blog posts are concerned. The last blog I posted is over four weeks old and there is a very good reason for that: my mother had open heart surgery.

Anyone who follows me on social media will notice that my mother is a frequent presence in my photographs as well as blog travels. You could say we are two peas in a pod. That sentiment has only grown stronger over this past month.

The reason I am divulging such personal information is for a good cause; education.

The type of surgery she had was to replace her aortic valve. She had a congenial condition officially known as aortic stenosis, which meant that the valve was increasingly becoming narrow and would, if left untreated, close. The end result would be sudden death a.k.a. a heart attack of which she couldn’t be revived from.

Finding all of this out was beyond terrifying and traumatizing. But as I kept reminding my mother, this was the best worst situation. I said that because while no one wants to undergo such a major operation, I was ecstatic that there was a way to cure her condition.

During the surgery she would receive a new valve, from a cow, which would in turn save her life.

By the grace of God and the very talented surgical team from Columbia Presbyterian Hospital, she is well on her way to making a full recovery.

Now that the worst is behind her (us) she keeps asking the same question over and over again: “Where did Elsie come from?” That is her way of phrasing the question “How do doctors get the countless bovine valves they use to save human lives?”

I had no idea.

My initial reaction to her question was to wait for our post op visit to the surgeon. While I still intend to ask him, I decided to resort to old habits and do a bit of research myself.

Surely I did plenty of reading while we were going through pre op process but this was the only issue I didn’t focus too much on. I knew that patients had two kind of valve options open to them.

The first was a mechanical valve which no surgeon we met with recommended for her. The main reason for that being that after surgery you would need to remain on blood thinners for the rest of your life which comes with its own set of risks.

The second is a biological or tissue valve. These valves can come from a cow or a pig but cows tend to be the top choice. I have learned just today that the reason is that cows have a very similar anatomy to humans.

The very first heart valve replacement surgeries were done in the early 1960s. Back then valves were typically donated from cadavers or created with a series of complex mechanical tools. However it wasn’t until the late 1970s that the first porcine (pig) valve was created thus also eventually leading to the use of bovine tissue although I had trouble nailing down a date for its origin.

What I did learn is much what I had expected. For both pig and cows, the source of the aortic tissue that is used comes from animals raised purposefully for slaughter, where this life saving tissue would have otherwise been discarded.

No matter which animal tissue is used there is a process it must go through to be treated and prepared before it can be used successfully by a human. There are several companies who do this important work such as Edwards Lifesciences in Santa Anna, California. I hear you can tour the plant that manufacturer’s the heart valves which is something I really intend to do someday.

This company’s founder, Miles “Lowell” Edwards had a mechanical background and was set on building the first artificial heart. He worked alongside Dr. Albert Starr, a surgeon working at the University of Oregon Medical School. Within two years their dream would become realized. The lab and its technologies continue to lead in the development of products necessary for heart surgery.

While I could drone on and on about the science of it all, that would take longer than a simple blog post.

Instead I will highlight some of the fun facts I gathered as per interview conducted by Adam Pick (see first link below):

The fact that any of this is possible and my mother only has a three inch incision as proof that it happened is all a miracle in my book.

Now whenever I am in the presence of someone eating a hamburger I will be reminded of the animal that gave its life not only to nurture us but also to save the lives of our loved ones.

I know I will never forget what this experience has taught me or how grateful I am for the outcome.